So I recently purchased a 10 lot of the Iris 3326-L motion sensors in order to add motion to the other rooms of my house. As a result, I like the ability to turn the motion detection on and off at will. At the moment I just want to do it through Alexa but don't really want to have 5 different voice commands that my family and I have to remember, one per room.

This is when I had the idea to use the wasLastSpokenTo attribute of the Echo Speaks devices and my hope was to have a single "Motion Detection Switch" exposed to Alexa. Then I planned on having RM handle which Alexa that was spoken to and turn on or off the motion detection for that corresponding room.

Now for a single room this will work since Alexa will trigger the main switch and then a if-else tree will turn on/off the corresponding motion disabler/enabler switch. However, if I want to have multiple rooms that is where the issue comes in.

To my knowledge triggers only come when there is a change of state, i.e. on -> off or off -> on. So in my case, let's say that we are trying to disable motion sensing in two rooms, in the first room, the switch exposed to Alexa would turn off, and then the if-else tree will function to turn the corresponding switch off. But the moment someone in a different room tries to turn the motion off in that differet room, that main switch is still off, so RM will not detect a change of state and thus will not trigger.

This is my issue, I want to be able trigger a rule whenever a switch gets an on or off command, not just when it's state changes. Any ideas on how to do this or an alternative approach that would not have this issue would be greatly appreciated.

Update: I seem to have thought up a workaround, instead of having a single main switch exposed to Alexa, now I have two switches, a "Motion Detection Off Switch" and a "Motion Detection On Switch". This allows me to reset the state/data of that main switch without false triggers. I then have two RM rules, one that handles turning the motion sensing off, and one that handles turning it on, as shown below: 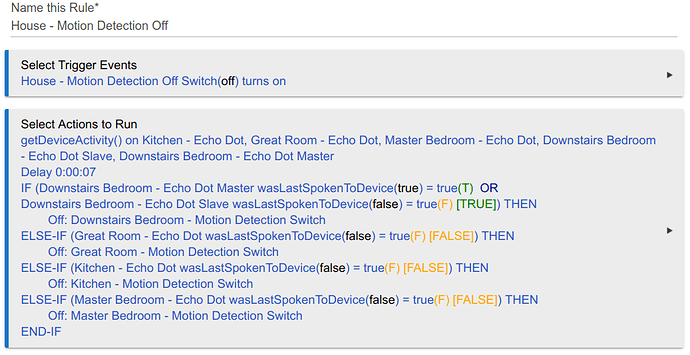 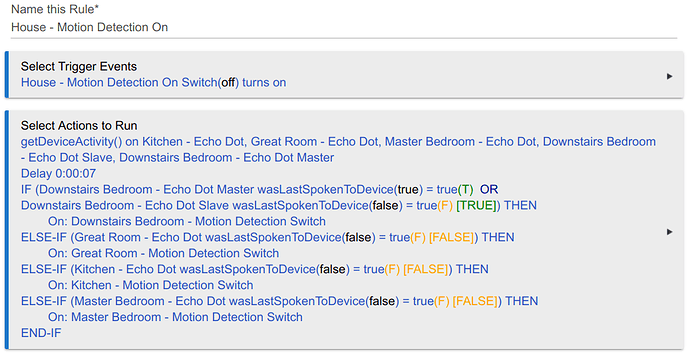 image1037×534 85.6 KB
Note: The delay of 7 seconds seems to be necessary at least for my network for the states of each of the echo dots to be updated. When I had this delay at 5 seconds, the wasLastSpokenToDevice attribute did not seem to be predictable for all devices. YMMV with this delay.