As I'm sure you all know, Iris V1 was based on AlertMe tech developed in the UK. I was an early adopter of that system and currently have my AlertMe (ZigBee Gen 1) network running with a SystronicsRF hub. After some fighting I also have some Xiaomi Aqara devices connected on the Gen 2 side.

Though I've been having some success with the SRF system, Hubitat has caught my eye as it follows a similar 'local processing' methodology, but with more encouragement to tinker and get under the hood. So, has anybody else here attempt to pair original AlertMe devices - not Iris, but the UK models? They were very, very similar devices - in many cases identical except for changes to the colour of the plastic. Just in case, how does Hubitat cope with devices that haven't been completely profiled? And because I rather like my Aqara gear, would I require a second hub and HubConnect to run two ZigBee (not Z-Wave) networks?

I can't speak to this personally as I don't have any devices, but I can say that HE does support Iris v1. There is a specific button for it when pairing:

in addition to what dman2306 said, I have xiaomi devices on my hub, but need to be careful about your repeaters with Xiaomi devices, and reported success is varied. There are many threads on here about xiaomi devices.
If you do decide to switch, I think you'll be very satisfied. Just check out the community, it's amazing

The v1 keypads do not work as well as the range extender.

Yes, it's the community and ethos baked into the tech which is really tempting me. For reasons I can't fathom SRF seem dead against an API and interoperability that hey haven't built. That's never sat well with me.

Are there any means of getting hold of a Hubitat hub in Europe at the moment, or are we all just waiting for them to come back into stock?

SRF hasn't had a system update in about 6 months.

Great stuff. There's no AlertMe keypad, but I have motion sensors, contact sensors, many UK smartplugs, a 'PowerClamp' for measuring incoming mains supply (basically identical to a smartplug in reporting except no switching control). Think that's the lot.

They made a fun little RGB lamp, but I'm guessing that's not supported. What's the deal with equipment that's not been profiled / had driver written? It would be amazing if they had an interface to allow unknown devices to pair, then you just pressed buttons, the system showed you what it received, you give it a label and a picture and you're off.

Yeah, last update was 24th January. It's all a bit too quiet around there for my liking.

I moved on about 3 weeks ago. I had great hopes for them. They went down a rabbit hole and never came back.

It would be amazing if they had an interface to allow unknown devices to pair, then you just pressed buttons, the system showed you what it received, you give it a label and a picture and you're off.

Yes this happens on normal ZigBee stuff but I don't have any of the v1 stuff to check that it's the same, but I would expect it to be. Basically any capable device will join as "Device" and you can use the logs and debug to work out what it's spitting out. You would then need to work out what that was and write a driver for it to then get it working on HE.

AMAZING. As soon as I can get my hands on one of these hubs, I'm on board.

So, has anybody else here attempt to pair original AlertMe devices - not Iris, but the UK models?

So, has anybody else here attempt to pair original AlertMe devices - not Iris, but the UK models?

There is a group of Hubitat users in the UK/Ireland (Hubitat).

Perhaps one of them has tried pairing AlertMe sensors. Alternatively, since they are much closer to you vis-a-vis location, one of them might be willing to attempt pairing a sensor you send them.

I have quite a bit of Iris stuff, and I bought some keyfobs from someone in the UK a while back. I just repaired one I wasn't using, and it paired just fine. 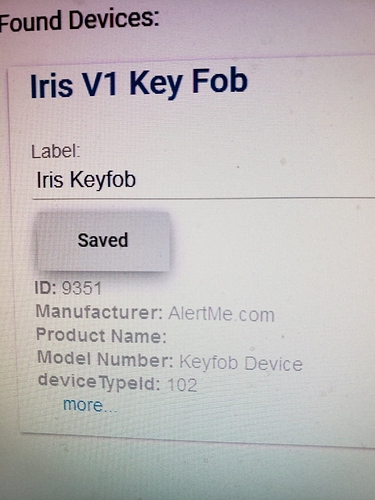 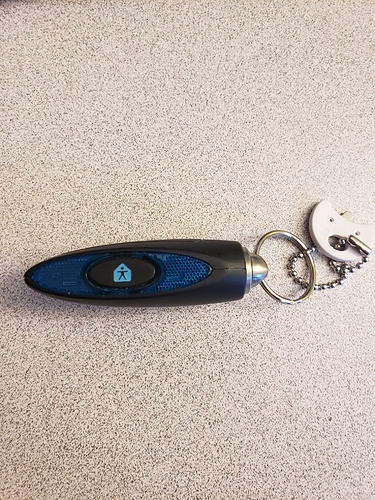 They’re the ones. The originals from AlertMe are white and orange, those are from the British Gas Safe & Secure system. Hardware is identical and I’ve already spotted somebody has had success with the motion sensors I have. The UK SmartPlugs are the only component I’ve not seen reports on, but I’m confident they’ll work.

Including the original system this will be the fifth these devices have been used with! AlertMe, BG Safe & Secure, PyAlertMe, SystronicsRF and now Hubitat.

I just wish we could get a driver for the V1 keypads....Great hardware really.

Interestingly, they (at SystronicsRF) did do quite some work to get support for the keypad, so I believe, so third party support is certainly possible. It was made for the Iris system and 'drivers' never existed for it on the original AlertMe hub, so I couldn't bodge one on to my old setup.

Straying a little off topic, but I used to maintain a third party iOS app which was an alternative front end to the AlertMe system. You could pull some interesting data out of it and when they closed down one of the helpdesk guys was good enough to send me the complete logs of everything my system had ever done. I was amazed, there were many gigabytes worth.