Maybe this is the driver??

Doesn't mention that name or model in the driver -

In my post above there's a screenshot showing the Device Details of a device with a red circle on it highlighting the "model".

What does that show for your device?

The driver should identify the version of the button that you have.

Can't see exactly that window for it, this the the best match - 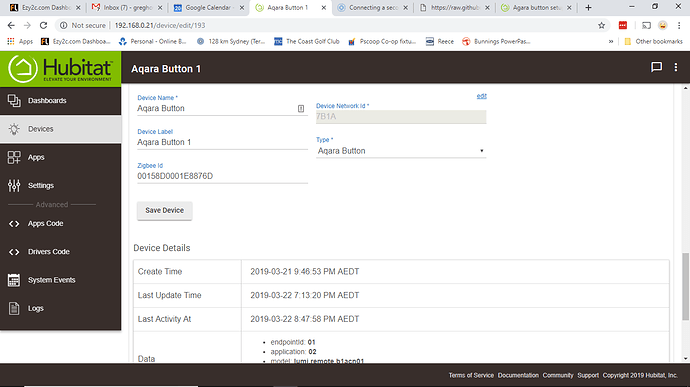 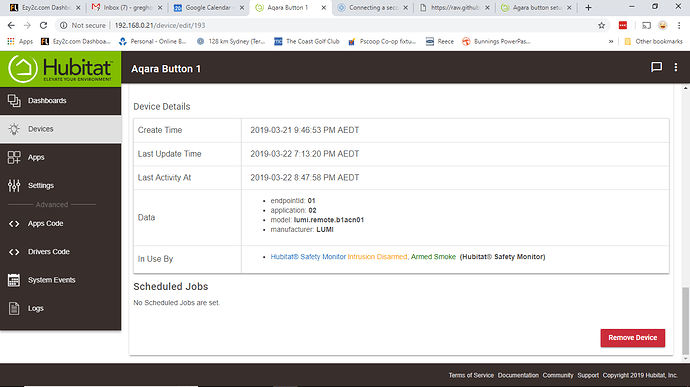 I'm finding that info in 'Devices' Then I select the 'Aqara Button' then the screen prints in the previous post appears.

That tells you that you have the "new revision":

And the driver offers the following capabilities for it:

Which is the one I've loaded?

I think you are missing the point

You've loaded the right driver, you don't need to load anything else.

For the device that you physically have, the driver offers the capabilities that I listed before - i.e. single click, hold, release and double click on button 1.

From what I can see from the Event log, the device is working correctly.

You should be able to use those capabilities in HSM or Rule Manager?

So its the correct driver, is it only a single button though??

Maybe to put another way, that physical device does not support triple click in hubitat.

And double click shows up as a double tap event, not a different button press.

Single button, with the single button having different events depending if you hold or double click the button.

Thanks for all the advice.
Is there somewhere I can find instruction on how to set up the switch to do different things based on the amount of clicks (or double tap event) or hold in HSM?
I want the button to 'Disarm on 1 tap, 'Arm-Night' with 'Double Tap'

I thought you wanted this working in HSM from your OP?

Thanks the 'Disarm' is already working in HSM, I disarmed it this morning with the button. I'll have a look through the doc in the link after golf. Thanks again everyone.

It's done. I set it to change the 'Modes' in the same way as I have it set via 'Life360' to arm & disarm HSM. That was easy, thanks again

I'm a little late to the party here...

@greghoward1962 - I am sorry about any confusion with the button models and their capabilities, but I have to point at Xiaomi for the source of the confusion by using the same printed model number on the exterior of what are clearly very different models. They have done the same thing some of their other ZigBee products, and it is truly frustrating trying to find a way to properly document and explain the differences in a way that everyone will understand.

The method I've used on the SmartThings platform to help users identify which model the have just paired is to start with a suggested device name that indicates the model and revision, for example "Aqara Button WXKG11LM (new revision)", but for some reason Hubitat doesn't allow for the custom name to be suggested at pairing.

Another thing that caused you confusion was the difference in types of events created for different button actions between the two revisions of model WXKG11LM. While in SmartThings only "pushed" and "held" events are supported by name, the Hubitat button implementation allows for "doubleTapped" and "released". With the new revision of the WXKG11LM it made more sense to use all of those different event types tied to button #1 from the hub's perspective, whereas with the original revision of the WXKG11LM I stuck with the older implementation of a different button number for each action (i.e., the number of clicks is aligned with the button number of a "pushed" event).

Based on your experience, I will look at adding some way to reveal the revision in the device information page, because although it is given in some log messages during pairing, most users don't usually have a logging window open at the same time they are pairing a device.

It appears you've got the button working for you in the end, thanks to the help of some of our fabulously supportive users here in the Hubitat Community. If you have any other questions, please let me know, though!

Yes all good now . I just need to setup something to up to indicate that the button has worked, Probably get one of my Sonos speakers to make a noise or a light to flash or something like that?

If you set up Sonos, have it say armed, armed-home, or disarmed. Chromecast works as well. Even notifies you if there's an arming error, and will tell you the device name so you can resolve it easily. Simple in HE 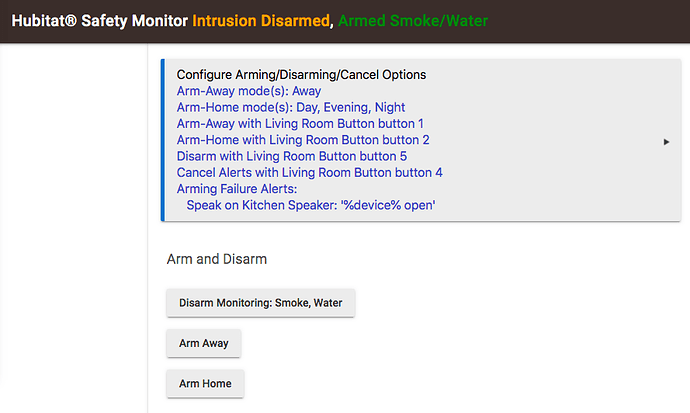 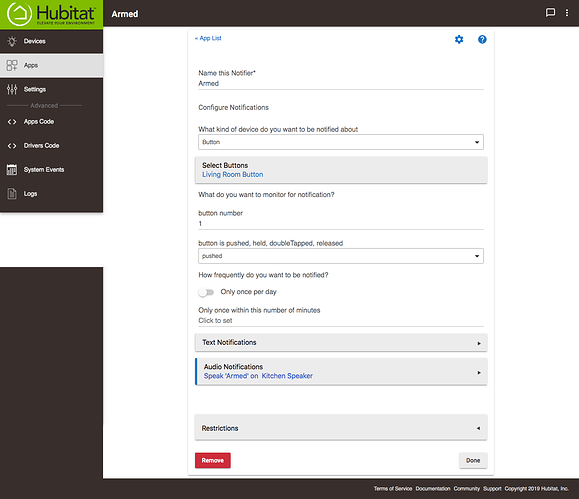 Thanks, I've set that up, see how it goes tonight.