Has anyone successfully configured this water/flood sensor? It's Z-Wave based and I can get it included onto Hubitat as a contact sensor, but the only data it is able to pull from it is the battery level. I've tried adjusting the device types and currently have it as a Generic Z-Wave Water Sensor, but triggering it does not change the status of the device.

It's older and not currently available for sale, but its nearly 4-foot cord is nice for some applications.

I have one of these and had to include it up close to the hub. But once it came in moving it was fine. Try excluding again and including up next to the hub. Mine shows battery and water as status. I am using generic z-wave water sensor as a driver.

Yep, that was it. I had to do a Force Remove on the device as excluding it didn't work, but after factory resetting the sensor and including it again, it worked. I changed it from a contact sensor to the Generic Z-Wave Water Sensor and triggered it and the "water: dry/wet" status showed up on the device.

Thanks! Those two were the last holdouts of my 70+ devices to successfully move over and everything's looking good.

Welcome. I knew that one was a finicky one. Glad it worked. It is always nice to get those last ones working.

I think I ran into the same problem last night. I have an Aeon (Aeotec Labs) water sensor which was joined to my Homeseer network and I wanted to move it to my new Hubitat. After removing from the HS network, I couldn't detect it until I physically moved it close to the HE. The HE detected it, but the status was always "?", not the water drop icon that appeared right away with a SmartThings Zigbee sensor. I initially thought it might not be compatible with the HE, so I place the probe in water to check the events and, voila, a water drop appeared along with status "Wet". In hindsight, it's a bit confusing to not show the water drop right away. Not everyone would think to trigger the device.

I have the same sensor and I was porting it over from ST to HE too. I had no issues with inclusion (tried it 2x).. and similar to one-2-three-4's situation when it pairs it defaults as a contact sensor. When I switch to Generic Z-wave Water Sensor the only state that I get is the battery level. I don't see anything in the Edit Device panel nor the Dashboard that gives me any idea that it's a water sensor or that it's dry. Should it say so? (see attached pics) . I also tried to trigger a notification for when it's dry and that doesn't work either. Unfortunately testing it for a wet condition is a not easy given its strange location. Any advice? Thanks! 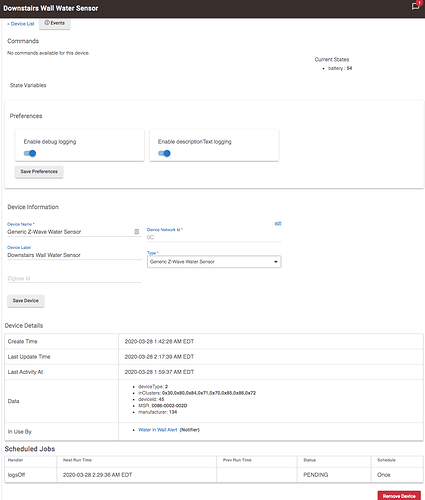 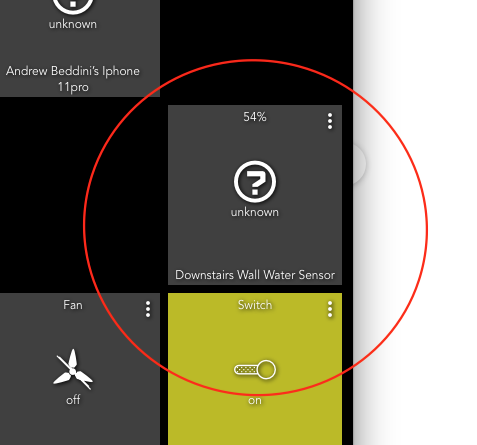 I just added one (found it in my bag of leftovers) and am having the exact same problem. Have you tried anything else to get this working?

No, I haven't tried anything else.. all I get are consitent battery logs.. but it's not say that it's not working.. I just don't have easy access to the sensor lead.. If yours is connected.. I assume you tried to test it with water?

I have eight of these. They've been working fine on Hubitat for more than a year. This is what the device page looks like: 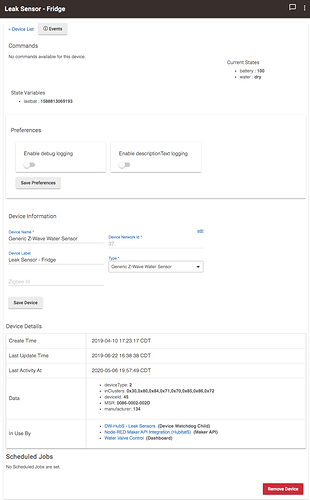 Its been so long that I don't remember if the wet/dry status only showed up after I first tested the sensor. But I do recall testing each sensor after pairing it. And the ones in the bathrooms get tested every two weeks when the maid cleans/mops.

Also, I did pair these very close to the Hubitat. As a general practice, I suggest pairing all z-wave devices (as opposed to z-wave+) very close to the HE. They're much slower and I imagine there's a fair amount of configuration data to be sent during pairing.

Once I tested by dipping in water it worked! But no configure button on the screen. Thanks for the suggestion to try it out!