I'm trying to join an Aeon Labs DSB29-ZWUS (FCC ID: xbadsb29) I can easily exclude it and it seems to start the include process but never proceeds beyond initializing, even right on top of the hub. Any ideas? @mike.maxwell does Hubitat have driver support for this? I searched the model number in the forum and came up empty, so figured I'd ask. 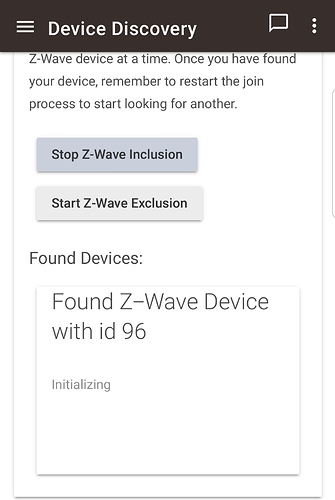 If it has a tamper switch, sometimes it needs a little fiddling

It works on some devices. Worth a shot.

Thanks. I tried tapping (even holding) on the tamper switch a bit too. Still didn't pair up. Seemed to be that Hubitat just recognized it was trying to join but didn't move beyond initializing.

Should automatically join S0 unless it’s a lock or garage door opener. @rayzurbock Do you have a minimote or Z-Stick? Or even a ST hub to do a general exclusion on it. Sounds like it needs some motivation, else then a garbage can is in its near future.

Didn't realize that old sensor only had the tamper. No action button. To reset those old sensors, a Z-Stick or Minimote is probably all that's going to work. You can try keeping it awake for 10 min by 3 quick taps of the tamper or 3 rapid swipes of the magnet, but you may still have a problem including it without the Z-Stick or Minimote.

The Ring contact sensors are nice and fast. There's no dedicated driver, but if you open their cover, put in their battery when you start inclusion and then immediately tap the tamper button a few times, they easily include. Then just use the Generic Z-Wave Motion Sensor driver and hit configure. You'll get battery, tamper reporting and active/inactive motion reporting. $40 for two Ring contact sensors vs $45~55 for a Z-Stick if you don't already have one.

Like Rayzurbock, I too have 3 new Aeon Door/Window Sensors (2nd addition) DSB29-ZWUS.
These units have both tamper switch and an internal action button.
All three unit operate exactly as published.
They all exclude and include identically and correctly using the Hubitat.
The driver populates/operates and reports status correctly for all 3.
LEDs behave correctly and indicate appropriately.
When the units initially come alive they will toggle and indicate either "open to close" or "close to open" ONE TIME ONLY.
Thereafter no further switch status changes are reported, however the LED indicator appears to indicate correct open/close movement.
All three units behave identically which would lead me to believe this is not a hardware issue.
Any ideas please?

Disregard all of the above. I found the driver Rayzurbock recommended...

Where can I download the driver you mention (from rayzurbock)?