I don't typically post things in forums. I lurk and search (and search and search and search) to get questions answered, rather than making new threads. That being said, I never really found a clean example of what I was trying to accomplish, so I figured I would post a topic for others to give input for improvements or allow future searchers to find this a bit faster.

So, as the title suggests, I have a smart switch running Tasmota (Treatlife 3-way, set up following a guide posted by digiblur rather than just using the template from blakadder; had to open it and serial flash the chip) and left the other end of the circuit dumb. The smart switch is installed in the first switch in the circuit (the switch receiving the "line" power, as opposed to the switch connected to the "load" wire). Mechanically, everything works exactly as it should as soon as things are wired up. When it gets complicated is controlling it with HE, any voice assistants, etc. This is because the 3-way switch uses 2 relays to allow the circuit to complete. Line power comes in, and then it "goes out" via relay 1 or relay 2. When the switch is added to HE via Tasmota Device Manager, it adds both relays as individual devices. Using the one relay ("Toggle 2" in my case), you can remotely turn the switch on and off. Great. But the problem is when the dumb switch is "on," this then turns the other relay on, which essentially reverses the relay you were just using to flip the switch remotely. No big deal, except that if you're using this "toggle 2" relay as your remote switch, and it is now reversed, HE will see it as on when the lights are physically off, and vice versa. 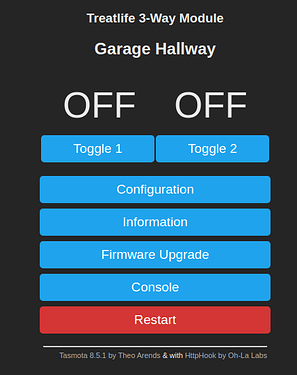 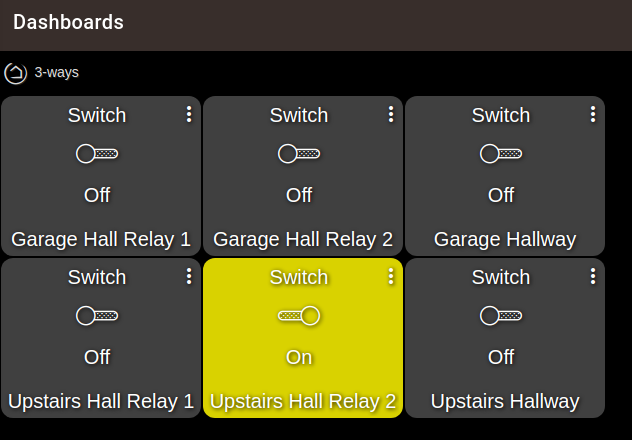 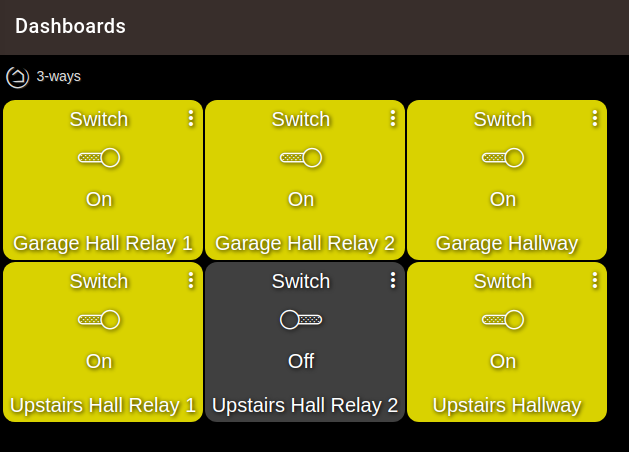 Depending on the position of the "dumb" switch, the relays that HE change 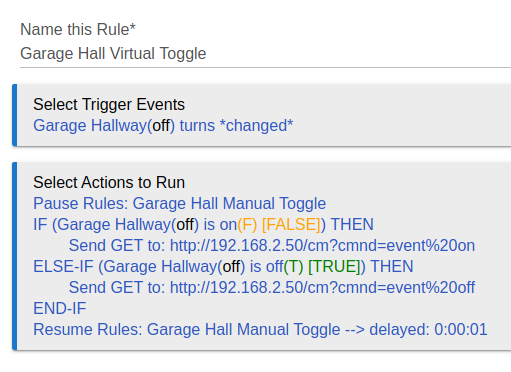 The pause at the beginning of the virtual toggle stops the "manual rule" from seeing the change in relay positions and sending another command to change the lights again. 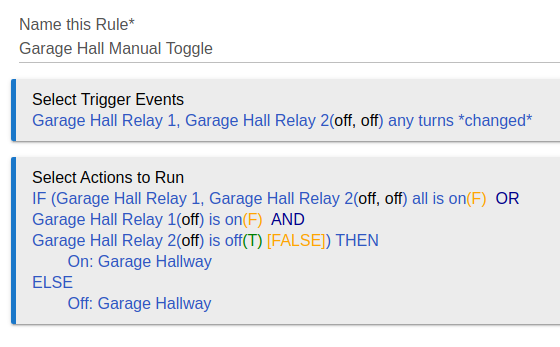 This has been working for me thus far (about 12 hours of playing with it). I opened up the virtual switch to the voice assistants and that seems to be working out as well. Another side note, one of my circuits also includes a 4-way "dumb" switch between the smart switch and the other 3-way dumb switch, that ultimately doesn't change anything as far as the smart switch is concerned, so if somebody has that setup, this seems to be working for that as well.

Like I said at the outset, if anybody sees this and knows of a way to improve it, I'm all ears. Hopefully this will help somebody that is trying to accomplish the same thing and struggling to find a definitive solution.

Sidenote to googlers that stumble across this, I've since abandoned using rule machine and processing of the 3-way stuff on hubitat and moved the operation to a Node-Red "server" I have running on an "always-on" computer elsewhere in the house. The switch is now a virtual switch that gets updated with off and on commands from Node-red, or sends commands to node-red if the switch is changed on a Hubitat dashboard.
I get long winded, so if somebody is interested in how my setup with that works, feel free to respond and I'll come back with screenshots and further explanation if need be.