I want to control a ventilation fan that has two speeds. It is a 1/3 HP, 120v single phase motor with two hot terminals, one for moderate RPMs and one for max RPMs. The motor is rated at about 5.5 amps at full speed. The mfgr offers a simple toggle switch that lets you put hot on the center terminal and send it out one of two connections depending of if you flip the toggle up or down. I'd like to emulate that function in a Z-Wave smart switch.

I think the Zooz ZEN16 multirelay box looks like the right idea, or maybe the ZEN17, not sure. Any thoughts?

Edit: Totally looks like the ZEN17 is the way to go:

Totally looks like the ZEN17 is the way to go

I don’t have this type of fan bug agree the Zen17 relay should work. You can always reach out to Zooz support to confirm.

Another user had a similar request recently...

I might hook this up a bit differently... I would take the hot wire (power input) into the common of relay 1. Then take the NO contact from relay 1 into the common of relay 2. Relay 2 NO contact connected to the fan's high speed input, relay 2 NC contact connected to low speed input. Just wire nuts connecting the neutrals and another for the ground. This would allow relay 1 to power the fan on or off, and relay 2 would be for speed selection. The advantage is that there is no way for the hi…

Yep! That looks like a good way to emulate the DC Motor feature of the ZEN17 via two tier relays. You'll never get both sides of a relay energized at once so no threat of sending Hi/Lo to the fan at once. The DC Motor software feature does this inside the device, which I've observed in practice causes the relays to flip rapidly in series when you send an ON signal to the one not already on. Seems to work reliably.

Update on progress: tried to update firmware via Hubitat C7 FW app, it ran for 5 hours and stalled out. Used a Z-wave stick on a laptop instead. Found that the native ZEN17 driver in v2.2.7 Hubitat has flaws when the device is joined securely, re-joined as no security and the driver is fine. Now working on logic in Rule Machine to get the operation pattern I want. 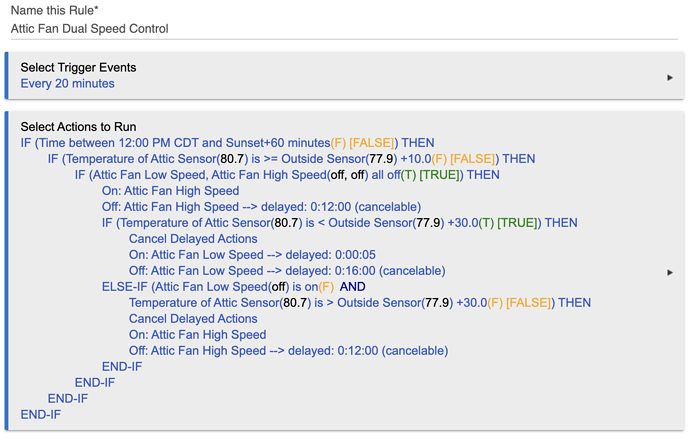 It says: if it's a certain window of daytime, and it's warm enough in the attic to do anything (+10 ambient), then if the fan is off, turn it on HI and back off +12 min later, unless it's not at warm in the attic (below +30 ambient) then flip to LO and turn off after +16 minutes, or if the fan is already on LO and it's getting kinda hot in there (or gotten kinda cool out), switch back to HI and then off.

It works! I had to open up the fan piping as it's a tubaxial and the connections are on the back of the motor housing. Got everything wired up, put a jumper between the C(ommon) relay points for the hot and turned on DC motor mode. High is on R(elay)1 and low is on R(elay)2. Fan starts up on Hi and slows to Low 5 seconds later, just as designed. 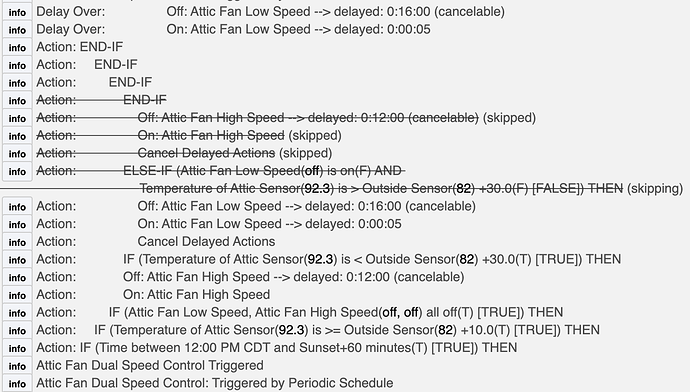