I have an Honeywell Z-Wave T6 pro. For a long time now the drivers have not been reporting status, now lately it no longer seems to be able to control it.

I originally was using the Advanced driver then at Hubitat's recommendation I moved to the "Generic Z-Wave Plus" driver with little to no success.

Currently the "coolingSetpoint" doesn't respond unless one uses the Refresh. And then it seems to wait for some time. Easily more that 30 seconds but it appears to be much longer.

I listed the current Hub firmware but this has been happening for quite some time. The last time I posted this issue several other folks chimed in as having the same problem.

Is there something I can do? I'll willingly test some beta is it would help. 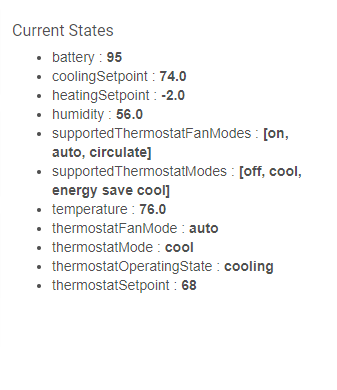 Are you running purely on battery power or do you have the C wire hooked up for 24V power as well?

I have a C wire providing 24 VAC power. I was lucky as the house originally had two wire thermostats.

Switch driver to device. Save. Clear everything. Switch to generic zwave plus thermostat (not plain zwave thermostat) click configure and give it a few mins. If that doesn't work, pull the thermostat then pull the batteries then put batteries back in and mount back on wall (do this regardless of having c wire)