I have a rule with a Boolean variable that didn’t seem like it was getting updated when I thought it should.

The variable should prevent the rule from running more than once, but since it remains false, the rule will run multiple times. 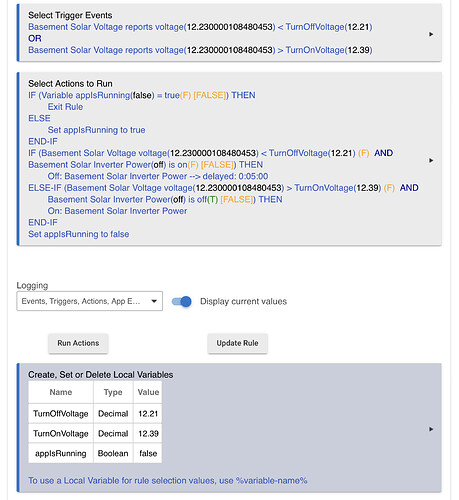 The log shows that the action executed multiple times inside of 5 minutes when it should have only executed in more then the 5 minute delay.

What was the issue? Well, using a Delayed action will schedule the action to occur after the specified time, but the rule will no longer be running.

To do what I want, I had to remove the delayed action and instead add a 5 minute delay before the action.

To do what I want, I had to remove the delayed action and instead add a 5 minute delay before the action.

Correct, an action with a "delayed execution" doesn't stop the execution of the rest of the rule it just delays that specific action. If you want to have the rule execution "pause" for a period of time you need to use "delay actions".

Interesting, I think I used "-Wait for Event: Elapsed Time" , in my rules. Not sure what the difference is.

All "Waits," including "Wait for events: elapsed time," are cancelled if the rule re-triggers. I've started to use these in most cases over delays because it's almost always what I want, whereas delays must be explicitly cancelled (with the most common method being to mark them as "cancelable" and use a "Cancel Delayed Actions" somewhere else in the rule). Otherwise, they are quite similar to a standalone "Delay" action--which, as discovered above, is different from the delay option you can use on an action. A delay on an action schedules that particular action for the specified time in the future, then continues on with the next action instead of waiting there.