Zwave on the C7 is completely unreliable

Hi there. I believe this is my first post here, but I have been lurking on these forums for years, and more actively since finally setting up my first Hubitat hub earlier this year. I have been a Smartthings user long before Samsung. When I bought a new house a few months ago, I took the opportunity to make the switch. During the transition, the old house had Smartthings and the new one had Hubitat.

I've been building the zwave network in this house over months. Many Inovelli black switches, some black dimmers, and some red switches. I had an S0 Zwave outlet switch which I recently removed, and then there are a bunch of Zooz ZEN34 remotes and a couple tilt sensors for garages.

Since April, I don't think a day has gone by that I have not cursed this Hubitat Hub. The biggest problem is outright reliability. I can trigger a switch to turn on directly on the device page, and it's a toss-up if it will ever trigger, trigger late, or not at all. If using one of the Zooz remotes as a button to trigger a sequence, forget it. Between the Zooz's button press registering with the hub or not, and then the hub carrying out the actions... the chance of success is almost zero.

I'm at a crossroads here.

Of these options, I think Home Assistant is most likely at this point. I have some dashboards and integrations running on it now, so I am somewhat familiar with the eccentricities. The main thing stopping me is that I have Hubitat set up and doing exactly what I want if it wasn't for the awful Zwave reliability.

Before I nuke it all, I'm happy to hear if there is some hope on the horizon. Like, some acknowledgement that the drivers are messed up and maybe some software is coming to fix this. My Hubitat hub has an update nearly every other day. Is this related to a problem? The release notes are not for the minor y.y.y.XXXX releases.

If posting my Zwave topology or other stats would help, that's fine too. But, I've been here a while combing through these threads and nothing looks out of the ordinary to me.

I'm mostly just venting and seeing if there is a reason to stop before I go down the Home Assistant rabbit hole fully.

If posting my Zwave topology or other stats would help, that's fine too.

Screen shots of your z-wave details page would help a lot here..

The release notes are not for the minor y.y.y.XXXX releases.

Hubitat Elevation Platform update 2.2.8 is now available: Please note, the process takes about a minute to download (depending on your Internet connection) and extract the hub update, and 1-2 minutes to perform the update after you click 'Update Hub'. We recommend that you periodically download a backup of your setup from the Settings page, Backup and Restore. See Warning below about rolling back from 2.2.8 to 2.2.7. Changes from 2.2.7: Drivers and Devices New drivers: Neo Z-Wave Repeater …

Let's start with Z-Wave Details page screen shots and see what we can determine from that..

Bet you have ghost nodes. The details that @bcopeland asked for would be useful. 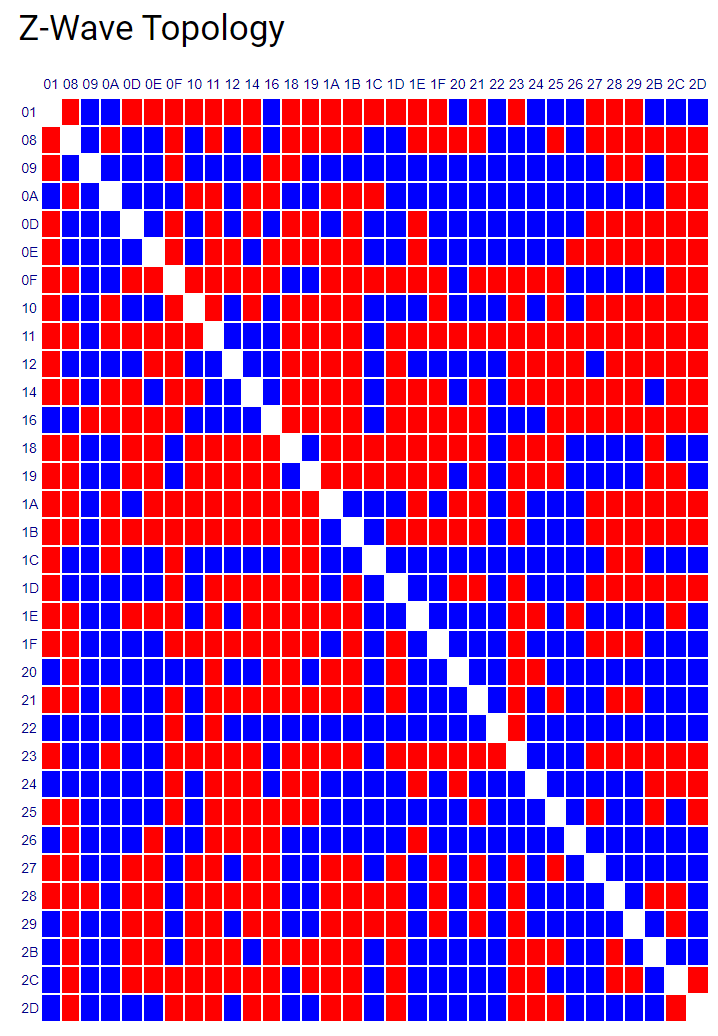 First thing I see.. Many devices are going through quite a few hops.. Where is the hub placed?

Take a look at just one row of your Topology and you can get a clue about what we're focusing on in our advice....

That Row shows, in Blue, the devices that can "hear" the Hub. The hub is Node ID 1 and a lot of red (unable to directly connect to the hub) is showing. Compare that to Node 22:

Whatever device that is.. it's got great coverage!!

If the hub was near "Office Hallway Light" you'd expect to see a lot more Direct connections.

ZWave is a Mesh Topology, so multiple hops are allowed but they indicate a need too. There's no hop unless there's a need.. an obstruction, interference, etc.

In other words, you are reporting low communication symptoms and your mesh indicates communications is sketchy. Your hub is physically located where not much of the radio energy of your devices is getting to the hub AND looking down that first column, it's identical, meaning the devices themselves report that they do not "hear" the Hub.

Only you know your home and the obstructions near the Hub... (metal ductwork in the wall directly adjacent to the hub? Refrigerator on the other side of the wall?)

Hub is currently in the office. Office, garage and hallway switches are closest physically.

The hub was more centrally located in the living room. But, since there is a wireless access point there, I moved the hub to the office to eliminate it as a source of interference. It resulted in no change.

But, since there is a wireless access point there, I moved the hub to the office to eliminate it as a source of interference.

I'm aware of different radio frequencies. That's why I placed the hub there in the first place.

I'm on the brink of tossing the hub out the window, so I hope you understand we're at the grasping at straws stage. Cheers.

I moved the hub to the office

When did you move the hub? And was your mesh fully built out when you did this?

Hub was moved a couple weeks ago. Some devices were added since. The switch in the office was one as well as some battery powered sensors.

I'm on the brink of tossing the hub out the window,

I don't understand comments like this... yes, I understand frustration, sympathize even... but what's that comment intended to do?? No one here cares that YOU specifically, of all the people on the planet, are using Hubitat or not. We DO LOVE helping out, but is that comment supposed to be encouraging? Are we not working hard enough to help and a little whip cracking is needed to get us to do our best?

Why did you leave out the 2nd half of my quote? The part that provides context...

I'm not demanding support of anyone and don't think I've said anything to give that impression.

For those attempting to help, thank you for your time.

Moving the hub can be pretty traumatic on an established mesh.. First thing I would do though is to move the hub back where it is more central.. Then I would run a full repair, you will likely see a ton of failures and it will take a few attempts to start stabilizing.. But after that we can re-assess and see what needs to be done next..

The hub was performing poorly in its original location. So, I feel no reason to move it back. Thanks for your time, but I'm going to think about my options some more.

I did not know that’s what the colors meant, thanks for that piece of info. I wonder if it would help others to put a legend on the topology page to mention direct vs indirect connections. Either way I learned something new.

They can’t help you if you don’t help them by doing what they suggest. Once it is in the previous place and you have done a repair, they will probably want more information.

The hub was performing poorly in its original location.

Maybe neither place is a good spot? The office is in one end of the house (not optimal) and the living room had something (ductwork, appliances, mirrors, old baby monitor or cordless 900Mhz phone?) interfering. Hard to say, we aren't there to see things.

But generally speaking central is better.

Bryan who has been helping you is a Zwave expert, he has done extensive work on the Hubitat firmware. So I tend to follow what he says to try.

You mentioned things worked fine with a SmartThings hub. Where was that? It would stand to reason that if your Hubitat is in the same location as the smartthings hub but one works and the other does not, the location isn’t the issue.

One thing I always recommend, though, are repeaters - either the Ring product or Aeotech seem to be favorites (I use the latter, personally).

I and others are well aware that z-wave devices on AC power are supposed to repeat, making repeaters unnecessary IN THEORY. Personally, I have found this to not be the case, for z-wave systems that employed radios from at least two different manufacturers. I think Smarthings did have a good z-wave radio, btw, but I found it had other drawbacks. Overall, my Hubitat C7s have been the best home automation devices I've used over more than 15 years of home (and small office) automation use. For the price of two small repeaters in a typical home, it might be worth it to try them.