This is the rule I have for triggering a siren when I close my garage door using the Zooz Garage Door App and a Zooz Zen17 and a Tuya Neo Zigbee Siren:

I am looking for some help with some improvements if possible.

I tried to do it when relay 1 of the zen17 changes but the delay was too long and the door closed before the siren triggered.

I would have recommended this same thing. I find it odd that there is a longer delay with the button press than with the closing event…

You can select more than one trigger on a rule. Just go-ahead and add the Opening event as a new one.

You could try a separate rule using a "physical switch" as the trigger. It only triggers the rule when the physical input is triggered, and not when triggered virtually (ie. Via a rule). The only action would be to sound the siren since the actual closing of the door would be managed by the existing rule. 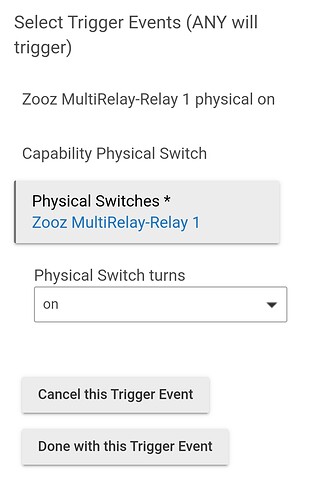 EDIT: I misread your original post. You don't want the siren to sound if the physical switch is pushed. This gets trickier, but maybe you could still use a second rule (triggered by the physical switch) to set a boolean variable to false, and check the value of the boolean before sounding the siren?

Here is my rule. It only activates when using the dashboard not when pushing the button or using remote.

If you use the Zen16 app it goes from opening to opened in the set time by the app, If you use the button or remote it it does the same but it doesn't get triggered until the contact sensor changes.

So if the rule triggers and the door has already changed states then you exit because it was triggered manually outside the app.

Looking at this reminded me that I had been meaning to get rid of the warning for opening. So I updated the rule. The exit if Siren is due to another rule I have that sounds when I close down the shop. It blares the siren for 20 seconds before the doors close to try and run out any birds that might have flew in. So if it is already running I don't need the individual door warnings. 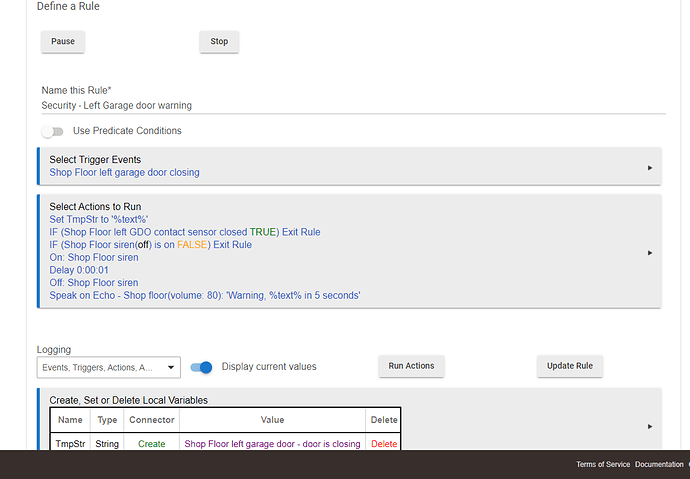 Thanks for the tips, I will try them out