The past few days, my zigbee network has been going offline constantly. Rebooting the hub generally brings it back online, but maybe 30-60 minutes later it's offline again. The majority of my home automation gear is zigbee based, and the network is usually bulletproof, so having it go completely offline like this is quite painful.
When I first noticed it offline, it was after I had plugged in an ikea tradfri hub temporarily to connect & update a few bulbs. I immediately thought the ikea hub must have trampled on the same zigbee channel and caused issues, so I unplugged the ikea hub and rebooted the hubitat. Unfortunately, since that first time the problem keeps happening.
I've read in a couple of other threads here that this can be caused by the hub being overloaded w/ high CPU or RAM utilization, but I don't know how to check that. Looking back at what I've changed recently, I updated a few apps using HPM, I've added a couple of Inovelli Blue dimmers, and added a nanoleaf shapes light. Most recently, I connected several new zigbee lights, but those were disconnected from power after pairing and stayed disconnected most of the weekend, while the zigbee network issues persisted, so I don't think those were causing the issue.
What can I do to identify the cause of this and get my network stabilized again?

I connected several new zigbee lights, but those were disconnected from power after pairing and stayed disconnected most of the weekend,

If these were repeaters disconnecting would be the worst thing that could have been done...

When I first noticed it offline, it was after I had plugged in an ikea tradfri hub temporarily to connect & update a few bulbs.

It might not have been the Ikea hub, but the updated bulbs, which I assume you've connected back to Hubitat, with the new firmware.

I've read in a couple of other threads here that this can be caused by the hub being overloaded w/ high CPU or RAM utilization, but I don't know how to check that.

When you say your zigbee network has been going offline constantly do you mean HE reports that your zigbee radio is offline? Or the network is offline but your radio is still functioning?

If your hub load is excessive you will usually see an alert in the little balloon icon.

Zigbee bulbs are notorious for causing issues on zigbee networks. Some of them try to repeat and do a poor job of it. And of course if someone turns off the power to them they do a REALLY poor job of it! I'm not familiar with the Ikea bulbs per se but many of us have separated our zigbee bulbs onto a separate network and hub to keep them off the same mesh as sensors.

It's possible, but unlikely. These were were brand new lights that I connected to power one at a time just long enough to pair, and then disconnected from power. They were also about 8 feet from the hubitat at the time. (They're hard wired recessed lights, and I wanted to pair them individually so I knew which was which, rather than powering them up all at once after they were installed and having to figure it out.)

Actually, no, I haven't paired the bulbs to anything since unplugging the tradfri hub.
These bulbs were previously connected to my Hue hub but weren't reachable by the hub anymore. The fixture they were in ended up still being controlled by a dumb switch for the most part, so the bulbs probably got reset at some point. I've finally replaced other fixtures on the same circuit and put in a smart switch, so now it's time to start using them as smart bulbs again.

I'm getting an alert from hubitat saying that the zigbee network is offline, and in the Zigbee details screen, it shows the network offline. 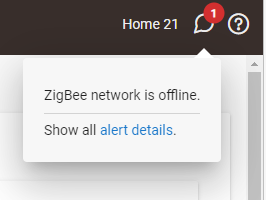 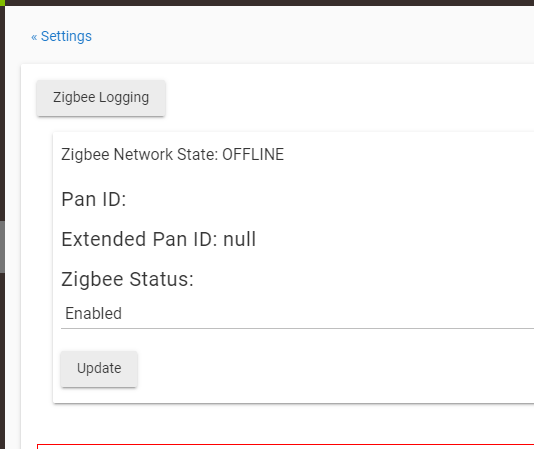 Most of my bulbs are on my hue hub, not the hubitat. I have a handful of sengled candelabra bulbs that are connected directly to hubitat, but I think that's it.
Well, plus the 8 downlights I installed this weekend. I'm near the 50 bulb limit for the hue hub, so I put these directly on the hubitat. They were not powered up most of the weekend though, and I'm reasonably certain the problem happened multiple times while they were disconnected. I guess I can cut power to them again for a few hours today and monitor the zigbee network just to 100% confirm that it happens while those are not on.
edit Pulled the air gap on the switch at 9:44am and rebooted the hubitat. Confirmed zigbee network online, channel 20, as of 9:48am.

Rebooting the hub generally brings it back online, but maybe 30-60 minutes later it's offline again.

Have you tried Shutting down the hub from Settings and unplugging it for 30 minutes? The absence of a Pan ID is usually indicative of a hardware issue. If your problem persists, you may need a replacement. If your hub is still under warranty, or have Hub Protect, you may want to visit support.hubitat.com to create a warranty case.

I haven't, I'll do that now. The Pan ID is listed when the network is online, but not once it goes offline.

Strange...I'm suddenly haveing the exact same problem this evening. The only difference is that nothing on my network has changed. I have not touched my hub today for anything, and all of a sudden this evening the Zigbee network says it is offline. I restarted the hub and the Zigbee network went offline again probably within a minute of it being back up. I have shutdown the hub and am letting it sit for a bit now. I'll let you know how that goes.

I went over 3 hours after powering the hub back up, without the network going offline. Then I powered up the new lights again, and zigbee went offline an hour or so later. I could have sworn it was happening while the lights were not hooked up this weekend, but perhaps not. I'll test a bit more, but may have found the culprit.

I’m having the same (or similar) issue. New home construction. I installed 74 Leviton Zigbee switches and dimmers. No other device, Zigbee or otherwise, on this hub. I managed to get them all paired (wasn’t fun but I got there). I’ve had the hub (from Amazon) for a couple of months but only started using it a week or so ago. I had only been interacting with the switches and dimmers via “devices” in the menu. I had trouble getting the dashboard to work….And noticed a notification that the Zigbee Network was offline and has, more or less, been staying that way (it will occasionally say it’s online) and my devices no longer respond to any commands from the hub. I tried downgrading the firmware and reloading new firmware. This did not help. I have also powered down for an hour and rebooted with no change. Devices do not respond to commands. I do have the Alexa Echo Skill added. I don’t know whether this addition had anything to do with the problem I’m having. I’m kind of at a loss.

They may be ZLL 1.2 bulbs. They are bad repeaters/messengers. That said, you might look into getting a zooz or innovelli switch for them as they have a smart bulb mode (keep constant power to the bulb but the switch still functions as normal) This would prevent you from removing repeating devices from the mesh. That said, if these are infact ZLL 1.2 bulbs and you want to keep them on Hubitat, switch out to Zigbee 3.0. This should solve the issue (still get the innovelli or zooz switch). Or you can pick up an additional hue bridge for 30 bucks if you wanna keep the existing bulbs (still get the smart switch)

Zigbee network says it is offline.

If anyone sees the Zigbee offline message, first, make sure your hub is running the latest release, and if the message persists, please send me a private message along with your hub's MAC address so we can further investigate.

So I let my hub sit for about 15 min last night and then plugged it back in. Everything has been fine since then. No idea what happened. I've been using this Hub for 3+ years and have never had that happen before.

They are zigbee 3.0 devices - the Juno Connect Smart Flat Wafer 6" downlight, and they're already connected to an Inovelli Blue series 2 in 1 dimmer switch. (Those have their own issues, but don't seem to be related to this problem.)
I may end up going the route of adding another hub, but I'd prefer not to if I can avoid it.

Nothing wrong with a second hub. Some of us have 2, 3 and 4 hubs to spread load, signal, etc and hub mesh works perfectly well.

I've left the new lights powered off since yesterday, and the Zigbee network has remained stable, so they definitely seem to be related. I sent you a DM with my hub MAC in case you can see anything helpful from that.

The downside to these being hardwired lights & all connected from a single switch is that it makes it difficult to troubleshoot them individually. If it turns out that I've got one bad unit, that's going to mean individually disconnecting them all from power and connecting them back up one at a time for a couple of hours each to test. . .

Hey Guys, I see these lights are both bluetooth & Zigbee. @bobbyD is it possible being in the same 2.4 Ghzspectrum that the bluetooth could interfere with the Zigbee ?
Also there are 2 specific lots of Inovelli blues that have been identified as causing routing & signal issues. What's the beginning MAC address of your blues? (don't post your MAC address here, just validate)
Addresses impacted are as follows:

My inovelli blues are in the affected range, but I have a couple of others installed and I've not had any issues with them so far. As I understand it, the defect causes a weak signal strength, so they could have routing issues or drop off the network, but I don't think that would cause the hubitat to shut down it's zigbee completely.

The more I think about it, the more I am leaning towards one of the lights being bad. I've just got to get time to isolate them and test each one individually to see whether it causes this. Good thing it's a 4 day weekend coming up. . .