One foggy night a shot rang out, the maid screamed, Z-Wave puked.
I installed 2 iBlinds a few weeks ago. Last night they both decided to go AWOL at midnight.
Still in the Z-Wave Mesh but incommunicado. and one was reporting PENDING with a line though it.
I managed to get both excluded but could not add them back; then the Ensuite light decided to disobey me.
As the blinds were now excluded I had to force delete them from the device list as they didn't remove themselves.
I shut down the hub and counted to 20, minutes that is, restarted and the Ensuite was ok; I could include the blinds and get them back working but...
I am now stuck with 2, what appears to be, working ghosts.
I have no way to get rid of these so maybe the protocol will expunge in due course?

What Hub model? That screenshot is from an app, not the built in ZWave details. If you go to the zwave details there should be a refresh button, click on that and wait for the page to reload, you should get a remove button eventually (make take a couple of refreshes). May need to power the devices down for the refresh to "fail" and give you the remove options.

If none of that works you would need a secondary controller (USB stick) to forcefully remove them via PC Controller.

All is ok now. I finally got a DISCOVER message and got through to the REMOVE.
It was just doing zip for so long.

There are firmware updates for the iblinds that solve a lot of issues including z-wave drop offs. Make sure your z-wave firmware on the hub itself is up to date before updating the iblinds. I know you got this particular issue fixed but I'd post your z-wave details screen in its entirety so we can spot any other z-wave issues you may be having

Indeed. Before I go chasing the firmware in some secret spot do you have a link or just the iBlinds support link. I only see V3 updates and I have v2

@Eric_iblinds Can you provide a link?

They can be found here:

Updating using the built-in HE Device Firmware Updater app can be sketchy/unreliable. But worth a try initially as it's the easiest.

Most reliable and faster is doing the FW update via secondary controller in PC Controller w/UZB stick. You should be able to use the product ID to tell if you have 3.0 or 3.1 HW. 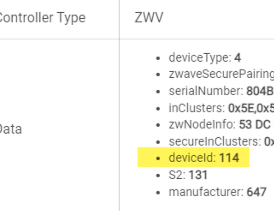 You can also see the current FW target when you are updating via HE app or PC Controller, they will show you the current version. HE Device FW Updater app example below indicates a 3.0 HW version, as current FW is 3.07. 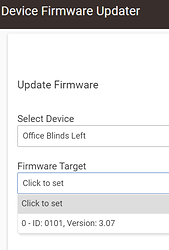 Ah so the firmware is the same for the older V2? V3 now the 700 chip so this is all backward compatible?
Just worried about bricking these. I ordered them over 2 years ago and finally got them installed.

wait till @Eric_iblinds replies... he can guide you for the v2 updates properly

Ok. I email iBlinds as well for a possible V2 upgrade.
Cheers

Ah, apologies, missed that you were asking about v2 blinds. Sorry for the misdirection. I haven't heard of updating the v2 blinds, but if it's possible, Eric will know.

Eric's at CEDIA in Dallas right now so it will likely be several days or more before we hear back from him.

@dnickel sorry our V2 version does not support Over The Air (OTA) updates.

Ok thanks. I did a support query so at least I won't be sad twice with that answer

Hopefully just a one off.