I have logs from my Aquara sensors after "warm breath". Can you do analysys please ? "Roof" is working ok, but "bathroom" logs only temp and pressure.

Little update. After reconnecting procedure OR restarting HUB there are 2-4 humidity transmissions and stops responding again. This means hardware supposed be ok.

i looked for drivers code i dint find for Xiaomi Mijia human body sensor, or is it same driver for both?

Hi
My Xiaomi/Aqara Temp/humidity sensors are draining a lot of battery. The are new and I bougth them last saturday, the lost 15-23% in a few days.
My HE is also new and I am new... so a newbie question, should this happen?

The are new and I bougth them last saturday, the lost 15-23% in a few days.
My HE is also new and I am new... so a newbie question, should this happen?

Please see my full answer in the other thread you started on this:

The drivers I support for Xiaomi / Aqara devices do not affect battery usage. Also, the drivers do not offer a way refresh the device to get the current battery level, because all Xiaomi / Aqara devices except the Xiaomi smoke detector send a "check-in" message every 50-60 minutes which includes the battery voltage. When that battery voltage information is received, all the drivers do is calculate a percentage based on the voltage value. It's a very basic method and only gives a very approxima…

Thanks, sorry, for doubleposting, still trying to find my way here...

Again with the help of @SmartHomePrimer, I have been able to move forward with this driver, which should now be fully functional in every regard except the experimental Check-In Report feature. Most importantly, the check and set sensitivity level functions should work correctly, and I was able to make improvements that will in turn result in a greatly improved driver for the Xiaomi Smoke detector as well. 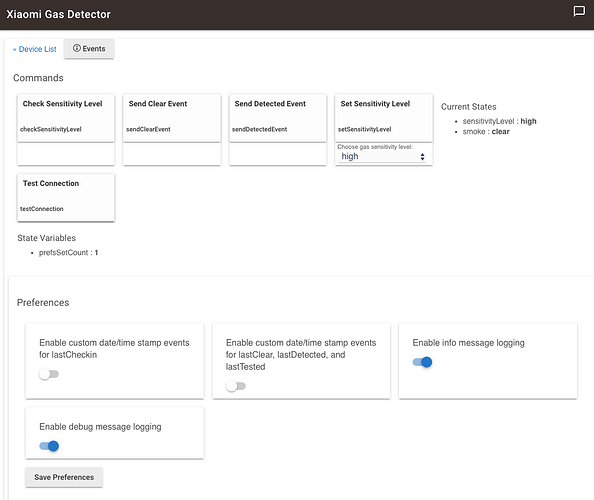 If any of these changes / fixes are not working as expected or if you have any questions / feedback, please let me know!

I am still looking for feedback on the experimental check-in report feature. Every time the gas detector sends its check-in message (around every 5 minutes), with info message logging turned on you'll see a report with:

Internal temperature is an unconfirmed value, and the units / range of the gas density value are unknown, so I would love to hear feedback on what range of values you're seeing in your logs. If any of these values turn out to be of use, I plan to add custom attributes so events are generated from the reports that can be then used in automations / notifications / etc.

To import the latest version of the driver, just click the [Import] button in the pop-up window and then [close], like this:

Otherwise, the newest beta device driver code can be grabbed from here.

My xiaomi motion sensors are on a zigbee network with many repeaters and a small house. Several of them keep dropping off. Re join is easy but I don't want to keep doing it. Can anyone recommend an alternative ?

Several of them keep dropping off. Re join is easy but I don't want to keep doing it. Can anyone recommend an alternative ?

Sorry to hear that! The usual reason for Xiaomi / Aqara devices dropping their connection is that they aren't compatible with one or more repeaters (as fully explained and covered in this thread) and the only sure-fire way to resolve this is to stop using the offending repeater(s).

If you've decided you don't want to deal with that, I can say that in addition to my Aqara motion sensors I picked up some Iris V1 motion sensors on eBay at a cost comparable to the Aqara ones. They are just a bit slower but work great otherwise.

What kind? Have you read this thread or at least the very first post (which summarizes users' findings) to verify that your repeaters are one of the (very few) known to be "compatible" with Xiaomi Zigbee devices?

Can anyone recommend an alternative ?

An alternative to what? As an alternative to Xiaomi devices, there are countless standard Zigbee (and Z-Wave and a few LAN) devices that play well with Hubitat. You can look at the official list of compatible devices, but most Zigbee (ZHA 1.2 or Zigbee 3.0) or Z-Wave (classic or Plus) devices of common device classes (motion sensors, contact sensors, smart plugs, etc.) will work with Hubitat out-of-box.

Or if you're looking to keep the Xiaomi devices but are looking for alternative way to use them, some people have created a dedicated Zigbee network just for their Xiaomi devices (and possibly known-good repeaters) to isolate them from problems caused by many standard repeaters. You'll need a second Hubitat hub plus an app like Hub Link/Link to Hub or HubConnect (I'd recommend the latter, though the former should also be sufficient for this limited purpose) to share devices between the hubs. (If you're feeling insanely adventerous, you could probably also use the Xiaomi Gateway with Home Assistant and integrate the devices with Hubitat via MQTT.)

If you mean something else, you'll have to be more specific. Good luck whichever option you take!

Thanks for the replies. Definitely an alternative to xiaomi. I have read the first post in detail but my repeaters are not on there. 3a nue dimmers (hubitat is working on supporting these officially soon) and swannone power out lets. So not sure they play well. They did on smart things though and rarely dropped with same setup .

I'm after a compatible zigbee motion sensor with illumination sensor but not one that will break the bank. As I have to replace about ten of them.

Iris V1 motion sensors could be a good way to go. How much slower do you find them to be ? One or two seconds I'm guessing.

some people have created a dedicated Zigbee network just for their Xiaomi devices (and possibly known-good repeaters) to isolate them from problems caused by many standard repeaters.

That's what I did and I don't regret it. It was cheaper for me to buy a new hubitat hub dedicated to the devices + a few Ikea repeaters than it was to replace the Xiaomi devices.

So not sure they play well. They did on smart things though and rarely dropped with same setup .

One thing you could try is to unplug any "bad" repeaters during pairing of the Xiaomi devices. This will force them to either connect directly to the hub or to go through a "good" repeater. That should at least keep them online for a little bit, and if you paired them near the ST hub (as many on that forum recommend), that could be why you didn't have problems there (the other being that the hubs' radios have different characteristics and it's possible ST's radio was stronger and more appealing even if you paired in-place). This isn't a guarantee: Zigbee devices will re-evaluate routes and change if they think one is better, but I haven't seen a Xiaomi device of my own ever do this (other say they have), so you might at least have a little luck that way.

But if you want to not worry about it at all, I'd definitely recommend replacing the devices. Iris v2 motion sensors might still be available in a lot of 10 for $55 on eBay if you're able to find them anymore, but unfortunately other devices (and even these when they they were new) tend to be a bit more expensive, one of the allures (besides their generally small size) of Xiaomi devices, I suppose.

Yeah well said. I'll have to either invest or get lucky with finding some Iris ones thanks

Or, if you have patience, you could wait to see what happens in the next month when the new Aqara devices (Zigbee 3.0 compliant?) come out. If they are as inexpensive as past models and are repeater agnostic, it could be a game-changer for a lot of folks.

I wasn't aware thanks! Will look them up!

The long anticipated Zigbee 3.0 Xiaomi Aqara lineup was announced today, despite a few of their updated hubs and products already shipping with Zigbee 3.0. I'm anxious to get my hands on the 4 and 6 button scene controllers I was given a sneak peak of in the Aqara Home app

I only have 1 but it's been connected for probably 6 months now and never dropped. I also have a couple of xbees but I think the leak sensor is connected directly to the hub, not through an xbee repeater.