Ah clear.
It’s been awhile since I used them.

Has anybody tried using one of these yet? 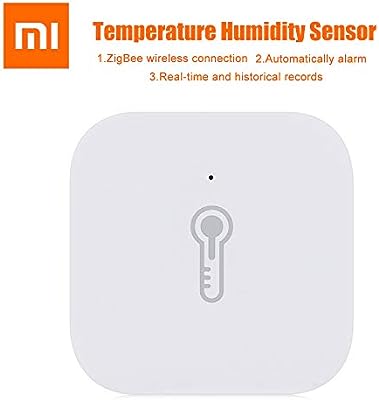 I've been looking around for pressure, humidity, and light sensors, and this has all three for a good price. I need it to do humidity at least once per minute, pressure once per 3 minutes, and light once per minute or so. I just keep hearing mixed things about aqara, with the single review on that page saying to remove zigbee repeater devices (doh)

Yes, lots of people have used those. There is a driver for them in this thread. There aren't a lot of sensors like this, so it's one of few Xiaomi devices I've kept despite getting rid of most of mine. I'm not sure if anyone here has ordered that exact one from Amazon (you can almost always find them cheaper elsewhere if you don't mind waiting for international shipping), but it looks like the same thing. The advice about repeaters in that Amazon review isn't 100% accurate; this thread, especially the summary in the first post, has what the community has discovered about these devices to date: Xiaomi & Aqara Devices - Pairing & Keeping them connected

not sure if anyone here has ordered that exact one

There's just two as far as I know. That Aqara model and the round one (might be Mijia branded). They're both Xiaomi, but my understanding it the square one shown is the one to get. That's the one I have and it works and stays connected better than any Xiaomi device I own, other than the Natural Gas Leak Detector.

I wouldn't buy from Amazon unless I was in an extreme rush to get it. Prices are almost aways higher than Gearbest, Banggood or Ebay sellers. Depending on where you live, Gearbest and Banggood both offer fast shipping. I buy from Gearbest and Banggood often, and I get 15 day shipping to Canada for just a few dollars. Pretty reliably 15 days or less. Aliexpress is another place to buy, but I prefer to use PayPal with Chinese sellers, not my credit card, so I avoid purchases from Aliexpress even though they are usually the cheapest place to get them. They are also the slowest to deliver in my experience.

Based on these requirements, you should not use an Xiaomi / Aqara sensors.

Both the Xiaomi & Aqara Temp-Humidity sensors only send reports when there is a change in temperature or humidity and the reports are not based on time intervals. This behavior cannot be adjusted or changed at all.

The Aqara motion sensor only sends a lux value report when motion is detected, never based on a repeating time interval. Again, this behavior cannot be adjusted or changed.

I have these sensors. They report only once an hour. They also report when there's a change. You definitely cannot configure them to report at defined intervals. Also, they don't do lux - only temperature, pressure & humidity.

Here's the event log from the one in my garage - as you can see, the event recording frequency is not what you need. 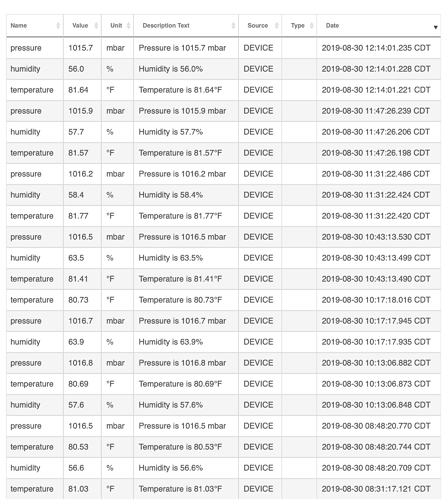 On the plus side, if you have Aqara compatible repeaters, like Tradfri plugs, the Aqara sensors don't drop off the zigbee network.

Actually reporting on a change will work just fine, so long as they can do it pretty reliably, and the change reporting interval isn't absurdly long. I'm intending to use these for two purposes: Bathroom and laundry room humidity control (extractor fan), and air filter replacement (hence pressure sensor.) Lux on motion works as well as a distant third intended use will be for automatic light control on movement detection (just don't want the lights to turn on when the room is already lit)

Anybody have any major issues with these and what I'm trying to accomplish?

I'm reserving that for my garage door and wired door sensors that came preinstalled as I don't like any of the off-the-shelf solutions I've found so far (none of them are cost effective, except for myq which I don't like for its required cloud connectivity.)

You make it sound like that is a bad thing. It is good thing, you can learn and play with something new!!!!

so long as they can do it pretty reliably

You will need to have a Xiaomi Aqara compatible zigbee mesh for these sensors to work reliably. I invested in several Tradfri plugs.

Well there are a few logistical problems to add to that:

Ikea is just down the street from me, so I think I'm going to pick a few up. Anyways, how about pressure changes?

Pressure changes are reported, but I don't know if a change in pressure triggers a report.

So far this is the best price I've seen without ordering from China: 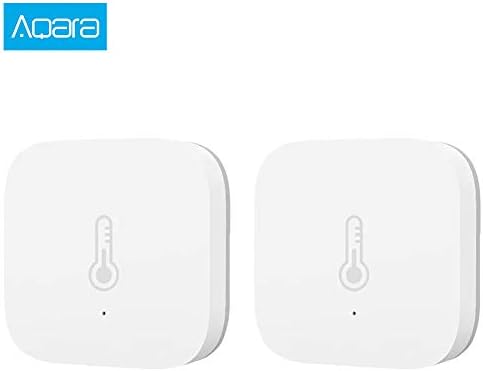 Main reason I like Amazon is it's so easy to return stuff that sucks, is broken, etc. I've had way too much difficulty when ordering stuff from China. For me to do that, it has to be so cheap that it's not even worth trying to return (and even then, sometimes it will piss me off anyways, like this time I ordered something for $5, it didn't work at all, and they only offered me a $5 off of $70 coupon instead of a refund. What assholes. Good thing my credit card allows chargebacks.)

While the important thing to understand about the Aqara Motion Sensor's lux reports is they only happen when motion is detected, it is equally important to know that the lux report message is received by the hub some milliseconds before the motion detected message.

This sometimes results in the motion detected event occuring before the lux value event (due to the timing of separate instances of the driver code running for each message received). So, it's possible that an automation triggered by motion detected will be making decisions based on the previous lux value (since the new lux value event may not have occurred quite yet.) So it's best to insert some kind of short delay before the automation / rule evaluates whether action should be taken / not taken based on the lux value.

Anyways, how about pressure changes?

First off, the Aqara Temp-Humidity Sensor is designed to report Atmospheric Pressure in an open-air environment. So it may or may not work well as a sensor for measuring air pressure of an HVAC system. I have read of one person using it that way, @brianspranger, but I can't seem to find his post on the ST forums about it at the moment.

Otherwise, as far as frequency of pressure (and temperature and humidity) reports goes, I'll repeat what I've stated in this post:

Here is the best documentation I have found, located in the GitHub repository of the parent company Lumi United Technology's:

Note: when they say "temperature changes over 0.5 degrees" they are talking about changes in degrees Celcius.

However, changes in pressure values alone do not result in a temp/humidity/pressure report being sent. The pressure value report just "rides along" for reports sent when either the temperature or humidity has changed past the above mentioned thresholds.

Amazon sided with the seller. First time that happened to me. I’m more cautious about private sellers on Amazon now.

Was that a prime order? In my experience, Amazon policy always takes precedence over the seller's rules if it's fulfilled by Amazon. This one is fulfilled by Amazon as well, so returns won't even cost anything if it's crap. Two day shipping on this as well (just ordered it an hour ago, guaranteed Monday delivery date.)

Not prime. I argued. Lost

Nah, no losing, it's actually good info and I've experienced the same on Amazon. Any purchase I'm uncertain about, I stick to prime for that reason.

Anyways what I've been reading so far tells me that indeed these are a poor choice for HVAC filters. Nonetheless, people seem to be using them for bathroom fans with decent results. I was thinking about going with Iris v3s on ebay, but meh, at this price I'd only be saving a dollar each tops, I think I'd rather have the safety net amazon provides over saving four dollars, and I already bought 10 iris v2's at $5 a pop, so I already have their supposedly very good motion sensing capabilities (haven't deployed them yet.) And who knows, maybe I'll find a use for atmospheric pressure later on?

Anyways, anybody have any suggestions for what I might do for an HVAC filter replacement sensor that won't break the bank? I've already got my ecobee telling me when 300 hours have passed, but between my cheap costco air purifiers and xiaomi knockoff roomba, I've got the dust and dander situation so well under control that I think 300 hours may be too often, and at the same time, Phoenix dust storms are too unpredictable, so I'm looking for a more accurate way of determining this. So far, measuring pressure seems to be the best way, but I haven't yet found an ideal solution that would also allow me to integrate with hubitat.