What are your best automations / ideas?

So true, you do become accustomed to walking into a room without turning a light switch on...

Complexity doesn't always lead to credibility, stuff just working and being useful is all anyone ever wants....

Yep, of all the stuff I've done, my family really only cares about the motion lights. My daughter told me the other day that it's becoming weird going to friends houses where that doesn't happen.

Farko makes Zwave skylights, but this is what ended up working for me…

Hi All Has anyone had any success with the Fakro Z-Wave Roof Windows. I am just having some installed in my extension and am looking at including them into the SmartThings Z-Wave network. I’m guessing I may need to some code to support them unless...

Casement windows are also possible to automate as well, This is how i did it on smartthings…

This has been a project I’ve been piecing together for years, and bought the next round of parts last week. Motor: https://www.truth.com/products/Hinged-Window-Hardware/Skylights/Sentry-II-WLS-Motor-System Zwave: I’m not 100% sure this will...

To clarify, is there a way to make this rule in Hubitat or is this a rule in Alexa?

Ah yes, we setup a shortcut in Alexa “Alexa, I’m up” that turns on a virtual switch in Hubitat. This switch, when on will stop the rule. We have it turn back off automatically at a later time in the day to ensure we will get the wake-up message the next day.

Sort of. I'm aware of how to make a virtual switch in Hubitat and import it in Alexa. I created conditional rules that would allow me to control devices in Alexa through Hubitat using these virtual switches. So I guess you must have put this virtual switch in control of lights or other wake-up devices, and then created a condition in Alexa to turn off the switch until you give that specific command?

My favorite is the rule that checks the temp and humidity outside. If they fall within preset parameters the house will tell me the weather is perfect for opening the windows and turning on the attic fan.
If I decide to open the house I just start opening windows. When the windows are opened it turns off both thermostats and turns on the attic fan.
When the temp off the humidity moves outside of my parameters it will turn off the attic fan. It also tells me which windows are open.
When I close the last window it turns the thermostats back on.

What kind of sensors do you use to check temperature and humidity outside?

Also, is there a device that opens regular windows?

I'm looking for devices that will open/close vertical blinds and curtains. So far there is a device that opens and closes horizontal blinds, but that won't meet my needs.

That's very interesting!
Do you mind sharing how you do that?

I can't speak for @aaiyar, but i know the Roku Connect app tracks the state (playing, paused, stopped) of certain Roku TV and streaming devices. I haven't used it in any automation yet, but I believe others have.

I present for your use, my new Roku TV App and Driver for Hubitat. Download from GitHub, or install it through the Hubitat Package Manager application and be kept updated on my changes as they are published. This uses a parent, and child device. The parent device Roku TV is the main device driver that controls the Roku media players, and Roku powered TVs directly as a TV capable device. The child device is a hubitat/Generic Component Switch for launching Roku apps, and tracking state of wh…

My favorites are all HVAC related....

I use the Bond integration to control my RF ceiling fans. I couple that with my Inovelli Red Series dimmers.

The fan is wired always on, and light is wired to dimmer load terminal so dimmer controls only the light.

The dimmers control the lights in all my rooms. Plus I use the scene capability to control my ceiling fans, and the color changing LED to report status.

In my office and master bedrooms, the dimmers do not control the load — the fan lighting power is always on,

The dimmers in mode of operation are set to disable local control.

In master bedroom, I have a Hue Motion Sensor positioned so bed movement and dog walking around won’t trigger motion.

What this does is it allows me to have a nightlight while sleeping based on motion.
A motion light that I can see well with before bed, when it is dim outside.
And if I turn on the dimmer, then the the light goes to 100% white and all motion lighting control is disabled until the dimmer is turned off. Using my hue integration devices, I can set the default scene so that turning on the light always activates the scene as part of the in command, so this works well.

This does not require a group lighting device, since Alexa tries to carry out commands on all lights in the room.

I also have a rule in my guest bathroom that prevents fogging of the mirrors.

Using dew point calculations, I compute dew point based on outside air temp, hallway temps, and bathroom temperature and humidity. If humidity and temp in bathroom near dewpoint then I turn on the fans and turn it off automatically when the dewpoint drops back out of range of current bathroom temp and humidity.

I have considered making this into an app, but for now it is one rule in rule manager.

What kind of sensors do you use to check temperature and humidity outside?

I use an Inovelli 4-in-1 sensor which I plug in so it never runs out of battery.

There are weather drivers provided by community members that will provide the same information for your region.

I'm looking for devices that will open/close vertical blinds and curtains. So far there is a device that opens and closes horizontal blinds, but that won't meet my needs.

There are some devices that do this with the chain, or curtains by being connected to the curtain rod. You can search the forum to find ones that are compatible. Doing a quick search in AliExpress brought me to this amongst others:

Retrofit and Motorize Your Existing Curtains in 30 Seconds, No replacement&No Tools needed. Wireless App Control, Timer Control, and Voice Control. Compatible with any types of curtains(Rod, U, and I.) Smart home and home automation product. Add...

That's very interesting!
Do you mind sharing how you do that?

As @dylan.c said, it can be done with the Roku Connect app. I started using it a week ago, and it’s been great. The downside is that the Roku devices don’t push the current state, so the app has to poll for it periodically (default is every 5 minutes, I believe). So for my automations, whenever I need to check the state, I refresh the device, wait 2 seconds, and then check the value of transportStatus. Took some tweaking to get right, but it’s been working perfectly so far.

Wow, that was helpful! It never occurred to me to look on AliExpress. I guess because I only just now started to use it. I guess this is a marketplace for mostly Chinese manufacturers? I haven't had great luck with buying Chinese stuff from Amazon, but I couldn't find anything on Amazon for horizontal blinds. This being Zigbee, it should work with Hubitat, should it not?

Do you have a link to the Inovelli 4-in-1? I was not able to find it on Amazon.

Have you tried the Inovelli site? It is not always on Amazon…

Fully equip your smart home to monitor, control temperature, light, motion, and humidity with our Z-Wave 4 in 1 Sensor. Update automations to your desire.

Thanks. @Sebastien is this the one you were referring to? It doesn't look like it has a plug-in option nor does it specifically mention outdoor compatibility. Bear in mind I live in Texas where it gets hot and humid...

Can’t speak to the weather proofing but: 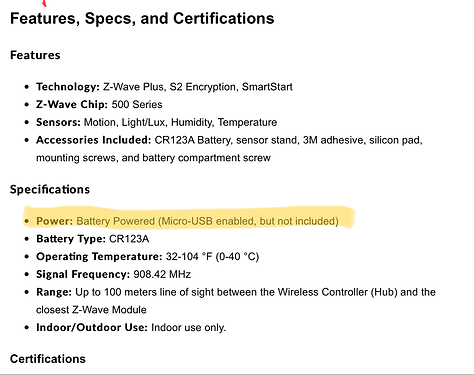