That is under the "Device" Tile Type. if you are using a Hub Variable like I was showing, you need to change that setting, I believe...

Try it. You'll see. I can't explain it any more detail, sorry. You're just referring to the left side of the screenshot, which has no bearing on choosing Template after-the-fact.
Indeed, the screenshot you posted does illustrate how you initially choose the device/variable desired for a new TIle, but I'm talking about selecting a different Template.
Try it?

Hmmm. ... I expect the idea is not to use the Device templates, given it is a variable.... Under the variable tile type you just choose the variable and the rest (I assume) is inferred from the variable definition. I am expecting your setup of the tile is not the intended use case, albeit available for you to select.

You're just referring to the left side of the screenshot, which has no bearing on choosing Template after-the-fact.

"Tile Type" is what we're talking about, not "Pick a Device," and it does have an effect. If you choose "Variable," you do not need to (and should not even see the option to) pick a template. The tile will be correct based on the variable type. If you are seeing other behavior, that is incorrect, but I don't see anything from the screenshots that suggests it is.

I expect the idea is not to use the Device templates, given it is a variable.

Yes, this is the recommended method to use variables on Dashboard today. It was once not possible, and connectors were part of the solution to that by "elevating" them to devices, which Dashboard and other apps can see. This is no longer necessary.

From your screenshots, it appears you made a variable connector and are trying to select that as a device tile. That can work (again, it was once the only way), but it seems like that setup is not quite right, either. You'd need a "Variable" type connector for that--any other type of connector (boolean/switch, etc.) will not work. The device needs the setVariable() command that Dashboard will run. You can use a boolean connector on Dashboard too, but it is a switch device, and the correct template in that case is Switch or anything that lets you do on/off.

To be fair, when I chose to edit the variable tile, this is the dialog that is displayed, with no representation of the variable selected... Not sure if anything along these lines has been corrected in Beta, even though I probably could find our myself... 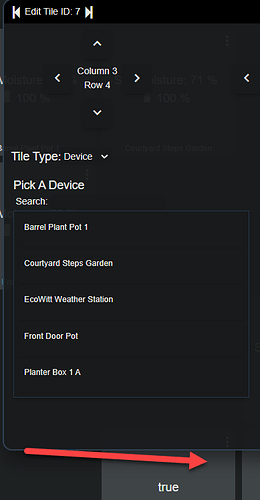 That I see, too, even on production firmware. It seems to always default to a "Device" tile when you're editing, even if it was a "Variable" tile (so you'll need to make sure that Tile Type: Variable, along with your hub variable below, are re-selected before you click to change/save anything--or you can just close the editor with no effect). Definitely an oddity there, or perhaps part of Dashboard's...charm.

The above does still describe what you'll need to do for when setting it up, however (and apparently any time you want to edit, though there's no reason to unless you are trying to choose a different variable, and in that case I guess you'd need to do most of that anway; move/resize actions seem OK).

I don't mean to sound stubborn or unappreciative, because this entire thread amounts in most people's minds to a tiny nitpick at most, but I stand by my assertions that dashboard is automatically assigning the wrong template type. By this, I don't mean the programmer's intent isn't being honored (somebody obviously modified the string variable template to accommodate booleans in this manner)...

... But I do mean that it leaves the user without the ability to design a proper dashboard, that is, one which can have different icons or colors assigned to the various expected states of the device or variable in question.

I'm basically asking that Boolean variables behave in the same manner as switches, right down to their behavior at the CSS level.

In that very limited regard, I don't think anybody can or will assert that I am wrong here. I absolutely should not have to invoke an overlay tile, a rule, a variable connector to act as a switch, and a separate switch tile all to make something appear 'on' or 'off' based on true or false.

How do you create the tile?

The same way as you.

I will certainly accept that explanation, which covers the majority of the topics brought up here, but I'd still like to ask what all these "Variable NNNN" templates are intended for, especially if, as I've now been led to understand, they only apply to devices? 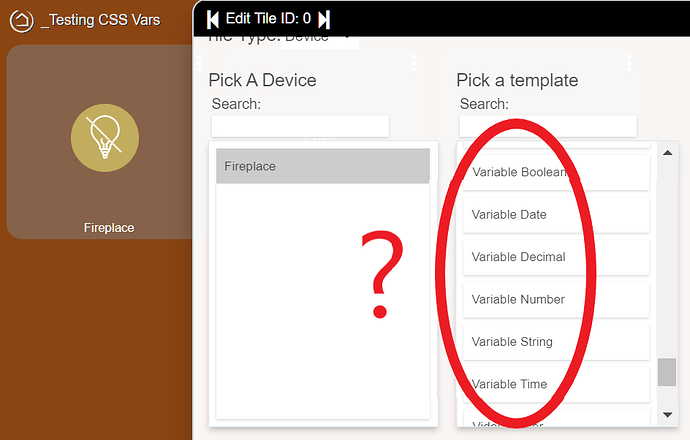 And is my initial report of the Variable Boolean template's odd behavior -- i.e. getting stuck on "SENDING..." -- completely without merit? I was a brand-new Hubitat user when I first encountered it, and I will one day have to explain this to another n00b, which is why I'm asking.

Then you are not selecting a template, those are only defined in the platform for devices, variables are treated differently. And updating them back at the variable works as intended

I stand by my assertions that dashboard is automatically assigning the wrong template type.

Variable tiles do not use templates. If you are seeing a template option, you're either running into the oddity (only when editing) that we noted a couple posts above, or you are not using a variable tile (also described above) but rather a device tile.

Variable tiles do not need templates because, unlike a device (which can have multiple capabilities and there is no way to know what one you might want on the tile), a variable has only one type, and Dashboard will know what to do.

I absolutely should not have to invoke an overlay tile, a rule, a variable connector to act as a switch, and a separate switch tile all to make something appear 'on' or 'off' based on true or false.

I see two separate issues here. One is how a Boolean variable tile should display. Right now, it is a checkbox and dropdown. It could look like a switch instead or provide some option to do that; it's just not how it works right now.

The other is the assertion that you need to do all of the above to get what you want. You don't. You only need to create a connector for the variable and choose "Boolean" for the connector type. Then add the connector to the Dashboard using any appropriate template, e.g., "Switch." You do not need to add the variable itself to Dashboard (or even authorize it for Dashboard), overlay tiles, etc. This is a pretty simple solution and used to be the only way variables could be used on Dashboard at all (or used with any app outside of Rule Machine, where the precursor to hub variables originated)--native/direct access is relatively new.

What he said..... If you are wanting to format the tile differently, that may be a different conversation.... Or, as @bertabcd1234 points out, may be a configuration option... e.g. a connector and switch template you style differently.

This may be a point to reset and understand a bit better exactly what you are wanting to have appear on the dashboard and when you want to alter the variable.

I stand by my assertions that dashboard is automatically assigning the wrong template type.

Nonsense. It assigns a variable 'template' for a variable. 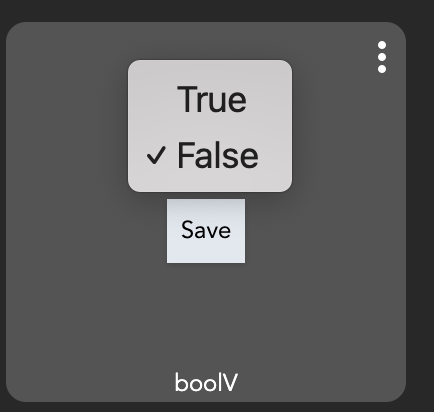 This entire thread is mis-information stemming from mis-use of variables in a Dashboard. It's unfortunate that so much effort has been expended on something that is just wrong from the get go. There are clear differences in the platform between devices and Hub Variables, and this difference extends to all of the apps that use variables, including Dashboard. You can't use a variable in a device context, and vice versa.