I didn't see anything posted about the initializing process never finishing. I have also tried and replace the battery and had the button with in 2 feet from the hub during the setup, but no luck. 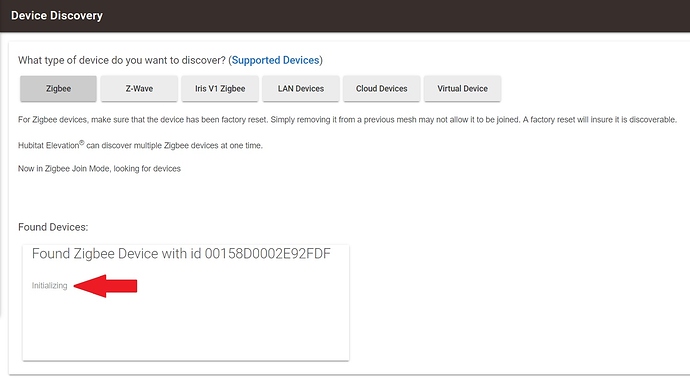 Xiaomi devices are not fully Zigbee compliant, so they can sometimes be a challenge to get paired. The battery devices are excellent on battery power, and they do this by sleeping very quickly (including during the pairing process where HE is expecting them to stay awake). Once it shows initializing, try tapping the pair button every few seconds to keep it awake. You may need to try a few times to get it to work.

Remove the battery for 20 seconds, replace it and try pairing again. Eventually you'll get it to pair. I've never had a single Xiaomi device that wouldn't eventually pair.

Thanks, that did the trick! 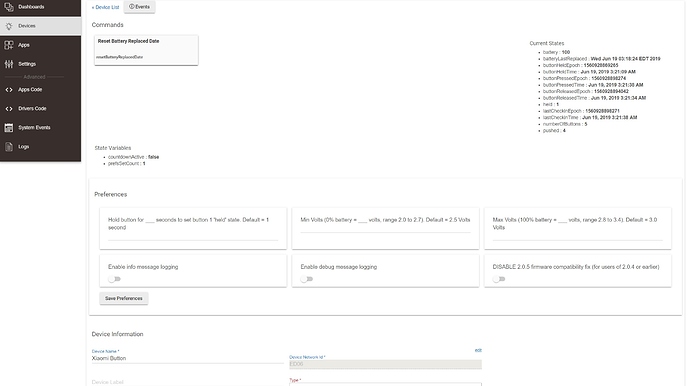 I was having high hopes with this Xiaomi Button, with having 5 different button commands with either a push or a hold. But just after a short time, the button become unresponsive to any taps or being held down. I removed it twice and added it back, and for a short time it works just fine. It's after it sits for a while it becomes unresponsive.
I believe like SmartHomePrimer mentioned above, that the Xiaomi button goes into a deep sleep (too deep).
Oh well, you win some you lose some. 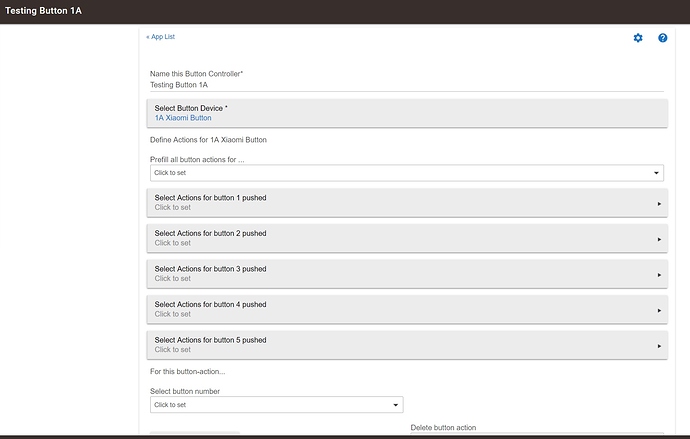 Don't give up yet unless you're aware of another quirk of the Xiaomi devices: they tend to leave your network and not automatically rejoin unless they choose a compatible parent device during the joining process. There is another thread which discusses this compatibility issue.

Xiaomi devices - are they pairing / staying connected for you?

I have 3 of these buttons. Before I had repeaters, one of them would always drop. After adding two IKEA Trådfri outlets to my home to repeat the Zigbee signal for them, NONE of my Xiaomi devices drop, EVER. I'm still anticipating it happening, but it just doesn't. They are solid with those repeaters in place.

But just after a short time, the button become unresponsive to and taps or being held down. I removed it twice and added it back, and for a short time it works just fine. It's after it sits for a while it becomes unresponsive.

That original Xiaomi Button should be immediately responsive at any time you happen to use it. What you describe are symptoms of either a weak ZigBee network connection (if the button has been moved quite a distance from the hub), or the presence of ZigBee repeater devices that Xiaomi / Aqara devices aren't compatible with.

Most AC-powered ZigBee devices are repeaters, with the main exception being some kinds of ZigBee smart bulbs (such as those from Sengled). I also highly recommend at least having a look at my opening post of the thread @Tony mentioned, for a list of ZigBee repeater devices reported as working / not working with Xiaomi / Aqara devices.

So, are you using any AC-powered ZigBee devices?

Thanks everyone for the information.
We just added a couple new Zigbee switches a few days ago, one in our basement and the other on the first floor (were the HE hub is) to help build up my Zigbee network. The Xiaomi button is located on the 2nd floor, I will move it closer to one of the Zigbee switches to see if that helps.

As for Zigbee AC-Powered devices, besides the 49 Philips Hue bulbs I believe is just the HE hub and the two switches I added, one GE dimmer outlet on the 2nd floor, plus one Sylvania Garden spot I have outside. Here is a list of all my Zigbee devices. (*)

Thanks again, and I'll let you know what happens. 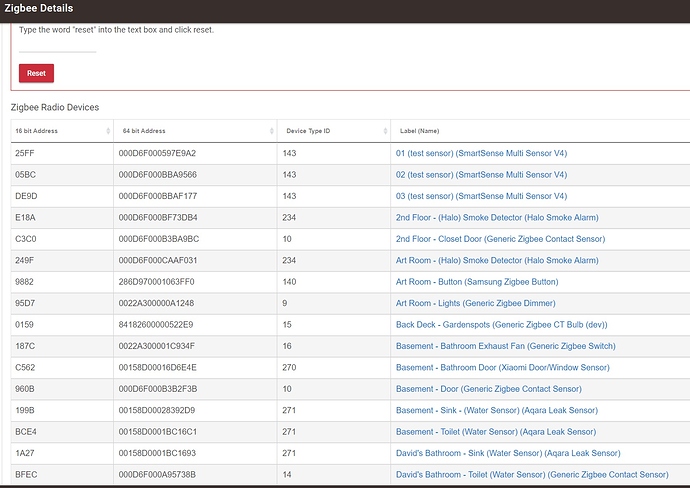 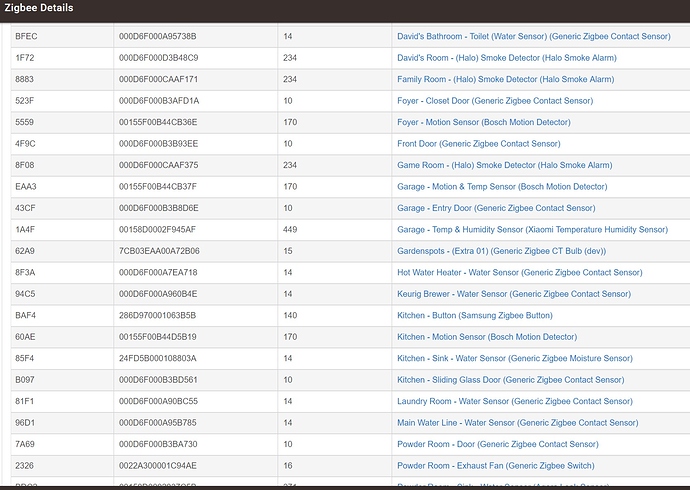 That is quite a list. I wonder if you are reaching the limit of 32 end devices being connected directly to the controller.

I never knew there was a limit!
Is a 2nd HE hub required then?

No a second hub is not required. That limit is for end devices connected directly. If you were to get those end devices routing through repeating devices, it would give you more room.

Great, thanks!
I guess I will plan a trip sooner to Ikea and get a few of their outlets.

Sorry, still new to HE....
But since I just added the two Zigbee switches and outlet a few days ago, Do I need to do anything to the HE hub in order to Refresh the other battery-powered Zibgee devices so they see the new switces and outlet that has been add to the Zigbee network?
Because I know with Z-Wave you need to run a "Z-Wave Repair" when adding new devices to the network.

A word of caution- Xiaomi devices can take a while to report in after this, so be patient. If you find devices have not reported in a couple of hours, you might have to manually rejoin them.

Thanks for that info!
I'll do this before I go to bed tonight.

It seems you know this, but just to be sure, Xiaomi devices don’t follow the exact Zigbee protocol, so they are compatible with very few repeaters. IKEA TRÅDFRI Outlets and their dedicated repeaters are compatible and very low cost. Most other Zigbee repeaters have been found to not repeat their signals at all when viewing a network map with an Xbee (which is a very strong and compatible repeater for Xiaomi, but significantly more expensive).

Wanted to give an update to everyone who helped me with my issue with my Xiaomi Smart Button.

After purchasing 6 of the IKEA TRÅDFRI Outlets (only used 5) and set them up in the basement, main floor, and 2nd floor as Zigbee repeater. Then after adding them to my HE hub, and powering down the hub to do a Zigbee healing process.
For the last 3 days the Xiaomi Smart Button has responded a 100% every time I used it!

Thanks again, everyone for your help!

I have been struggling with the 'original' xiaomi body sensors the whole Christmas holiday. I found this topic but did not help me. Finally I found the solution today on a site not connected to Hubitat. The key is that these devices very quickly switch off. In order to connect them you have to give a short click until it pairs. The same is true for the initializing process. In order to succeed you have a short click is necessary until it has successfully finished the initialization process.

Finally I found the solution today on a site not connected to Hubitat. The key is that these devices very quickly switch off. In order to connect them you have to give a short click until it pairs.

I explain this quite clearly in the opening post of the thread for my Xiaomi / Aqara device drivers for Hubitat. See under Basic pairing instructions:

In either case, keep the device "awake" by short -pressing the reset button repeatedly (about every 2-3 seconds, following the same push and LED response sequence described in steps 2-3 above), until the device is recognized by Hubitat.