Using a keypad to issue commands

Is it possible to use codes as "switches" or "buttons"? For example, could you use "1" to turn on outlet 1, "2" for outlet 2, and so on? (presumably, pressing the number and then "enter" to submit that code to Hubitat?

I found that in Rule Machine, I can set a rule to toggle a switch when a specified alarm code is used. However, entering that code and hitting the submit button on the Ring keypad (v1) did nothing. So, I tried arming/disaming HSM using that code, and, well, it occasionally worked. I attempted toggling the alarm on and off about 20 times, and of those attempts, I believe the switch was toggled three times. I could try troubleshooting why it was so inconsistent, but I don't want to toggle HSM in this process anyway. I want to use function codes independent of HSM.

If there is a specific code attribute (if the pad displays proper codes on the device page) Then you could potentially use that code to trip a rule. I guess the question is does it have to be a valid code stored in the keypad to be seen as an attribute or if there is a last series pushed attribute...(I don't know this, just speculating as I don't own one) More knowledgeable people are more likely to give better answer)

I don't see an option for adding a code attribute, just the code itself. The code seems to be uploaded to the keypad as soon as it is created, and treated just like every other code.

I haven't tried to hook my Ring keypad to the HE I have the Ring hub doing its thing and the HE does all the lights and everything else. On the Ring if you press like 1 and nothing else on the app it will say invalid pin entered from x keypad at whatever time. So it is sending something to the Ring hub when you press buttons on it even if you don't press enter.

What it is sending... No clue but I have found it sends something.

What it is sending... No clue but I have found it sends something.

Oh, that is interesting. Hubitat's log doesn't record any entries for codes which are not deliberately submitted, nor does it seem to log incorrect codes. But that information must be available...if only I could write custom drivers.

Yeah on the Ring device itself it will show if you push some buttons but not all of them make it complain. If you try to arm or hit something and enter I guess is what makes it say rejected. I pushed the 3 buttons on the top and it does it, same if you type then hit enter. 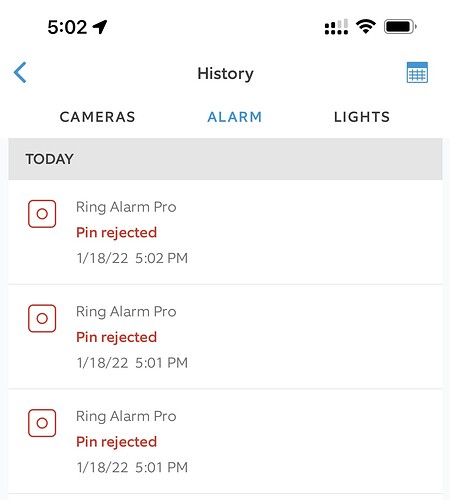 Ok, thank you for the confirmation. So when connected to the Ring Hub, it does definitely send something. So the question is now, does the keypad send such a signal directly to Hubitat, and if so, how can it be captured and utilized.

I didn't realize this was a strange idea...it seemed intuitive, and I figured other people must have done it before. Perhaps I was wrong...

Is it possible to use codes as "switches" or "buttons"? For example, could you use "1" to turn on outlet 1, "2" for outlet 2, and so on? (presumably, pressing the number and then "enter" to submit that code to Hubitat?

Oh wow, that looks exactly like what I'm looking for...unfortunately I'm using v1 keypads. Is there any chance that this driver is partially compatible with these v1 keypads?

Edit: I'm not a dev, but I am fairly tech savvy. I'm happy to help with R&D efforts too, if bcopeland or others wanted to try working on that.

Is there any chance that this driver is partially compatible with these v1 keypads?

Only if someone had a v1 keypad and wanted to add it in. I don't have one so, there would be no way to know if things worked or not.

Ring has a zwave technical manual on their site: https://support.ring.com/hc/en-us/articles/360040141092-Ring-Alarm-Keypad-1st-gen-Z-Wave-Technical-Manual

From a brief review and comparison to the gene keypad, many of the configuration params are different... Events and control might be similar enough? Probably a bit of trial and error involved

Events and control might be similar enough? Probably a bit of trial and error involved

Okay, well I tried just installing the app, companion app, and driver. I set it to use one of my Gen 1 keypads, added an "alt code" (unlike any other saved code) and directed it to flip a couple switches. When I tested that, it did nothing. I tried a couple variations of that, but still nothing. Most annoyingly, the Habitat log didn't report anything related to this test at all.