It's been almost five hours but it just ticked up to 92%, so, it's still going! I noticed the Z-Wave repeater plugged in under the blinds blinking it's green light occasionally.

The good news is that I did a long push on the Dangerous Button and all four blinds closed so at least the failed update didn't hurt anything!

I still have S2 security on for that blind. I have a vague recollection of that being a problem with OTA updates. I guess I should exclude, reset, and re-discover and try again.

Everything is working perfectly, though.

I powered down the Hubitat and moved it near the iBlinds and unplugged the nearby repeater before I plugged it back in.

As a complete novice I would advise doing the OTA firmware update only Z-Waveing directly to the Hubitat no matter how wonderful your Z-Wave mesh might seem.

Glad you got it sorted out...painful, but removing S2 on the blind will make things easier overall. FWIW, I have done the same, added all my blinds w/out S2.

I also had a hard time updating from 3.01 to 3.06. The C-7 firmware update app failed because the iBlinds unit reported it wasn't update-able. The firmware update driver failed for some odd reason after the entire firmware update had been successfully transmitted to the device. PC Controller was also the only thing that worked for me, and I still needed it directly paired as a primary controller and not a secondary on Hubitat (though in retrospect that's probably because I was using security and paired the stick without because I'm used to doing that when I want to use it as a secondary to pair problematic S0 devices without security for sure...). In any case, I got it done.

I paired mine back with S2 like I had before when I was done. I'm not sure where the blanket recommendation against S2 is coming from. With S2, you'll get Z-Wave Supervision that might help make sure commands actually get sent (at least with my driver, but I imagine Hubitat's does something similar), which if my previous experience with iBlinds is any indication can only be a good thing.

Agree that a "blanket" recommendation may be a bit strong, but using S2 has been a bit of a pita for me when re-joining devices ("Where the ### did I put that code for that blind!!") which I did w/the blinds a few times when I was starting up w/them. Also the longer OTA update times (and more potential for failure?) due to smaller packets being sent w/S2 was an issue I wanted to avoid.

It does seem like the fixes/updates to Z-Wave Supervision v1 and v2 in recent FW versions of the hub FW might make S2 more desireable for the command reliability. Frankly, I really wasn't aware of Z-Wave Supervision before the thread that Bryan started on how to write Z-Wave drivers for S2 - maybe because I have never written a driver.

Luckily my blinds have been very reliable overall so I'm not (at least yet) concerned about not having supervision.

All my blinds opened as scheduled this morning!

Curiously, my Z-Wave firmware updater app disappeared. I did a repair. Un-installed. Re-installed. Reset. It's gone.

I'm going to take that as an omen.

LOL...I had that happen as well. Didn't spend a lot of time trying to figure it out, as one of my processes when it first released was to manually remove it and re-install it, so I was used to it going away.

Grrr, I ran down my battery and now the blind is not responding! Hopefully it's not that much trouble to get it back in the network.

I have been using this app with Hubitat and it works great!

It would be useful if it reported battery. I think I have the stock HE driver installed.

Been using the driver from @bertabcd1234 and it works great - I recommend you try that one.

If you are having problems with your blinds (and don't believe they are driver-related), please post about that in another thread. I would like to keep this thread focused on discussion related to the driver. Device/driver history note: This driver/post was originally written for v2 of the iBlinds unit. This driver still appears below. I have also written a new driver for v3, also below. Check your model (v3 was released in fall 2020). Hubitat now also has a built-in driver for v3 only that ma…

As soon as I get it back to responsive state, I'll give that one a try.

All my blinds (four) just opened up exactly as intended.

iBlinds are one of my favorite home automations!

Your blinds automations are some of my favorites as well.

I'm sad though...wife has decided (she is "The Decider!") no blinds in new addition...she's using curtains (both sheer and light blocking) instead.

And I was all set to automate blinds on all the windows.

So now I have to switch gears and see what I can do for curtains instead. It'll be hours and hours of additional research and planning, followed by a lengthy and very bureaucratic WAF approval process. Kind of like building a new supersonic jet w/the government, only a little more complicated.

LOL yeah, it's dremel and grease for me. Just for fun, look how close it is. 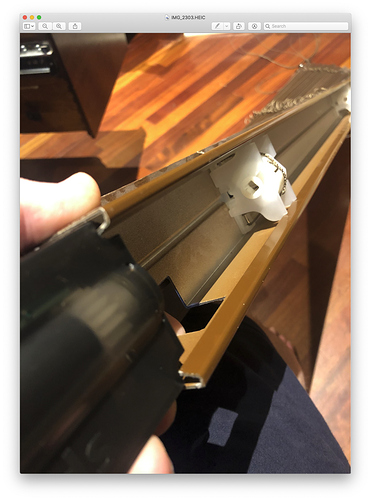 I didn't by iBlinds because according to their website my blinds are not compatible:

"The manual tilt mechanism cut out should be on the botton surface of the headrail only, not in the corner of the readrail."

But that is exactly what your picture looks like.
Any ideas why they recommend against it and what impact it had on your setup?

It all depends on your comfort/skill level. I got the iBlinds anyway even though my rod was dead center and with a corner cutout. You can see how it came out on post 340. A little bit of drilling and cutting but you can make it work and still look decent.