What does toggle dimmer do in Rule Machine? I'm taking an educated guess that it will temporarily set the dimmer level to the toggle level. Then once the dimmer goes off and comes back on again, it resets back to what it is set to in the device settings.

Which command are you talking about...this one:

it resets back to what it is set to in the device settings.

No....that would be a normal Switch toggle, which you can also do for dimmers. This command overrides the previous level and uses the level you specify in Rule Machine. If you want to toggle the dimmer to the last value that the dimmer was set to, use a normal switch toggle.

@Ryan780, I was asking about the second action. Thank you for the clarification. I am having issues with my Hank zwave bulbs when I set the levels (they lock system until they finish 'thinking' about what they are suppose to do). I was trying other actions to set the levels of the bulbs that will not lock the system until the actions on the Hank bulbs complete.

they lock system until they finish

What do you mean? You can't do anything else at all with hubitat? Or just with that bulb? I would expect the second. And that's normal. When you modify a z-wave device, the attributes in Hubitat do not update until the device sends back confirmation that it is done. That will be sped up by having a strong mesh.

When I try to set the level of the Hank bulbs, all the other Rules/Actions do not process until the Rule Actions for the bulbs complete. Example: The rule for bulbs triggers and it initiates. I can run around the house and dance a jig in front of multiple other motion sensors and they don't trigger any other Rules until the bulb Rule completes it actions. I have narrowed it down to when I try to set the bulb level. I can wait a good 30 seconds or more. For my zwave mesh, I'm sure it's as good as I can get it. I don't have any outlying zwave devices.

That is not the way it is supposed to work. 30 seconds? What driver are you using for your Hank bulbs?

The driver that Hubitat provides.

What do you have your secure z-wave setting set to? All or Locks/Garage Doors?

Locks/Garage Doors are enabled, not everything. Here is a look at the device data. 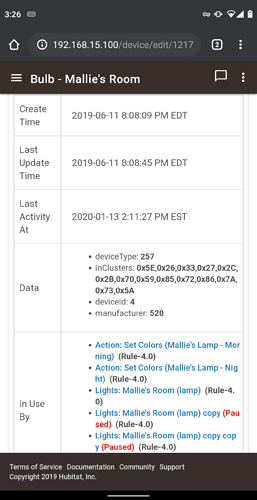 I will probably try to turn on the bulb, put in a 10 second delay, then set the level ... for testing. My end goal for my daughter's lamp bulb (motion triggered Rule):

I have a zwave bulb connected to a zwave outlet. I was turning on/off the outlet and setting the bulb color/level. The performance is much better if I leave the outlet on and dim the bulb from 0 to 5/15/30. I have not tried to introduce color changes yet.

My guess is that there is a delay for the bulb when it is getting power back before the settings can be changed. If I just control the on/off at the bulb level, it may always have a sliver of power from the outlet.

I have a zwave bulb connected to a zwave outlet.

This is not the correct configuration. Smart Bulbs are supposed to be powers 24/7. Removing power from them will have negative affects on your mesh network as well as meaning that the bulb will have to reconnect to the hub when you apply power to it. You do not need a separate power socket for smartbulbs.