Here's my feedback rollup after transitioning from SmartThings/Webcore over the last 10 days or so. I'm feeling pretty positive about Hubitat which is always a good way to start a new relationship. My hub is up and running and all my devices are integrated and I have a nice presentation of information (via the dashboards).

Let's get the less positive stuff out of the way first, The process of transitioning wasn't totally painless but not all of these issues are on Hubitat. . I had problems pairing some devices with the hub sometimes taking 4-5 attempts and, worse yet, I ended up with over a half dozen ghosts. I was able to remove all but one via Zwave Details but that one required me to purchase a PC hub (I got a Zooz S2 700) and run the SiLabs Studio to remove it. I also had some issues with rule manager 5.1 instability which, honestly, might be due to me hitting the back button. In one case, I thought the Mimo2+ wasn't responding to a switch tile but it turned out to be the rule manager (back button?) issue that made me think it wasn't working. Let me say that I posted numerous times about the issues I was having and always received a timely response. Most of the time, that help enabled me to get past the problem. Only once, did I fail to resolve an issue, that was with my wife's phones geofence not showing in the app (did I find a bug?).

I was really impressed with the breadth of device support. The first thing I did once I ordered the hub was to start looking at what devices I needed to find drivers for. I needed a number of third-party drivers under SmartThings and figured I would as well with Hubitat. But it turned out that I didn't need any extra drivers. Of the devices I was most concerned with, a Remotec ZTS-500 thermostat, a Mimo2+ Signal/Relay device, and my Aeotec ZW095 Home Energy Meter Gen5, only the HEM needed an add-on driver to expose all it's attributes (the Hubitat driver worked but didn't expose all the information available from the HEM).

Coming from SmartThings and Webcore, I also had to be impressed with the Dashboard tools which really do a nice job of presenting the information you want/need. That's only tempered by the bit of learning curve with the CSS stuff and a lack of centralized information about what attributes are presented in the templates. I spent a lot of time looking for stuff like the dimmer tile components (i.e. .dimmer, .dimLevel). It would be really great to up the documentation on those things so we can do more creating and less searching.

My system is up and running really well now and I'm thinking of expanding. I mostly worked out the presence sensing (in view of the lack of geofence in the Hubitat app for my wife's LG V20) but that's about the only thing I'd like to have working better.

I have to give Hubitat a thumbs up.

Edit: I was able to use Rule Manager 5.1 to recreate my Away At Night Light Randomizer which was one of my main reasons for using Webcore. I feel I don't need Webcore any longer with Hubitats capabilities.

Glad you're having a positive experience. Always good to hear. I usually try to recommend this thread to people because it tends to help with the new user gotchas...

Glad you're having a positive experience.

Your help and assistance helped me through some of the rough spots and contributed to my satisfaction so thanks! That thread would have probably helped me with a few things that I found out on my own now.

A lot of us ST refugees have had very similar experiences, and ended up feeling much like you do after our transition to HE. The breadth and depth of the capabilities of HE allows a lot of flexibility in how you automate your home. That plus knowing you can always come here to get quick and accurate information and help make it a fun and interesting platform to work with.

That thread would have probably helped me with a few things that I found out on my own now.

Well hopefully there is other stuff in there that will help

A lot of us ST refugees have had very similar experiences

The transition away from Groovy taking place now and breaking the effort I had put into Webcore as a result was the final straw that got me to switch. Just too much uncertainty if my devices would work under the new system. To be fair, most devices would and, just before I left, they had released a new driver for the thermostat that was working well with the Remotec ZTS-500 but with the disadvantage that it couldn't be seen by Webcore any longer. There's also a dashboard but it's meh. Yeah, since I was looking at a lot of effort with the transition, it was time to explore the possibilities. A discounted price and free shipping had me purchasing the Hubitat hub before I knew what happened.

Away At Night Light Randomizer

It does and was one of the reasons I was looking at Hubitat in the first place.

I'll take a look but, for the moment, I'll keep wringing the best I can out of the Hubitat Dashboard.

Sure thing. It's a work in progress and still testing but I think it's working as expected. About that, the way I expect it to work is to randomly select a light within a random time between 10 - 20 minutes and then randomly turn it on or off. and to keep doing that between the set time (sunset to 3 AM) while the mode is AWAY. It should end when the mode changes or the ending time is reached. At the end it should restore the lights to their previous condition. I hope it works like I think. 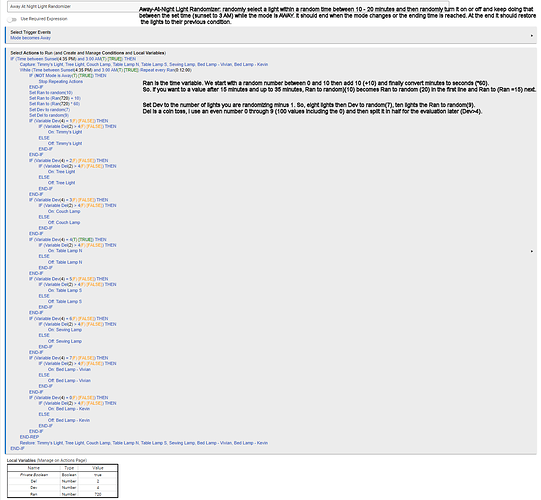 You didn't mention if you're an Android or iOS household, but if you are Android, or just got a couple Amazon Fire tablets on Black Friday sale, the community Android dashboard is beyond amazing...

the community Android dashboard is beyond amazing...

I am on Android with a Samsung S21+ and an LG V20. Here's some of my current dashboards for phone and tablet/pc:

I'm still a bit of a newbie with dashboards so it's pretty basic so far. I like a bit of white space

. I'm working on enlarging the grid for more fine detail among other things. It's a challenge with the phone view because my wife's phones screen differs from mine (smaller).

On a different note, I've been looking at adding a background image. Shouldn't there be an option to tile an image especially on the dashboard background image? It would save space from large image files. Okay, so I did figure out how to do it with CSS but still:

No, not to you directly. I was thinking out loud really.

Absolutely. I'd like to run lean and mean so I'm trying to do the most with the tools at hand. Like tiling the background image means I can use a tiny image file and get a nice background look.

This topic was automatically closed 30 days after the last reply. New replies are no longer allowed.