Just discovered that some of my switches and dimmers aren't registering their on/off status on their device pages when I turn them on or off at the switch.

One is a Honeywell Z-Wave+ switch I just installed. The other is a Ge Z-Wave switch installed a few years ago. Other switches in the same box (similar Honeywell Z-Wave+ and GE) report normally. Both GE switches (reporting and not reporting) are using the Generic Z-Wave Switch driver, and the Honeywell's are both using the GE Enbighten driver.

I changed the GE switch that was using the generic switch driver to the GE Enbrighten driver, saved and hit config, and it still did not report on/off on its driver page.

I've only checked four switches (hot day over 100 degres so I'm lazy), but am assuming others in my home may also be having this issue.

Anyone seen this before and figured it out? @bcopeland - this something you've heard about?

Are they old enough that they are possibly subject to the problem mentioned in this thread (and many older ones; this is just one I found the most easily):

GE Z-Wave Dimmer not sending status to HE Devices

Hi Guys - I when the Office Light (a GE Z-Wave "non-plus" Dimmer) is physically turned on nothing there is no log of this occurring. So HE doesn't know when its been turned on or off at the wall. If you poll the dimmer HE is able to pickup the proper state of the dimmer. Everything else seems to work fine with this dimmer. Using the standard Generic Z-Wave Dimmer device type. Do you think there's an issue with the dimmer? Thanks, Glenn

To summarize, many "classic" switches don't send everything back to the hub when physically controlled due to patent issues. A refresh or polling may help, but I wouldn't recommend that if you don't need to. If digital controls also fail to report this, that is a different problem.

Thanks very much for the info.

I was thinking at first it might be a switch age issue, but the Honeywell that isn't reporting status is a new Z-Wave+ switch that I bought/installed just weeks ago as I was moving over to HE. The odd thing is that one of each type of switch (one new Honeywell Z-Wave+ and one old GE Z-Wave) is affected, and one of each type also reports fine.

I'm going to go look at that thread, thanks for pointing it out, for some reason didn't hit it in my searching before I posted.

If they were not using the "Smart" driver, they probably don't have the previously patented feature (Jasco didn't pay for the patent rights) needed to send manual switch actions to the hub. That requires enabling polling.

Look at the "inClusters" information on the Device page. If that starts off with 0x5E, it should support sending the notifications back.

And, yes, I'm having consistent issues with a few of my new switches as well. Not all--just a few. They are missing the "Lifeline Association" configuration for some unknown reason. @bcopeland is looking into it.

I think you nailed it, and I mis-reported previously. The inClusters info on the device page...looks like the reporting is not supported on that switch. Victory is yours.

Changing to the "Smart" generic switch driver did not affect reporting, as expected.

Also, I f'd up my notes, and it's the two GE switches that aren't reporting, and the two new Honeywell are reporting. Looks like mystery solved!

@rob9 - Don't even know what that is - what does that leave you without if it's missing? On GE switches, or general issue?

Oh, and meant to ask, I assume no benefit to changing to the Generic Z-Wave Smart Switch/Dimmer driver? As I noted above, it doesn't help w/the reporting issue, but wondering if there are any potential benefits using this instead of the "non-smart" version.

The main issue w/this is that using a Dashboard to report status for these switches is pretty pointless. I may replace a few of these switches, but man, one is in a switch box that is so tight that I honestly fear going back into it... [eek!]

Changing to the "wrong" driver isn't likely to help--and is likely to create other issues, since it expects things that aren't there.

Although not the best for overall performance, if you need to have the current status of those old devices, you have a couple options:

#1 will poll like crazy, so it's not an ideal thing--but I it works if you need to poll everything frequently.

#2 lets you control how often you do the polling--but isn't quite as automated. This lets you greatly reduce the traffic on your network if you don't need the constant polling generated by #1 (at the expense of having the status being delayed).

#2 lets you control how often you do the polling--but isn't quite as automated. This lets you greatly reduce the traffic on your network if you don't need the constant polling generated by #1 (at the expense of having the status being delayed).

Thanks...I might look into this, but have a general dislike for polling so I'll likely live with it for now.

Man, another thing that no matter how I explain to my family will be "Something that your father could not get to work."

It gives you an excuse to buy cool new switches!!

If you want something really impressive, some like the Inovelli ones let you program the color of the LED and even make it flash, pulse, etc.

I have a couple of those on order now.

I will probably weaken and do the upgrades at some point, but think I need a little break after all the stuff w/the new C7 hub.

Plus I'm sure my wife would like a break from the endless packages arriving over the past few weeks (switches, new mini-UPS, Ecowitt weather stuff, POE splitters, wireless wi-fi bridge, many Picos, etc., etc.).

Thanks for the help!

I was just trying to map all my Amazon purchases to my credit card bill. OMG

My wife busted me shuffling past her with two smartthings motion sensors last night. Her: "What are those" Me: "Pay no attention to the man behind the curtain" Her: "Bullshit... what'd you buy now?" Me: "Some motion sensors so the closet light doesn't turn off on you when you are around the corner and so the bathroom lights stay on while you're taking a bath." Her: "Then why didn't you just say that in the first place." 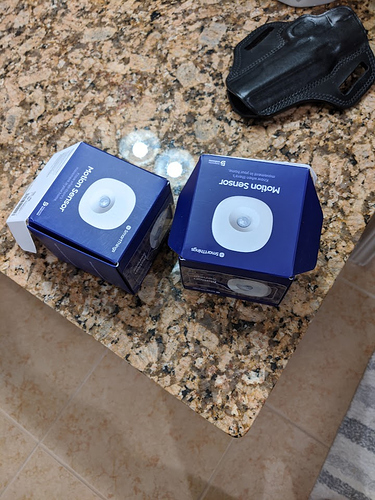 And it's always hard to resist another motion sensor or two.

Here's a Node-RED way of doing it.. in case you are interested..

Title: Device poller A better way to poll those pre-Z-wave Plus switches. It only polls the device when motion is active in the room. (No one can manually press a switch if they're not in the room.) [image]

My parents, my grandparents, all the way back to my ancestral protoplasm are all in agreement that polling is the work of the devil, and (even worse) corrupt programmers.

I am glad to see the info, to help w/my Node Red apprentenship.

Ahh soo true but of course

"He who sups [plays] with the devil [non-Zwave+ devices] should have a long spoon [poll]"...

I'm late to the party, but what was the solution for these? I'm not have luck with RM or Z-Wave Poller app either...

There is no elegant solution, it's a HW/FW issue, the older Z-Wave devices don't report as nicely as newer versions. @erktrek posted a Node Red approach above...

Here's a Node-RED way of doing it.. in case you are interested..

my solution was to rip all out and replace with newer zwave plus and an occasional zigbee one in certain locations to make sure i have good coverage.