In case @ericm or anyone else finds this helpful, here are the schematics for the Sonoff iFan02

I figured out how to add full fan and light (on/off) support for iFan02 in Homebridge. No firmware flash required. Will create a full step by step. Not ideal for everyone, but it is at least possible to control it via HomeKit automation by using virtual switches to trigger and HomeKit Scenes.

I got mine a few weeks ago and just had some time to play around with it. It is similar to the 4CH so getting it to work with my firmware is actually pretty simple. I have it mostly done and will post it soon for testing.

As for flashing it, I read that an external power source is needed, but that wasn't necessary for me. The 3.3v from the FTDI adapter worked. I just connected 3.3v, RX, TX, GND (J3) to the FTDI adapter and grounded TP16 (on the bottom of the board) while plugging in the USB. First flash and it started broadcasting the AP.

So far I am able to turn on/off the light and adjust the fan speed 0,1,2,3. The included remote still works to control it as well.

Great news. Now I'll have to learn how to do this. Although the method I posted works, local control is far preferable. Is there a Hubitat driver that works with this right now, or will that work still need to be done?

What others have found, and I confirmed myself, is our North American fans don't run well with these and their 2.5 microfarad capacitors. Found a post showing, and received recommendations to convert with a dual 4/4.5 microfarad or higher (depending on the fan) capacitor in place of the stock motor run capacitors. Without this change, the medium fan speed it really slow and the slow speed barely turned the blades.

I'm going to try to find a smaller dual capacitor then the one he in the post used. My fan canopy just barely fits the controller housing as it is, so I don't want to have to have and extra bulk. Another thought is to simple run wires out with the capacitor external to the module housing.

I believe @ogiewon may know a thing or two about ESP8266's.

Dang, that sucks about the hardware. I've already done the driver and smartapp support and linked it on my Sonoff page in the forum.

I've been working on porting my Sonoff Connect over to Hubitat in my spare time. I have the discovery app working, firmware updated, and the driver for the Sonoff Basic done. The drivers are taking a little extra work as I've had to use some alternate LAN communication methods to get Basic Authentication working. That is for those that want to password protect their Sonoff devices. There is a wealth of knowledge on the SmartThings forums. Probably a little too much knowledge and I haven't had t…

So did the hardware chipset change? I am about to purchase 2-3 of them.

Not that I know of, @SmartHomePrimer was just mentioning how the internals don't work well with US fans. See the post that mine is replying to.

Order away. Just know that you're going to need to do a little sourcing and soldering

The 2.5 microfarad motor run capacitors that are used in the Sonof iFan02 need to be replaced or the medium and low speeds will be way too slow. Different fans have different run capacitors in them, so if you want to be precise, then you'll need to pull your fan apart to see what sizes are used in it. Otherwise, you'll probably be fine with a similar 4.5 and 4 microfarad capacitor shown in this post.

In the photo below, one of the 2.5 microfarad capacitors is for the slow speed, and the other is combined with the first for the medium speed. You just have to unsolder them and then solder in the wires from a dual North American fan motor capacitor, or if you have enough room in the fan canopy, you can use two separate capacitors and route their wires from the board to the outside of the controller housing. 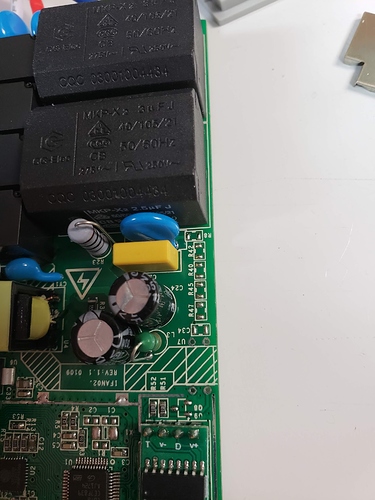 Here's two 4 microfarad capacitors for $2.30 and free shipping. Order them at the same time at the iFan02 and have them race from China to your house

[Edit] I'm in no rush to make this work. Already have a manual fan control on the wall and Autumn is right around the corner, so I'm going to follow my own lead and order just two 4uF capacitors to see how it goes.

Thanks for the info! So my question for you surrounding the microfarad capacitors. Do I just purchase the link above and then solder both into a single Son/off or do I just need (1)?

I think they have to both be the same or close to the same value, but not sure. Checking with my father (a retired engineer) for confirmation. Sent him the schematic. Will update when I'm sure.

So you can replace just the top capacitor with a 4 uF capacitor. The higher the capacitance, the faster the speed will be. The original 2.5 uF capacitor on the bottom will connect in parallel with the top capacitor you change to 4 uF, giving a total of 6.5 uF when the module is set to medium. This should be a good combination, since most of the fan run capacitors I found online were between 3 to 6 uF.

My father also suggested, since these are probably not well made PCB's, to use de-soldering braid to remove the solder from the pins, and make sure your iron is hot. Don't spend too much time on any pin or you will delaminate the circuit from the board. Using a strong desoldering tool on cheap PCB's will almost certainly delaminate the circuit.

Okay, so whose done this and how'd it work? That is without burning down the house, and if it did burn the house , did insurance cover it

Is the controller hard to fit in the canopy with the bigger caps soldered in place?
Thanks

I was looking into them awhile back and decided against using them as I've read that they require soldering 5uF capacitors (and thus removing the 3uF ones) in order to get the fan speeds working properly in the US. I'm not scared of using a soldering iron or anything like that, but messing with a device that is going to be controlling a huge, spinning blade-o-death above my bed is kind of a no-no with my wife.

They're really cheaply made. I just wasn't confident this thing was safe or reliable. So the two of them I ordered were instead used as an update to my Halloween controller. Ran everything off Hubitat and Hue this last Halloween.

The Caséta fan controllers are in my crosshairs. Wonder how @destructure00 is making out with the bugs discovered in those?

Yeah, that's what I'm looking at as well. I haven't ordered my Lutron hub yet, but I'm thinking about getting it this week.

I started with a Caséta Smart Bridge Pro back on ST, and it's indirectly what led me here. The How-To post I wrote for the Pico on ST has brought in several HE converts, and it looks like another was born today.

I read your Pico how-to on ST. Back then, I didn't have the wife's approval to upgrade our switches though... Since then, she's gotten on board with the "infinite upgrade program".

The Caséta fan controllers are in my crosshairs. Wonder how @destructure00 is making out with the bugs discovered in those?

No progress here. Still waiting for the firmware update that was supposed to roll out 2.5 weeks ago.