Intriguing device ... I don't think HE has a generic Zigbee smoke detector driver, so that would be challenging.

I'm in the US and was able to score a bunch of Iris plugs (3210-L), it's a zigbee device but includes a Z-Wave repeater and so helps build both meshes. Depending on your situation, might be an approach to take.

FYI, there is now a z-wave plus version.
Not sure if it’s being sold anywhere yet.
https://products.z-wavealliance.org/products/3886

Nice! Certification date of 6/26/2020 so hopefully we'll see it available before long.

My Nest Protect (first gen) just started announcing heads up for smoke randomly (and I've ruled out dust and environmental triggers). Customer support told me to go pound sand. So I am looking to replace my smoke alarms as well. I'm leaning against Nest, given that experience and the abandonment of Works with Nest.

I prefer a wired alarm simply because I can, although I am questioning whether that makes sense. It was stated in the Smart Home Show (episode 188) that new smoke alarms with batteries must have batteries that do not require replacement in the 10 year life of the device. I don't actually think that is correct .. I think they are conflating battery backup in a wired device rather than batteries in a battery only device. If the only battery smoke alarms you can buy now require that the battery not need replacement during the useful life of the device, then what is the point of a wired device? I am asking myself that.

The ZCOMBO (and now even better, ZCOMBO-G) is on my short list, but there is no wired version of it. Then again, who cares?

This module has dry contacts to monitor your wired smoke detectors.

I believe first alert has one also.

I recently replaced the smoke detectors in my house. I wanted to get ones I could get status from, but none of them that I found (like the First Alert ZCOMBO) would also work with the interconnect. I definitely wanted less infrastructure between one detecting smoke and them all going off.

So I went with regular detectors (Kidde PI2010) that are hardwired A/C, battery backup, dual sensor and interconnected. $30 each. I already have new, separate CO detectors from when we replaced the furnace a few years ago.

To tie an alert into Hubitat, I picked up a Ecolink Z-Wave Plus Firefighter FF-ZWAVE5, which you mount next to the smoke detectors and a microphone picks up the alarm.

I would have gone with the Kidde SM120X relay, except I couldn't find another access point to the interconnect wire anywhere in my house outside of the attic. I would have had to tap into the wire in the attic and put it up there, and I didn't want to do that.

The SM120X is rather compact, I was able to fit it into the same junction box to which the Kidde KN-COPE-IC was mounted, ran the SPDT dry contact wires out to interconnect.

I am thinking about buying one of these two Zigbee sensors - z wave - wifi - Domótica Económica (at the bottom of the page), but I can't decide which one to get - Heiman or Xiaomi Honeywell.
Any thoughts on which one is better?

Regarding the Ecolink units...they are listeners that can connect to your Zwave network, and if they hear an alarm on your system, will provide a notification on HE that you can use to trigger automations, etc.?

...once triggered via audio alarm, recognizes the event and instantly sends you a text or email notification.

The review by "Tickerguy" describes the Z-Wave messages it sends, so yes, this interfaces with a Z-wave hub, which is what actually sends the notification.

This is what the device detail page looks like in Hubitat. You get temperature, battery, smoke, CO, tamper.

I've never "tested" the CO on my detectors, but I have tested the smoke many times, and get the alert in Hubitat every time. I would show the logs, but I haven't tested it since moving it to my new C-7 hub (so don't have a log of the test). 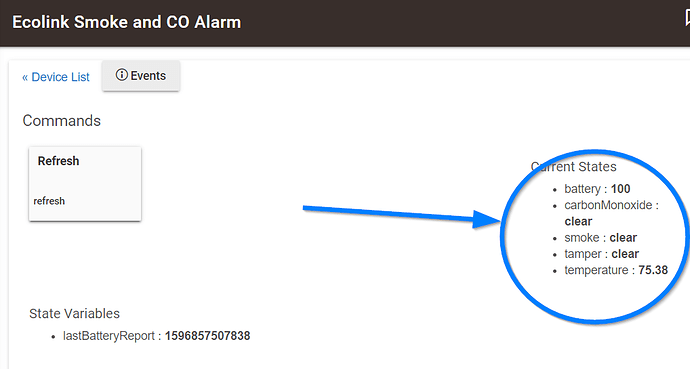 Thanks also @JasonJoel - so you have one too and like it?

I definitely recommend the ecolink firefighter as well. They’re particularly good if you have dumb, interconnected detectors. If one goes off, they’ll all go off, so only one firefighter device is needed.

I do, and do. It let me buy normal, standard, cheap smoke/co detectors and still get status alerts that I wanted.

And maybe most importantly - without being locked into Nest's BS ecosystem/walled garden. I had Nest Protects in my last house and hated them. Had 2 different detectors out of 7 that had occasional false alarm issues. Cleaned them repeatedly. Finally contacted Nest - they told me to go buy new ones.

They were only 4 months old at the time and they would not replace them. $200 (they were $100 each then, no idea what they are now) down the drain.

Very unlikely they will get even $0.25 from me ever again.

Unfortunately I have the Zcombo units in three bedrooms and garage, and two Nest Protects (kitchen and hallway). So a mixed bag, and only the Nest units are interconnected. I was on just starting to replacing all my Zcombos w/Nest Protects when Google killed things and so stopped part-way along as I didn't want to end up w/the Nest units and no Smarthome integration, and didn't want to have to rely on listeners.

So I'm currently waiting to see if we actually get some sort of approved Nest integration option from Google, in which case I'll replace all my Zcombo's w/Nest Protects and be done and have an interconnected and HE integrated solution. Key issue is that my family strongly prefers the Nest units to the Zcombos, due to the friendlier voice messaging on the Nest Protects, so an option that uses them what they really want.

If Nest integration doesn't happen, I'm thinking I'll either find a Zwave interconnected system and replace everything w/that, or if that isn't a good path, get a dumb interconnected system (as you noted) and use one or two of the Ecolinks (for backup/increased saftey) to get me HE integration. Either way I'll have a fight w/my family about losing their beloved Nest Protects, but I'm tired of having a mixed system that doesn't communicate, and clearly it's also not as safe as I'd like it to be.

due to the friendlier voice messaging on the Nest Protects,

Kiddie makes an alarm with voice, although probably not as informative as Nest (the Nest voice will tell you which alarm detected smoke).

My wish list: wireless interconnect, some means to communicate with Hubitat but not dependent upon it, wired or battery options, voice. Dual ionization and photoelectric. CO detection.

Would be cool though.

Well, I’m pretty much describing the Nest Protect, although its Hubitat integration is unofficial, and yes, it is expensive.