A couple of months ago, I had an issue where my devices started queueing up commands. The resolution ended up being to restore from a backup, and that did seem to fix everything (after I went into some of the automations & just saving & then exiting back out, which seemed to reset the scheduling). When that happened, the scheduled tasks would not turn on/off things, and also motion events were not firing (i.e. motion sensor triggers a light to come on). Again, the restore seemed to take care of that, but I never did figure out what caused it.

Since then, though, I have been experiencing intermittent (but mostly "mittent"

issues with an automation that should turn on my driveway lights at sunset (+30), and back off at sunrise. It turns on reliably, but does not seem to want to turn off. Here are a couple of screenshots: 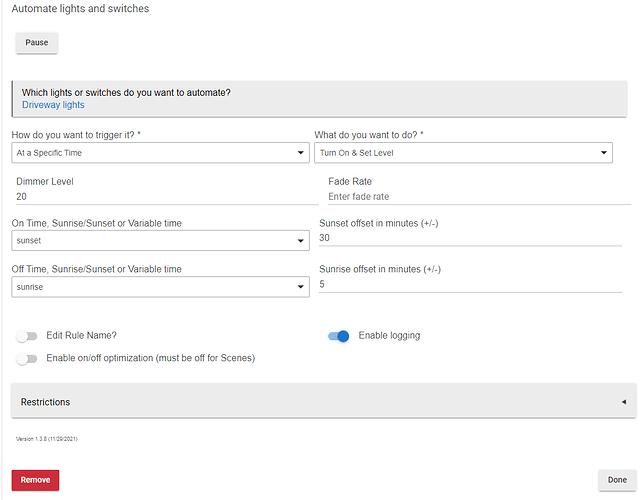 So I have the following questions:

Thank you for any help or pointers - I appreciate it!

The logs will be in the "Past Logs" tab of your Logs page. You may have to load more a few times via the link at the bottom to work your way back to the trigger time, depending on how many logs are being generated on your hub.

In addition to the Simple Automation logs, I'd also advise that you turn on the highest level of logging for the involved devices. This may provide some clues, e.g. Hubitat sends the command but network congestion or signal strength means it isn't received...

Is this a Group? If so, check your group settings to see how the group switch is configured to reflect the individual device states...

it's not a group - I am just now noticing that when I operate the switch manually (it's a zooz dimmer paddle switch), there are no entries in the logs... wondering if I should remove/re-add it & try that? Can I do that w/o losing the device ID so that I don't need to change all of the interactions, WebCore, etc to the new device ID?

Exclude/include will change the device id for zwave (like zooz) so I wouldn't do that as a first step...

On the device page, there should be settings for debug Logging and DescriptionText Logging - turn them both on, then try to toggle manually again. Hopefully that will generate some logs

In addition to what @dkilgore90 suggests, try turning it on and off from the device page. If that works OK it is unlikely to be a zwave issue and I doubt if excluding it and including it again will help.

Ok - small update - I tried turning it on/off from the device page - while it did turn on/off, nothing hit the logs. I did a Zwave include (pressing up on the paddle 3x quickly), and gave the device the same name - that seems to have preserved the Simple Automation rule, and also now when I turn it on/off, it is showing up in the logs... I will have to wait until tomorrow to see if it actually turns off!

Thank you for the help - stay tuned!

Hey if that works, great!

My zwave knowledge is by no means extensive, but I think ZWave inclusion causes the hub to issue a new network ID to the device. Name is something fairly arbitrary. It is possible you created a duplicate device with the same name. Logging is on automatically when a new device is created, so logging would be on for this new device as well. But hopefully I'm wrong and this resolves your issue.