Show us your favorite voice controls

I have a google home that I use mostly to set timers and help answer my kids random questions. I would love to integrate it more with my Hubitat but don’t know what I would use it for that would make it worth the effort. Looking to hear from the community what their favorite/most used commands are that they just can’t live without. Thanks in advance for sharing!

I have tried the alerts before but found chrome cast integration to be very intermittent. I have chrome cast helper but that didn’t really address the issue.

The other main issue I have is when to signal the alert, will I be within earshot to hear it? But if I repeat the alert how many times do I really want to hear it? Perhaps I need to setup a motion detector near my hub and queue up Low priority alerts until motion is detected. Or maybe I just get more google hubs around the house so I can hear it anywhere I am.

I use Alexa, but I'm sure Google provides comparable functionality. I honestly can't remember the last time I touched a light switch, and I have no need for the dashboard; everything is either automated or voice controlled.

I have Echo devices in most of the rooms in the house, configured so they know where they are. Then "Alexa turn on (or off) the lights" is everything I need (for the rooms it doesn't make sense to use motion sensors).

"Alexa, turn on movie time" to activate the scene (lights down, tv on, etc).
"Alexa, good night" to turn everything off and set the mode to "night"

I have motion sensors in all rooms.

The kids never remember to shut their lights off. I only use them to turn off lights after no movement for 20 minutes.

Totally fair. Personally I don't like to use motion sensors in rooms where people read, too often lights turn off when you don't want them to (or you have to set the delay for turning them off so high it's pointless). Having to wave to get the lights to turn on causes me an irrational level of irritation.

This is why I included a pause switch per room if needed.

That's fair. Most of the time it would just work, and when you need the lights to stay on, use the switch to keep 'em on. Probably better.

And to keep it on topic, I guess you could make that a voice command, right?

Then when you turn the light off, use a rule to turn off pause if on.

Hey @dondo, so you are saying you can say "turn off the lights" and since Alexa knows which room it is in it will only turn off those lights? How is that configured in general? I have to tell my Alexa(s). ,,, turn off the FAMILY ROOM lights or turn off ALL the lights, or turn on the KITCHEN lights.... it would be cool if I could just say turn not he LIGHTS and it would know the context we are in.... are you saying that is doable?

are you saying that is doable?

I have lots of favorites, but here’s one I just added. Waiting for the additional HEM I need to monitor its power, but using Google Routines, we can ask several different ways if the dishes in the dishwasher are clean. I’m a rinser, so sometimes even I have to look very closely.

With this rule, my Google Nest Hub displays and speaks when the dishwasher last ran so we can better determine if they’re dirty or clean. The addition of a sensor that can detect the door opening after a cycle (tilt or contact) can pretty definitively label that event, but my dishwasher doesn’t have room for a sensor. Not giving up on that aspect, but for now, at least knowing when it was last run is a step in the right direction.

Actionable Notifications... it's too bad this can't be done in HE.

Do you have an app for this? I was just thinking about creating something

I use the motion lighting app, and rule machine.

I ask Alexa if I can put the washing out, she'll respond according to WU data from HE

0-20% chance
'There's not much rain around, you'll be fine to put the washing out, there's only a ' {percentRain} ' percent chance of rain'

21-35%
'There's some rain around, the question is, how much of a gambler are you. You can put the washing out, but don't blame me if it rains. There's currently a ' {percentRain} ' percent chance of rain'

36-55%
'There's a fair chance of rain, you'll be taking chances so keep a watch on the weather, there's a ' {percentRain} ' percent chance of rain'

56-65%
'Well, it's gonna rain at some point, for how long and hard, I don't know. Keep a watch on the weather, there's a ' {percentRain} ' percent chance of rain, last thing we want are wet clothes '

Above 65%
'Yeah, I really wouldn't bother even going out today, let alone put some washing out. There's a ' {percentRain} ' percent chance of rain, have a brew instead, and pop the dryer on'

My Goodnight routine will flick a switch "goodnight" and trigger a check on all windows and doors, then respond accordingly. If open, Alexa will tell me which are open. If closed, she'll bid me good night.

Open.
'Going to bed Sir, well there are windows and doors still open or unlocked. Please close the ' {openwindows} ', and run the goodnight routine again '

Closed
All doors and windows are closed and cross checked, its time to take that flight called goodnight, Goodnight sir, Sweet dreams.

I ask Alexa if I can put the washing out, she'll respond according to WU data from HE

0-20% chance
'There's not much rain around, you'll be fine to put the washing out, there's only a ' {percentRain} ' percent chance of rain'

Can you show us the rule you have in place that does this?

I'm not suing RM, but this is the piston I use. 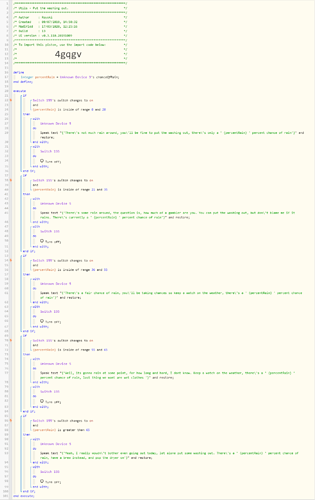 Create a variable for chanceOfRain for the WU device. (or whichever weather service you are using)

I have a virtual switch which is auto off after 2s.
This is the trigger for Alexa to turn it on, via an Alexa routine, or you can add to a dash.

This then triggers the piston in webCoRE (or RM if you like).

Then you set it up for each chanceOfRain percentages you would like.