You may want to try the Basic Rules app first. Before it existed I had all my rules in Rule Machine. I've since converted all but a few of them to Basic Rules. They were much easier to create, maintain and have been much more stable for me.

Thanks for the feedback....it IS simple but doesn't have conditions...
I wanted to "
when trigger A happens & condition B true, then take action C

Can you give me an example of a "condition B"?

when trigger A happens & condition B true, then take action C

That sounds like:
A - Trigger Events
B - Required Expression
C - Actions to Run

You may take comfort from the fact it becomes less confusing when you get used to it. It has its quirks but they gradually become second nature

However feedback can help improvements!

just one other suggestion ....indicate what is in yellow is the Current state --first glance THAT was confusing.... note its awesome that it shows current state ....its just unclear thats what that is

one more question..where is the condition in the summary ?

Conditions are conditions for your actions. Not "conditions that must be met to run the rule." If you want to restrict the rule from being triggered, that's where required expressions come in.

The current state is the bit in parentheses. You can turn those on/off with the "display current values" switch.

Right above the Trigger is a slider to turn on Required Expression. Slide that to on and add your virtual switch to it. The rule won't even trigger unless the required expression is true.

The reason I asked, is because a condition like that can be easily used as "restriction" in the Basic Rules app. As @cdallum suggested, Basic Rule is not as "basic," despite its name. My home runs 90% on Basic Rules!

wow, thanks to all for the great explanation ...i missed the slider to turn on required expresssion
This makes much more sense AND i do see everything in the summary

I still think it would be helpful to label what the info is : )
i.e
Disable Garage Door Close (switch is OFF) is on (condition is FALSE)

I think you could still consider Basic Rules for this case by using a Restriction when the switch only meets a certain criteria.

Excellent explanation from @bob692006 . For what its worth, like anything, and like what @Inge_Jones mentioned, once you get used to it RM becomes second nature.

Despite the availability of several native apps such as BR, ML, RL etc etc. for various use cases, since I originally began my HE journey by learning how to “program” my HE with RM a couple of years ago, I just got used to it and its logic. Because of this, the vast majority of my automation is done in RM as I am just used to it. I actually got more confused (despite the “ease of use” of the various other native apps) trying to use all the different native apps that were supposedly more adept at handing specific use cases, because that required me to keep mentally switching between the different protocols, menus, structure and logic in each of these apps.

Not saying that your complaints or suggestions for improving RM are not valid. They are, as even those with programming/coding backgrounds have stated that “getting” the logic behind RM can be challenging. But again, that may just be because they are just used to doing things a different way. All I am saying is that YMMV depending on what you are used to (neuroplasticity aside). After experiencing the multitude of apps available for each use case (lighting control, notifications, simple rules, etc), RM has become my default go to app in MY particular case as I find it rather easy to use (and certainly the most flexible). But that’s just me. I would encourage you to keep at it and keep making suggestions for improving it (but don’t get discouraged as just like learning a foreign language, at some point it will just “click”). Good Luck!

Thanks for all the suggestions.... i tried the basic rule machine.... and need 1 more question answered... how do I say ANY of the 3 garage doors close 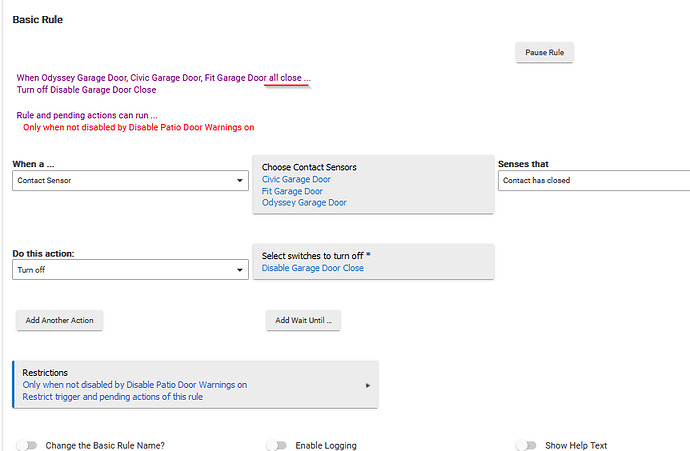 That's odd - mine default to Any!

No, I take that back. It had changed after I changed the type of sensor and reopened the rule, it seems to be ALL for contact sensors and ANY for motion sensors. I do feel a lot more confident of what I am doing in the main Rule Machine.

Well, you didn't mention earlier that you had multiple devices in the trigger

Oh! I can see why, it does make sense now you explain it, but it's still a bit confusing when it actually happens while creating the rule. You expect if it changes that you'll be able to change it yourself

you'll be able to change it yourself

To be able to change it yourself, you can upgrade to Rule Machine by importing the Basic Rule into it, for enhanced user power