that's indeed quite the opposite of what my app does since it opens the windows proportionately to how cold it is, the cooler the shorter the opening... Not much I can do for you here other than completely reverse the purpose of this feature.

I might however be able to add an option at some point, I'll see what I can do. Just know that the windows opening system, in order to be safe (i.e. not opening the windows in the middle of the night in the baby's room, in the winter or when there's a heavy rain...), takes many, many variables into consideration so it might take a while before I can bake something adapted to your needs. I suggest that in the meantime you go with RM, where you could still implement increments based on if/then conditions and defining different temperature thresholds using different local variables, corresponding to different operation times of your blinders.

No worries thanks for the asist anyways. If you do add something in the future please let me know.

My plan wasn't full inch by inch, more of if it's rising quickly shut to 50%. If it keeps rising shut to 25% then if still getting hot shut completely. Then if the weather improves outside or it cools down inside start reversing the blind to open.

I am interested in this app as I have several virtual thermostats and all are connected to baseboard heaters.

In addition to that, I use Thermostat Scheduler to apply a heating temp based on modes.

Now, what would happen if introduce your app into the mix ? What I would be looking for is to have your app work while in a specific mode and regulate the temperature based on external temperature. Would this work with Thermostat Scheduler, or would I have to forego that, or would this just "slot in" alongside ?

In the case of my living room, I have 2 baseboard heaters, but also one additional fan heater. Currently I have a rule that says if the temp is below 1.5 degrees C from the set temp, then the fan heater kicks in and turns off when the desired temp has been reached. I see in your app that I can set a alternate heater. I assume that is for a situation like this ?

I haven’t tried and I couldn’t know for sure until I’d try. However know that my app learns from new input so if any other app controls your thermostat it would probably generate false positive user input and render the app useless. I suggest exploring the new app while temporarily disabling the other apps or just make sure that they don’t run under the same location modes.

egrees C from the set temp, then the fan heater kicks in and turns off when the desired temp has been reached. I see in your app that I can set a alternate heater. I assume that is for a situation like this ?

Yes it works as a complement to your main thermostat when you need more power for heating your room. It has also the ability to optimize power consumption through priority decision making for which you can set your preferences in settings.

I guess that in theory it should work. The only thing that Thermostat scheduler does is to change the setpoint, so in essence it is similar to doing it manually. I will have a go at this and report back.

Yes do not hesitate to report back because there are many scenarios I haven’t had the chance to test yet.

Well, haven´t had time to test this until now. I installed the app and was going to setup a thermostat, but then noticed that it seems to be fahrenheit only or is there a way to switch it over to Celsius ?

If you have the latest version, you have an option for Celsius on top of the main settings page. It's still beta, but it should work. Let me know if any issue arrises. I was not able to test it in real conditions because I use F only.

Your inputs, for now, still need to be in Fahrenheit, though... Just realized this now! You can use a quick converter online for you temperature preferences inputs in settings. You will have to do that only while setting up the app.

I'm unable to fully assert how it will work in real conditions but it seems that it should work with Celcius values inputs in your temperature settings (contrary to what I aid earlier). Let me know, I could really use your feedback on this.

I'm pushing a new update with some fixes in that regard. You might want to update your code and go through your settings again to make sure all values you entered are in C and that you enabled the "celcius" option.

Thanks, I tried to set it up, but get an error when choosing method of evaluation and the outside temperature seems to cause the issue. 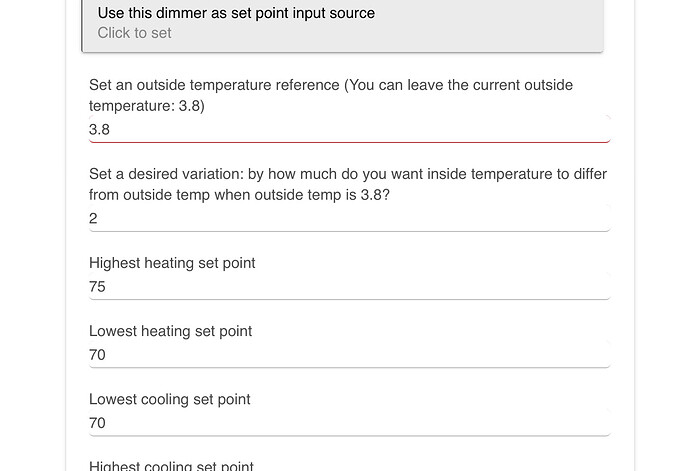 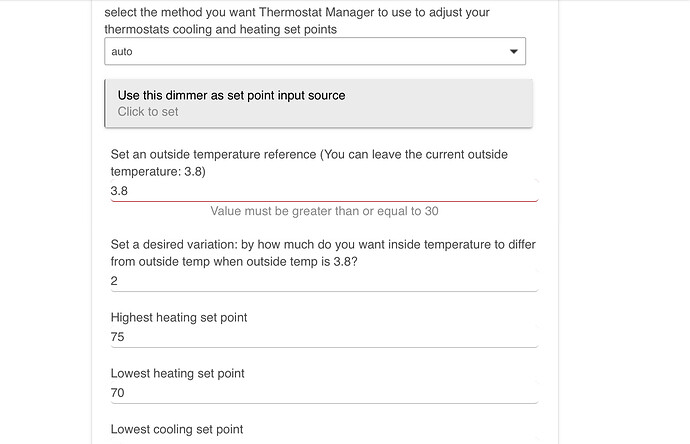 I see there's a problem with the 3.8 which is outside of the range because it used to be for Fahrenheit. I am fixing this now, I'll let you know when it's updated. For what regards the error message, can you also show the logs? Without it it could take hours before I can reproduce the error. Thank you so much.

I have published an updated and corrected version. Hopefully functional with Celsius this time.

I would have shared the logs, but they weren't there. I am realizing now that I should have turned them on first. Do you still need them?

Not unless you get this error again after using the latest version.

Thank you again for accepting to help me with that. I really have no other good way to test such a conversion to Celsius than having someone trying in real conditions.
Best,

Ok, so I was testing this again and now it seems that when I choose auto evaluation method it will request a dimmer, and on dimmer, it will not ?

And on a similar note, I am having a hard time wrapping my head around how this should work. My thoughts were that I would enter a temperature on the thermostat and then your app would use the external temp and other variables to raise or lower the thermostat automatically based on some calculations.

In any case, when I choose dimmer, I do not have to set a dimmer, but i can also not move further as I don´t get that option:

I came from Vera, and I had a similar app on there. This one.

This is then where i struggle, because in the screenshot above, it shows the temperature as 3 degrees (centigrade, yeah, "summer" in Iceland is brutal), but then it ask how the inside temperature should differ when 3 degrees. The answer here would probably be 18 degrees, so that the internal temp is 21. Is this thinking correct ?

Ok, I'm publishing a new version and fixed the menu issues. I also made the dimmer optional - although I highly recommend to use this option since this is the only way to reliably have the app set new values without them being considered as user inputs. When the app "decides" to, for example, lower your cooling setpoint because it's very humid (the whole point of this app), then this will trigger a thermostat event. This event, in return, will NOT be considered as a user input (otherwise you'd have an infinite feedback loop). The issue is, however, that when you are yourself going to want to change your cooling setpoint, the app might override this request, thinking it's coming from its own adjustments functions and so you would have to do it several times until the app catches it as a new user inputs (it all depends on the step at which your input took place, on what the app was doing at that precise instant). The virtual dimmer, on the other hand, allows for certainty on the fact that this can only be a user input (although the app is still capable to adjust the dimmer from new inputs on the thermostat, but that's another long, long story

Thanks again for your awesome feedback. I stopped coding for now and there will probably be some more issues but fortunately it'll be functional this time. Sorry for the mess I have left you with yesterday !

The vera app you referred me to is quite interesting and powerful for it does some limited machine learning. I have a similar app that can work in parallel with my current thermostat manager, but it is quite more ambitious and, however, required too much computing power to be used at the moment.

Instead, I have implemented some more complex math functions to compensate for the difficulty I had to implement some more serious machine learning. Machine learning requires layers of dynamic multidimensional arrays and matrixes that can lock a hub, even when only this app would be running on it. I did succeed in improving the efficiency of the database management but, for now, the algebra based algorithms do a better job ressource wise. However, you'll have to adjust your inputs on a regular basis, unlike what my A.I. thermostat manager allows / will allow at some point.

Thanks for the update and information about the dimmer etc.. I will check this out and report back.