battery drained twice in less than a day.

Whoa, that's a thirsty one. I've noticed this too; if your Zigbee mesh is really strong then I've found the batteries last for ages, especially if there are IKEA repeaters in there. However, if there's interference or the mesh is a bit weaker, they can drain the battery in no time.

I had one on my security mesh which is older equipment. The battery was dead overnight. Moved it to my accessories mesh and linked it across with Hub Mesh and it's been fine for weeks now.

The two in my study (where there's plenty of interference) have lasted for a month, but both were dead today. I've just replaced their batteries and I had to rejoin them.

Also, I've checked again and there's still no sanity in the battery data reported. I think I'll remove that information from this driver and rely upon the hourly reporting for presence. Anything else is fiction until the battery data can be deciphered.

We relocated recently. It's not a huge house but it's not small either so still getting an idea of the current state of the mesh. I've just moved from a 110v to a 220v system so took the opportunity to leave dozens of my NA ZW devices behind. Left them on the trusty old C5 and started anew with a C7. I do know that there is a Tradfri repeater no more than 25 feet from where the button used to sit and it still drained the way it did. Compare that to the Sonoff Zigbee Switch which is also nearby and that button is already going on a few weeks with the battery still close to a 100%.

I do know that there is a Tradfri repeater no more than 25 feet from where the button used to sit and it still drained the way it did. Compare that to the Sonoff Zigbee Switch which is also nearby and that button is already going on a few weeks with the battery still close to a 100%.

Weird. The firmware must be keeping it awake for some reason but why, I have no idea.

In the past I've rather enjoyed sneaking out the mesh key during a bind process and using Wireshark to sniff out what's being transmitted. I'd love to have a week off to tinker with the Trådfri hub and the devices to see what they're saying. Alas, I do not believe that luxury will appear in the near future!

I've just updated the Tradfri Button driver to increase the reporting interval from every hour to every two hours. I've recently had the battery die in another of my buttons, which means they're lasting on average about 1 month, which is not great.

If you would like to reduce the reporting interval on a button, open up the device page, click the button once and then press Configure within 3 seconds. This will send the new configuration.

When the battery dies these devices appear to need reconnecting to Hubitat with a reset. Replace the battery, put your hub back into pairing mode and tap the reset button four times. The device will be recognised as being previously paired.

Oddly the button sent what looked to be a reasonable battery report of 3V, so I'm going to leave that code active for now and monitor how this one goes.

I'm seeing a warning message every 10 minutes waiting for the first presence report.

Device was added 12+ hours ago.
It responds to button press and held rules I have.
Any idea what might be going on? 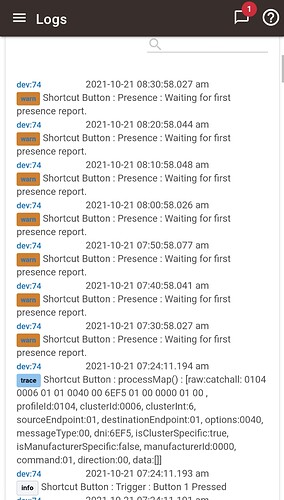 I've started seeing this on a couple of devices since upgrading. I'll look into it.

FYI, yhe posts by RoisinDubh79 on github are mine as well.

Cheers, think I've sorted the bugs now. Give HPM an update run or copy-and-paste the code back in again, it should be sorted.

Been running a couple days now with the latest update.

Anyone a solution for the battery drainage? I've noticed it not just for the shortcut button but also for the Symfonisk. Right now, a battery lasts for about a month.

Yeah, I see the same thing here. I'm experimenting with the button at the moment, the current driver doubles the reporting interval (every 2 hours now) and that could easily be extended further.

I had more luck with the dial; that lasted at least 2 months, but still not enough. Earlier in the year one of the buttons in a poor strength Zigbee area drained a new battery overnight.

Don’t know if you’ll be able to solve the battery drain problem with a driver. I’ve had the same experience with the Symfonisk Sound Contrller and other drivers. Yet, when paired with a ConBee 2, it lasted for several months.

Ok, but what's the difference pairing it to HE compared to the ConBee 2? Maybe @mike.maxwell or other staff members have an idea. Especially in case of the Symfonisk, having in mind, that there is a native driver.

Don’t know if you’ll be able to solve the battery drain problem with a driver. I’ve had the same experience with the Symfonisk Sound Contrller and other drivers. Yet, when paired with a ConBee 2, it lasted for several months.

Honestly, that makes me think that it can be solved by a driver, perhaps with an alternative configuration or overcoming some quirk in the join procedure.

Especially in case of the Symfonisk, having in mind, that there is a native driver.

Interesting, what are people's experiences of battery life with the HE native driver? Sadly they are closed source, which I think is a real shame. Though I do understand HE wanting to protect their investment in driver development.

BTW, in the latest E1812 driver I'm seeing something which look like sensible readings from the battery. It may... ahem... have been a pretty stupid mistake on my part. But no promises; I'm happy to take the blame if the readings do actually make sense now.

Interesting, what are people's experiences of battery life with the HE native driver?

Well, that's bad and good. Bad that it's still rubbish, but good that I don't have to feel that the solution has already been reached and I'm just not allowed to know what it is.

At least, there is hope.

Ok, I did a little research. The battery drain seems to be a common issue, as soon as the remotes aren't directly connected to a bulb or curtain, but to a hub. Going through HA-forums, github, reddit etc., pretty much everyone reports the same thing.
A few common reports I've identified:

Overall I think, yes it is a software issue, but from the devices themselves. Ikea build them to be connected directly to one device (bulb, curtain, plug) and just not within a network.
What could potentially solve the problem, or at least ease it, would be to make the device report a little as possible. No presence, battery status maybe once a day (?), something like that. Maybe another solution would be to change the device firmware.

As I've mentioned before, I've no experience in coding whatsoever, so I'm out on applying these solutions, because I would just break my stuff. So if anyone is willing to try, I would really appreciate that.

Also it seems, that some people are already trying to play around with so firmware: https://github.com/basilfx/TRADFRI-Hacking

I've changed the presence report interval for the Symfonisk to 120 Minutes. Let's see, if this changes anything.

Ok, the battery drained within 3 hrs...