These are a couple of tiles I have on ST using ActionTiles. The images come from a URL source on a refresh schedule. Not sure how you'll implement your version of it

Thanks for considering it though.

This popup is displayed when clicking on the weather tile. To get the weather tile in the first place, add a new device in the Hub (new virtual device -> OpenWeatherMap).

The first time you open it it'll do a search for the 'city' name that the weather tile is using and display results found. I've found this search API to be VERY picky so if you can't get it to work let me know what city you're using and I'll try to figure it out.

As I mentioned in an earlier post, these widgets look really nice and I'll see if I can embed it in the dashboard as an option too (replacing the one that's there)

@jpage4500, Still doesn't work on my car's Android headunit (where it was working fine before the update). When I try it on my Samsung S10+ 9 times out of 10 the dog just keeps chasing its tail (no error, but no action either). The 10th time it does work, but very slowly.

Yes, the tiles never refresh on their own after pressing one. It takes a manual refresh (which right now only works on the local network).

Update: I upgraded from 1.0.247 to 1.0.253 on my Samsung phone. Now the dog stops chasing its tail but it says "command failed" after about 10 seconds (after pressing a tile). A standard HE Dashboard works fine from the WAN.

Update 2: Make sure to switch off Wifi access to the local network when testing (not just turn on cloud login). Looks like Dashboard still uses a local login if it can find it. Both my Samsung S10+ phone and Android 9 car unit fail over cellular / Cloud login (sever not found).

The first time you open it it'll do a search for the 'city' name that the weather tile is using and display results found. I've found this search API to be VERY picky so if you can't get it to work let me know

I've also found a couple of other issues just playing with the app over the weekend and will look into these as well..

I haven't loaded the last few versions so maybe you've already done this but I'd like to see the ability to leave blank spaces, like HE's dashboard, for organizational purposes.

I'd like to see the ability to leave blank spaces

you must be using a bigger tablet than me

I have a weather virtual device on the hub and an HE tile shows information. The tile also has a generic house icon. When I click on the tile in the Dashboard App it just brings up an Options screen. Under attributes it looks like it is pulling data OK. Is there something more I need to do? (this is all in lan mode, not cloud)

@jpage4500, Additionally, adding an Image URL crashes the app (Samsung S10+, on local network). I have to uninstall and reinstall to get the HD app to restart (I've done this 4 time). This is the URL:

I tried both an https and http link, both crash it.

I see the problem.. I added last-second logic to edit the URL and refresh rate for an existing image tile and ended up breaking adding it initially. I tested the URL you listed and it looks good. I know it's a PITA to type in a long URL on a phone so I added this one to the 'examples' list so you won't have to type it again. I'm hoping with some of these examples that at least it can save a little typing for some if you can just change the last part of it.

@jpage4500, What version number is that? I just installed 1.0.262 and it still crashes when adding a new image tile.

The weather tile still doesn't work. Here is the info it grabs (let me know if you want the JSON).

Sorry for the confusion. I've been pushing out several versions the last few days and Google Play is really slow about showing new versions. My goal is to fix any crashes/bugs I find quickly and I think the crashes you saw were being reported.

The fix I added for the image tile was in version 1.0.263. However, there's been 2 more versions since then and 1.0.266 is the LATEST and it's the version you ultimately want.

I have the same issue for my city too.. and it's been driving me nuts! Ultimately, I'm trying to use an internal API that the site uses to lookup a 'city id' and it's not meant to be used like this. The site is likely detecting the request isn't coming from weatherwidget.io and blocking the request.

It's a shame because that widget really looks great - I just need to get the generated code in the app and want to make it as easy as possible.

What would ultimately work if it's not too difficult for users is if they could create the widget on their own, hit "Get Code" and then just type in this part of the resulting code:

That would likely work.. it's just the internal API that the site uses to get this field from which isn't working. Or, I could find another weather widget - but it was the best one I found (when displayed in a popup window)

I see how to grab the code, but where does one put this?

Right now the app is trying to do all of this for you. It does a search for the city name that's part of the virtual weather device and presents the results found. Then, it needs to call 1 more internal API to get that code that you see above. Both of these API calls seem to fail a lot.

The weird thing is - I just tried again now and it worked for me.. the same thing failed just an hour or so ago. Once we get the code seen above there's no need to fetch it again - so it's just a 1-time-only thing at least.

I'll probably just have to find a more reliable weather widget or maybe try this one and if it fails then prompt to enter this part of it: 35d12n80d72/matthews

or maybe try this one and if it fails then prompt to enter this part of it: 35d12n80d72/matthews

I just checked in a change (version 1.0.269) to prompt for this place ID if we can't fetch it from weatherwidget.io server. The crazy thing is - now I can't get weatherwidget.io to fail so I haven't tested this backup logic. Anyway, hopefully this will do until there's a more robust weather widget that I can implement.

Just started playing with this... how do I display the power attribute of a device instead of the switch?

The fix I added for the image tile was in version 1.0.263. However, there's been 2 more versions since then and 1.0.266 is the LATEST and it's the version you ultimately want.

@jpage4500, looks like 1.0.269 has fixed most of my problems (cloud tile refresh is slow, but it is working). I love the new image/url tile. I've sent you an email with a text file of weather loops; I think you'll want to take a look at it.

For the weather app I did have to grab the weatherwidget.io code. It also worked great. As a feature request it would be nice to have the temp and humidity of the icon (as the info is already in the device info). Maybe make that optional.

Anyway, great job! I appreciate all the time and effort you've put into this!

Update: can you add a way to center the image in the image tile? I'm using a satellite image loop and it mostly cuts off my state. Something like center Left/Right/Center and Top/Bottom/Center radio options. No a big deal if its a lot of work, the popup is seems to be working fine.

it would be nice to have the temp and humidity of the icon (as the info is already in the device info).

Is this what you're talking about? 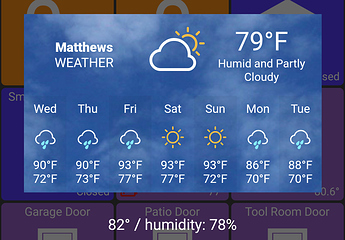 I haven't checked but I do want to make sure the weather popup refreshes automatically - like the weather tile/device does today.

For the image view, I was wondering if it would be good to put the last updated time somewhere on the tile? Or, would that get in the way? 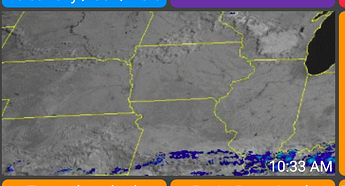 I'm currently scaling the image to fit the tile but don't want to change the aspect ratio so the image looks stretched. There's an option to make the entire image fit inside the tile but that would result in unfilled space in the view so I went with the option to fill the space - but at the cost of losing some of the image like you're seeing. There is a more advanced option to show the top/bottom or left/right sides of the image (whatever part is cutoff) which I can look into though.

I just saw the screenshot from your email. If you're talking about the weather tile, I do have temp and humidity in there. I wonder if your weather tile has different capabilities as the one I have? 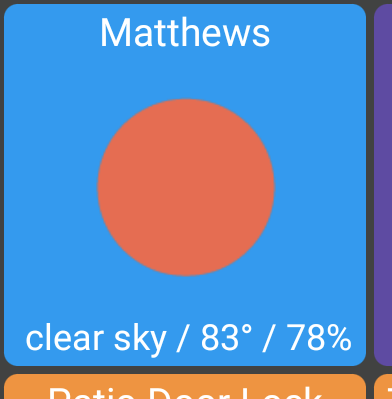 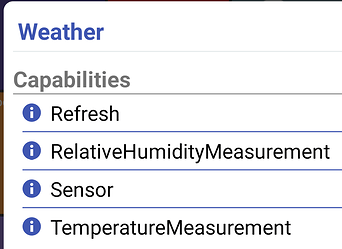 I'm looking for "TemperatureMeasurement" and "RelativeHumidityMeasurement" in the device before showing these. I could just look for the attributes "temperature" and "humidity" instead