is it a one-off or are you looking to do lots of mods? maybe I can help?

I appreciate the offer. I want to modify several tiles and I just don't want to annoy you with that.

I am having a terrible time with Manage Hidden Devices. Every time I use it, I create trouble. It always adds devices that I did not select and not add devices that I did select. It seems to affect the same devices every time. I have repeated the process over and over, same result (definition of insanity).

In all honesty, i also have experienced the managed hidden devices problem myself. You'll need help from @jpage4500 on that one as although mine settled over time, I don't know what caused it or what affected it... surely he will!

I am having a terrible time with Manage Hidden Devices. Every time I use it, I create trouble. It always adds devices that I did not select and not add devices that I did select. It seems to affect the same devices every time. I have repeated the process over and over, same result (definition of insanity).

I can try to help - I know there was an issue with un-hiding devices a while back but it's not something I use very often. Is there something I can reproduce on my device? Or, if you send me the device logs from the app I can try to re-create what you're seeing.. just let me know.

I've one problem however. Any change I make seems to affect all bulbs. So bulbs that are color capable, I loose the ability to color config them from the tile face, although of course it still works nicely inside the tile management.
In the image below - I've got a 'team' of 2 Sengled bulbs which are dimmable only. No CT or color. As you can see, your implementation looks amazing. To the left, is a Group called Office Lights. Since the group is all-purpose and assumedly the device type is derived from HE, they pull a Device Type of Dimmable RGB light. HE is feeding you crap - there is no way in devices on the HE for me to flag this group as Dimmable only. All groups, regardless of ability appear this way.

I wanted to give everyone a quick preview of the next version. This time around I mostly focused on lights - primarily how to adjust color, dimmer levels and color temperature.

At the same time I've been trying to make the main dashboard a little cleaner - keeping things simple with only a primary 'click' action and putting extra device options in a separate (and larger) popup that's displayed on a long-click. For lights, I removed the little button in the top-right corner (change color). I also changed the light-bulb to just be yellow (on) or clear (off) instead of filling it in with the current light's color (RGB)

I also wanted to remove the ability to change the dimmer level from the main dashboard. I just found it too easy to accidentally adjust the dimmer when I was scrolling up and down. However, I didn't want to break things for users so I kept the option to use the slider. By default now though it's just the circle (but unlike before you can't adjust the brightness by swiping left/right).

The bottom 2 lights in the images below are RGB (color) capable:

Notice on the first 2 options the 'color' is a lot more subtile.

If you long-press on the light this is the new options screen. Adjusting brightness, temp and color should be easier to do here 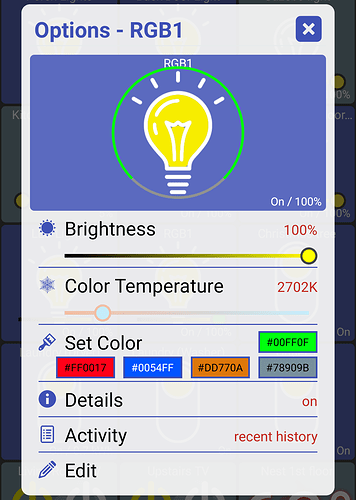 Selecting "Set Color" shows the color selection popup. Or, you can select from the last 4 used colors directly 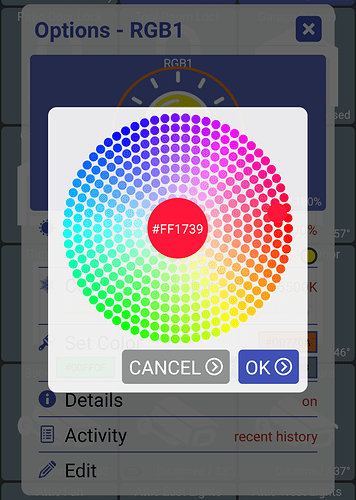 Anyway, the reason I'm giving everyone a heads-up on these changes is to give you time if you want to switch to the production version of the app (from beta). I want to avoid what also happened with the official Hubitat app recently too where the beta version broke geofence. It made me realize I don't update the production version often enough where you almost need to use the beta version to get any updates. From now on I'll try to push beta changes to production roughly 2 weeks after release.. hopefully enough time to iron out any issues.

I did also push the previous beta version to production if you want a little more time for new changes.. I try my best to test everything but the bigger any app gets the harder it is to catch all of the edge cases! But, please let me know if you see any issues I might have missed

Since the group is all-purpose and assumedly the device type is derived from HE, they pull a Device Type of Dimmable RGB light

Specifically for this case, you can now change an RGB device type to 'dimmable light' or just 'light' to remove any color-related settings.

Is there a way to make additional pages? For instance, press a button on the menu that takes you to a different page with different buttons? Or am I missing something?

oh boy! I can't wait to get back online and see this!

I cannot upload photos. It just sits spinning at 100%. Suggestions?

Is there a way to make additional pages? For instance, press a button on the menu that takes you to a different page with different buttons? Or am I missing something?

Would a folder do what you're looking for? You can also create a link to an entirely different dashboard.. that's a little more complicated but I can put a guide together

link to an entirely different dashboard..

A little different use for this software....My family loves playing the card game Hand And Foot. I have a Amazon Fire HD on the table, using it as a scoreboard, player/game tracking, reset game, etc. I control the board either from the display or from my phone. Works really well. 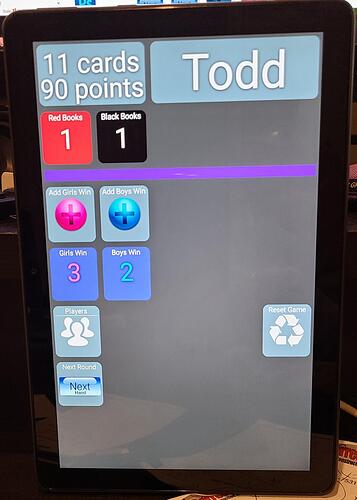 A guide for linking to a different dashboard would be great - I'd like to have the date/time on my dashboards, which doesn't work when you are using folders since you can apparently only have a single date/time on a dashboard.

I'm not sure a folder would be a proper aesthetic vs a menu button, but yeah some instruction might be needed. My thought process' hearkens to the way Hubitat's dash board does it. A simple icon pointing to the new menu.

The latest update does not allow you to change the brightness of a bulb by sliding your finger horizontally. Now you have to long press and make adjustments. Was this feature removed on purpose?

You can change the icon on the folder tile. I like using folders as it lets me see at a glance if anything is on in that folder. For example I have one per room, and also one that has just the space heaters in it, as we don't like to have those on unsupervised. Any indicator on the heaters folder is easy to spot. At top level therefore I can see at a glance if anything is on, or sensing motion, in the entire home.

I think I'd have liked to have a choice between the two formats.

I'll work with it more and see if I can provide more useful information.

Is there an easy way to enter a whole number into a number hub variable? I am wanting to add up total scores for the game dashboard I am designing. I would like to be able to tap a tile and just have a numerical keyboard come up and not the alphanumeric board.

Also, I am using a "Number" variable that I created in the Hub Variables area. When I edit the tile, it says the Device Type is "Variable String." And when I type numbers into it, it becomes a string. I can make the conversion in webcore, but I was hoping to just enter a whole number.