My brother and I have an app in Play, so I'm well aware of how much fun it is to remember to update all the published locations. I'll play with the production version for a while and later install the Beta.

Quick FYI - my last update had a bug where all devices would show up with the generic icon. It only happened after logging-in and shouldn't happen if you're just updating the app from an earlier version. Anyway, It's fixed and should be available very shortly!

The ability to center the image icon differently

I just added crop/scaling options (1.0.296) which should take care of this. It can be found in the edit option for the Image tile

Love it! That works great! (with the one exception below). This app is really a great option for anyone looking for an easy to use Android dashboard, either for a home tablet or even for their phone. Like I've said, I use this on my phone, Fire tablet, and my Android car stereo!

Sorry to keep adding more every time you release a new feature. But....

it doesn't survive a hard exit

I'll get these fixed.

Once a tile is added to a folder, how does one get it out of the folder should they want

If you edit the tile, there's a new option "remove from folder" which will move the tile back to the main dashboard.

That seems doable. I'll add it to the list!

prevent exiting the app except with a pin number, great for single use tablet

It's pretty hard to prevent a normal Android app from exiting. The 1 exception I know of is making the app the default launcher. That was asked about a long time ago. I'd have to investigate how to do that.

I also found an issue with the images not being updated over time (it's being cached). That fix will be coming here very soon

For the hub update check, I rarely look at my Hub's webpage and often when I do I noticed an update available. So, I decided to have the app check and let me know if there's a hub update. It only checks every 6 hours so not frequently and you can disable this in the settings. I don't try to kick off the update from the app - just to be safe. But, you can open the update page in a browser so it's still easy to do from the app.

The only thing I haven't figured out exactly yet is how/when to remove the update tile after you update. You can delete it like any other tile. Or, if you wait 6 hours it'll go away on it's own. Anyway, let me know if it's a worthwhile feature.

I still have trouble with cloud mode. I have to toggle it off, then back on, and do two refreshes for it to work. After that it does work pretty well

I pushed a change (1.0.307) that should fix a couple of cloud mode issues including not starting in cloud mode on app restart. The app will also refresh device status every 2 minutes when in cloud mode since it can't receive push updates from the hub. Finally, if you send a command to a device (ie: turn lights on), the app will check the status of that device after 2 seconds. It used to wait up to 5 seconds for the hub to send an update (which will never come in cloud mode)

I'd still like to handle automatically switching into cloud mode and back at some point but hopefully this fixes some of the more annoying issues.

Edit - in this build you can also change the date/time format as well.. either pick from some common formats or enter a custom one!

I've been testing 1.0.307 in cloud mode (on both my phone and Android based car stereo), it works perfect! I just leave cloud mode select on my car and it starts up fine each and every time. Refreshes after a tile press work as expect. I drove in to a valley with spotty cell phone service (I tether the car to my cell phone for internet. I know I lost internet because my streaming music paused) while trying to open my garage door and it kept trying for probably 10 seconds before I got the crest of the hill and then the command worked and refreshed the tile! Exactly what I would want. I think this beta is ready for prime time! I'm not even going to dilute this praise with feature requests

This is a great app for a simple, yet versatile, Hubitat Dashboard for any Android device. Thank you!

This my dashboard running on my Android 7" car stereo. 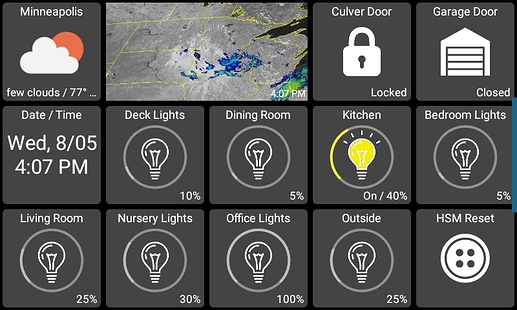 I've been testing 1.0.307 in cloud mode (on both my phone and Android based car stereo), it works perfect!

That's awesome to hear! glad it's working so well.

Are you using Google Play to get the app or downloading directly? I've been pretty disappointed how slow Google is to update the app on my 2 devices. I checked today and it said there was a new version - but it was from 7/30.. there's been many versions since then.. I love how Google Play will auto-update the app but if it's going to be so far behind it's not super helpful.

Anyway, there's still a lot more to come! I haven't forgotten about the dimmer/slider and a bunch of other things that have been requested.

I've been using Google Play as the link at the top of the page is directly to the apk and I can't tell if it is new or not unless I install it.

It has been taking 24-36 hours after you announce a new version for it to show up on my two devices. I've been manually refreshing about 5 times per day looking for updates

Maybe I can cut back to twice per day now.

Anxious to see the upcoming updates. That will just be frosting on the cake.

The 2 big changes here are showing the light brightness in a popup while you're adjusting it (it's hard to tell from a screenshot but this popup is only displayed while you're adjusting the brightness of a light). Also, there's a new slider mode which replaces the circle. To change the mode, just edit any dimmer light and you'll see it. I'll probably tweak the UI a little for both so let me know if you have any feedback on either!

1.0.313 is crashing on background color change for an individual switch or all switches. Chromebook C434.

1.0.313 is crashing on background color change for an individual switch or all switches

Thanks for the heads-up! I see the crash in Crashlytics but I'm not sure how that could happen normally. If you're able to send me a device log from the app maybe I can see what's happening. I also can't reproduce the issue either.

Device log on background color change. Also, the change doesn't take. I pick a background color for the icon. Select OK and the app closes. Same result for individual icon or all icons. Also am not able to change the theme, same result. That was previously working.

Select OK and the app closes

@jpage4500, my virtual button devices don't work on the Dashboard, probably haven't all along, I just didn't test them before. It looks like the tile isn't calling the button number so it returns 'null' and the request has no button to press. The area below the orange line is sending a command from the HE device manager, the area above the orange line is from pressing a tile in the app. The device manager press triggered my rule, the tile did not. 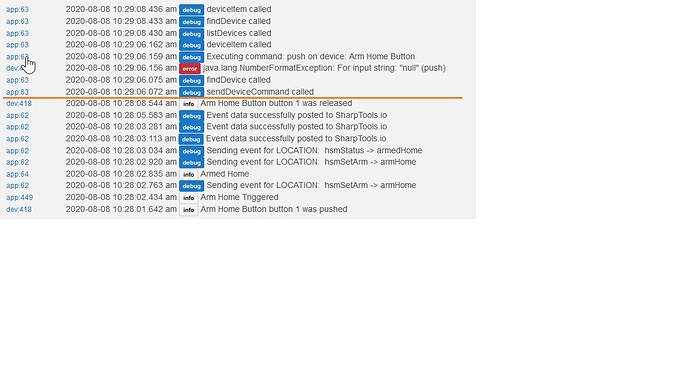 Thanks, that fixed it for individual tiles and themes.

Adding support for Buttons is also on my TODO list. I did recently add support for sending any of the commands that a device supports which is probably how you were able to send a command to your virtual button. But, I haven't yet added support for passing arguments to any of these. That's coming and will be for generic devices that don't have a more specialized UI.

What I'd like to do with buttons is look at what commands it supports. I've seen several examples of button devices - from a single button to multiple buttons in 1 device. The sample button JSON I'm looking at has 1 button with 3 commands: "doubleTap", "hold", "push". I can send the 'push' command if the button is pressed on the dashboard.. that would make sense. I could also handle a double-tap and send 'doubleTap' command. The hold command might be tricky though because press and hold brings up the device options today.

Anyway, that could work for a single button but for devices with more than 1 button I'd probably bring up a specialized button dialog that lets you select which button you want to send the command for.. something like this: 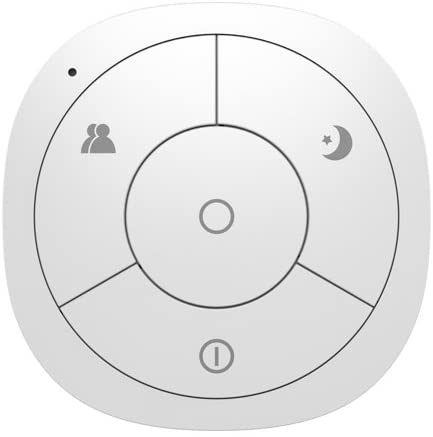 Where is the Cloud mode toggle? 1.0.317. I don't see it in settings. I want to use it on my Chromebook when connected to my phone hot spot or another non-local network. I can successfully connect to the maker cloud url. Will there be a a way to increase the text font size.

Where is the Cloud mode toggle?