I haven't even gotten to the app... Was just testing the driver. I installed one driver for each of my two Nest Hub/Nest Hub Max devices. Was that wrong?

Since all I want is for it to open my dashboard main menu, I was thinking I may be able to just use the driver, add it (or a virtual switch) to Google Home integration, then when I want the dashboard on the Hub I would just tell google to turn on X device (thus turning ON the driver, and getting the default URL - my dashboard).

I haven't installed the app,. so not sure what all I can do there yet.

That's exactly what I do but with the app.

But am I nuts, or wouldn't you need multiple drivers if you have multiple Nest Hubs?

EDIT: Also, good to know on the app. I'm going to install it now and poke around there.

wouldn't you need multiple drivers if you have multiple Nest Hubs?

Nope, app takes care of that... send the command to just one or to many at the same time. 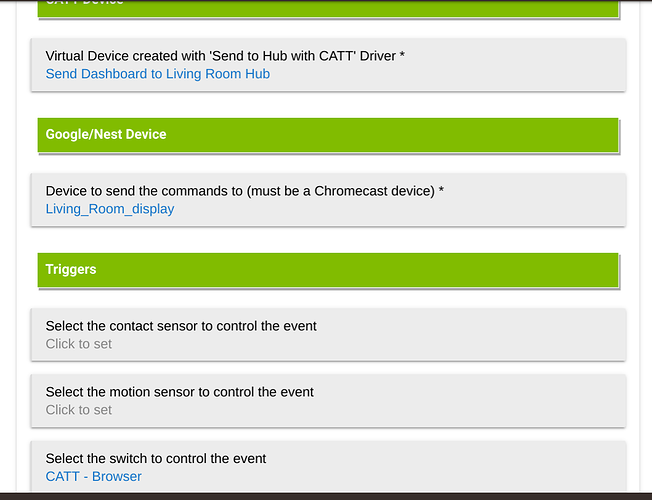 But that is only if you already have the chromecast added to Hubitat. I don't have any of my chromecast in Hubitat, so no devices to use as the source to send to the Send to Hub with CATT driver.

I removed the chromecast integration a while back due to hub lockups.

I get why I was confused now. So I won't be able to use the app at all in my scenario, and have to do it by hand - no worries!

Last annoying question for the day... Does the driver ever reconnect if you reboot the CATT server? I ask because I just did, and my drivers are both at "Disconnected" for a few minutes now.

If I go an save preferences it reconnects, but seems like it should retry on its own at some point (if it doesn't already).

Does the driver ever reconnect if you reboot the CATT server?

it 'should' but it won't try until it has to send a command.

Hmm... I tried hitting ON/OFF a bunch of times before I gave up and re-saved preferences. Never budged off of disconnected.

I see in the driver where telnetStatus should try once a minute... But I'm not well versed in telnet driver commands, so no idea what triggers that to run in the first place.

EDIT: The app and driver are really cool (especially the app), but I decided to go another route. Since I already have a websocket connection to Node-Red and my CATT needs are simple, I decided to just make a virtual switch in HE and then have Node-Red do the CATT triggering part. The other side benefit was that it can do it via SSH instead of telnet (although it is annoying to setup SSH in Node-Red).

@bptworld I finally got around to setting this up and I must say this is pretty cool. The only thing I would love to know is it possible to re-configure slightly to inject username and password for Sharptools.io. I can get to the site but I then need to input my password on my Google Home which I cannot, if that can be added to the driver that would be great. Any thoughts?

The only thing I would love to know is it possible to re-configure slightly to inject username and password for Sharptools.io.

I wouldn't know where to start with that. Maybe @josh could take a look at the code and make it compatible with Sharptools. I'm always open to pull requests.

OK no worries thanks mate. You are right @josh is usually a gun in this space so I am sure he will have a fix.

I can get to the site but I then need to input my password on my Google Home which I cannot, if that can be added to the driver that would be great. Any thoughts?

Is touch input not enabled? IIRC, the Home Assistant guys did something similar and they had to make some tweaks to trick the Google Cast receiver into enabling touch controls.

That's correct it wouldn't accept touch for me to even try and enter the details. Do you have a link to that discussion and I will see if I can get that working.

It was in their blog post from a few months back. 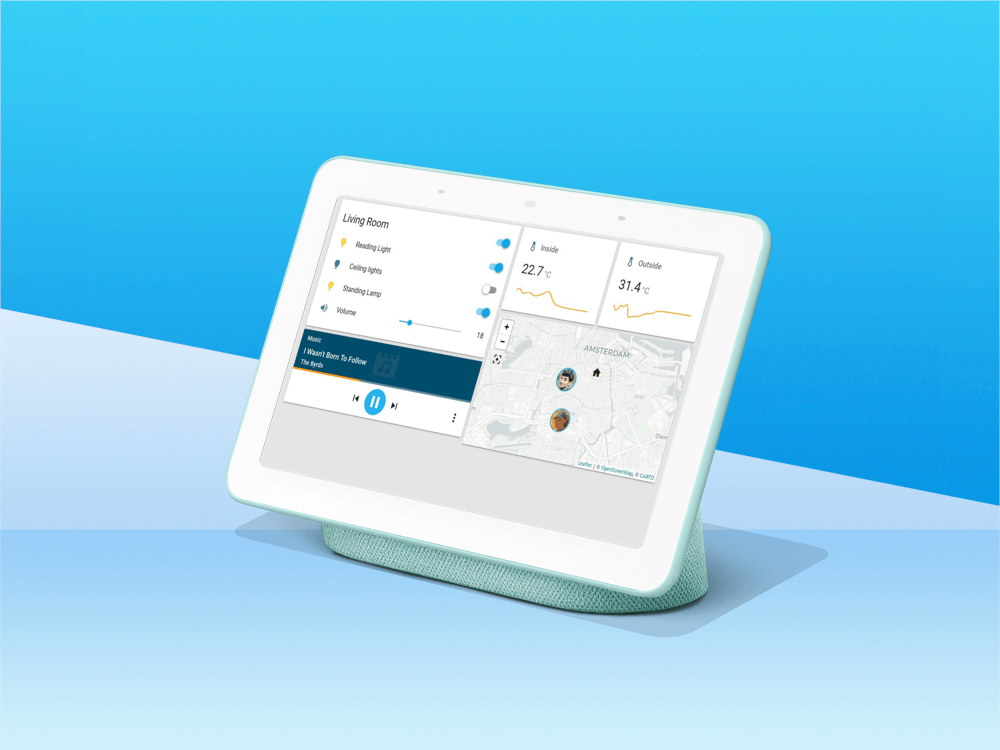 Show Home Assistant on a Chromecast or Google Assistant device with screen.

I haven't had a chance to look into it in detail, but it looks like the Cast API has an option for indicating that the app is touch enabled, but that wasn't working for them so they ended up adding a bit of a hack on the 'receiver app' to get it to break free.

Thanks @josh. Maybe @bptworld can write that into his app so it can initialise on request.

I'm trying to squeeze in an install of CATT tonight to play with it. Heading out of town for a few days coming up, so I might not be able to dig into it enough.

I was able to poke around with CATT and I was able to navigate around and touch things - there's just no input (eg. keyboard) to enter login details. Is that the same thing you were seeing? 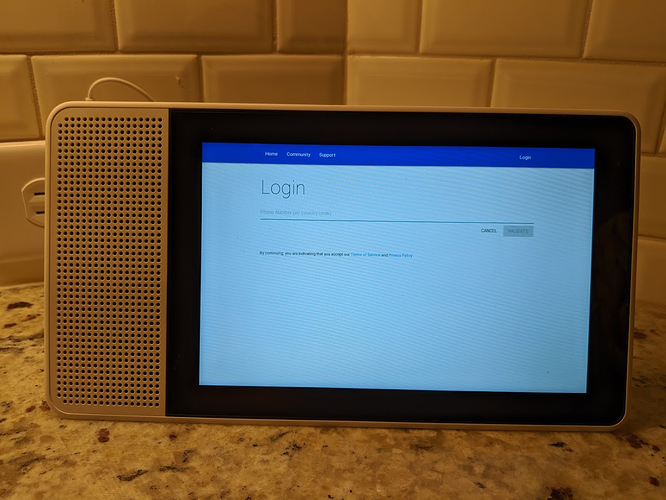 OK great. I just tried mine again and this time touch did work and I can reach the login screen to Sharptools.io like you have. I am almost positive it didn't work the other day when I tried to touch around etc. I'd imagine the fix is an update to this app / driver to injected the login details?