There are a few UK devices from AlertMe which aren't in the Iris V1 system drivers right now, so examining some code from the past and with @markus's invaluable help deciphering the data block, I present my first drivers!

There's every possibility that these will work with their Iris V1 equivalents as well, given that generation of Iris was built on the AlertMe platform.

They all have presence detection for troubleshooting and system control (using key fobs) plus a 'ranging mode' for checking link quality (LQI). While in ranging mode device LEDs will double-flash to show a good quality link, or triple flash if the LQI is poor. This measurement is transmitted back to the Hub and shown on the device page.

It's also handy if you have a pile of devices in front of you and you've forgotten which is which.

Search for "alertme" on Hubitat Package Manager (HPM v1.8.7 or later is required) or you can install manually by copy-and-pasting the RAW code into Developer Tools > Drivers Code > New Driver.

The Alarm Sensor responds when it hears other alarm sirens. It also mimics a Motion Sensor in its response, as the sound detection capability is not supported in all areas of Hubitat just yet, the driver reporting both sound and 'motion'. Presence, tamper detection, temperature and battery voltage are supported.

The Button has both "Push" and "Hold" triggers. Presence, tamper detection, temperature and battery voltage are supported.

The Fob supports both "Home" and "Away" button triggers. Presence and battery voltage are also supported. Please get in touch if you know how to trigger the confirmation sounds on this device!

The Lamp is a desktop indicator rather than a room-illuminating 'bulb', with the ability to run sequences based on RGB colours, fade duration and dwell times. The Lamp has an internal battery and should (!) act as a repeater. Presence and battery voltage are supported.

The Motion sensor supports motion detection, as you may have expected. Presence, tamper detection, temperature and battery voltage are also supported.

The Pendant is essentially a Fob running specialised firmware. It can be used as a standard one-button Fob by reassigning the Fob driver, or it can be used in the manner of a critical care pendant.

Pressing either button registers a Push event and sets the device into "Help Needed" mode, signified by a single beep and single red flash. The Pendant stays in this mode, repeating the call every 30 seconds until the hub acknowledges the request, at which point it switches to "Help Called" mode, beeping twice and flashing the LEDs red continuously. This mode cannot be exited from the Pendant.

The Push events from the "Help Needed" mode should be used to trigger some form of assistance. Once that assistance is confirmed the Pendant can be switched "on", which triggers "Help Coming" mode. This is indicated to the user by three beeps and the LEDs flashing green continuously.

The Pendant can be set back to "Idle" mode by being switched "off".

NOTE: Though you could use this driver to create a facsimile of a critical care pendant system, absolutely no guarantee of reliability or suitability is given or implied.

The Power Clamp is a device for measuring power usage on an AC circuit, using a small clamp which attaches around an incoming domestic live cable. Power usage in Watts, power summary in Kilowatt-hours, tamper, battery voltage and percentage, temperature and device uptime are all supported.

The Smart Plug is a sophisticated remote-control power monitoring passthrough. We support relay on and off, power usage in Watts, power summary in Kilowatt-hours, battery presence, voltage, percentage and charging state, supply presence and state mismatch (for warning when there is load demand but the supply has failed). These outlets also act as repeaters on mains and battery power, so their feature set is pretty much the best I've ever found.

If your smart plugs power down when unplugged from the supply, their internal rechargeable batteries have expired. Here's how to replace them, after which they'll run for ages with mains power off. 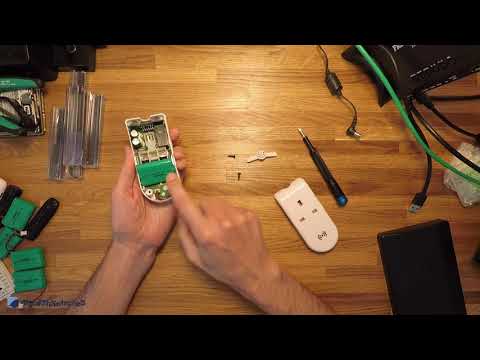 There are no doubt errors and omissions, pull requests are gratefully received!

If you do end up using these, please post here to let me know, always good to hear that someone's finding such things useful.

I can confirm the Smart Plug driver does in fact work with the Iris V1 plugs and adds energy as an attribute. Nice work!

Brilliant! I'd always suspected it might work but had never had it confirmed, thank you!

Is there a model number on the Iris V1 plug? In the UK they're SPG100, or SPG900 for the identical last run that British Gas made (they sold them as repeaters only with no remote control so as to not dilute sales of their revised model).

This is great. I love using old devices with my Hubitat. Can you please also add the model numbers for devices which are intended to be used with these drivers? For someone looking to use one of these devices, it might help the search engines find this if you post model numbers for each of the compatible devices. I’ll probably also take them and hunt on eBay.

For someone looking to use one of these devices, it might help the search engines find this if you post model numbers for each of the compatible devices.

Would be happy to, the trick has been that I have no idea how many of these drivers work with the US equipment made by AlertMe, so if anyone out there would like to try their Iris V1 gear with these drivers and report back I'd be more than happy to include model numbers.

In the UK these devices were so early in the Zigbee world that they often don't have a model number, even on the circuit boards. For example, this sensor is just called WINDOW/DOOR REV-1-2. They don't even use the normal Zigbee cluster spec because I'm not sure it had been written at that point, which is why Hubitat has the special Iris V1 join mode (and why I'm here at all!). 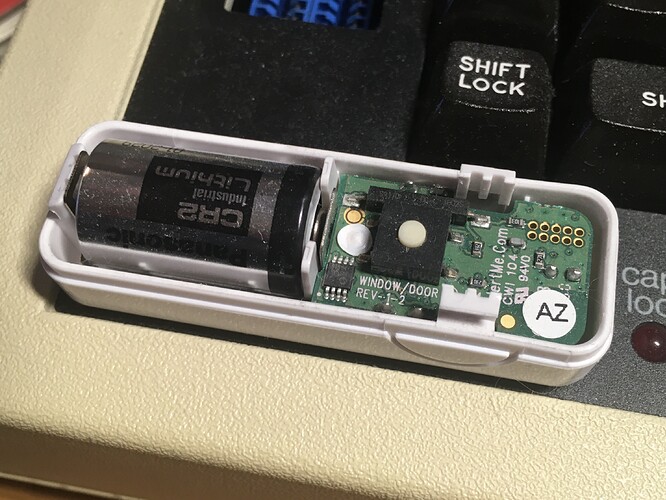 What gets me about all the AlertMe gear, certainly the UK stuff I have here, is just how small and well designed it all is. I've been privileged enough to chat over email with the original designer a couple of times; these all pack a big CR2 cell and maintain their small size by having the tiniest of electronics.

Plus every one of my devices still work perfectly after nearly 12 years of use - the plastics haven't even yellowed. I was lucky enough to be donated some devices which have yellowed, but most of that had lived in direct sunlight for 8 years or so.

If this works out I have hundreds of brand new never paired V1 smart plugs, smart buttons and motions. I also have a few dozen of brand new contacts but I'm going to hang on to these. I also have probably a hundred or more used of the above that I would consider selling on the cheap. They make great temp sensors.

I've got allot on my plate for the next few days but when I get a minute I'll test the AlertMe drivers on the balance of the V1 devices and report back.

If this works out I have hundreds of brand new never paired V1 smart plugs, smart buttons and motions.

Wowsers, if that's the case I'd be interested in some buttons and motion sensors, they're my most used devices. One or two of the SPG800s would be great as well, just so I can go through the driver code and check their behaviour in person - if you'd be willing to ship to the UK of course, and if I'm reading it right that you'd be interested in selling some of the devices.

Drop me a PM when you get chance, absolutely no rush.

I'm looking at an IRIS V1 contact sensor like the one pictured above. On the circuit board, it has the same markings, "WINDOW/DOOR REV-1-2. On mine, there is also b4 and a sticker 52W12. On the cover/back there is another sticker. On it is "Contact Sensor," "Model Number DWS800," FCC ID WJHWD11," and "Made in China."

I agree that these have been very reliable. I have some V2 contact sensors and they are also good. I would probably purchase more of these contact sensors if they became available at a good price. It would be nice to add them to all the windows as well as the doors.

I'm going to bet that the originals had no proper model number as such, but were back-named as '100' series devices when manufacturing for the US began. 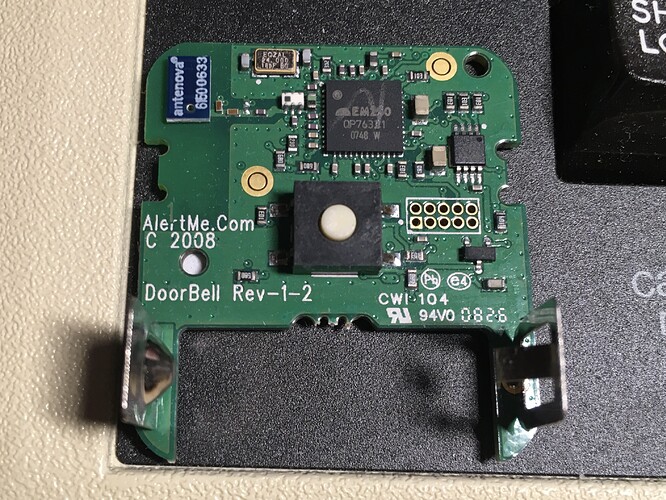 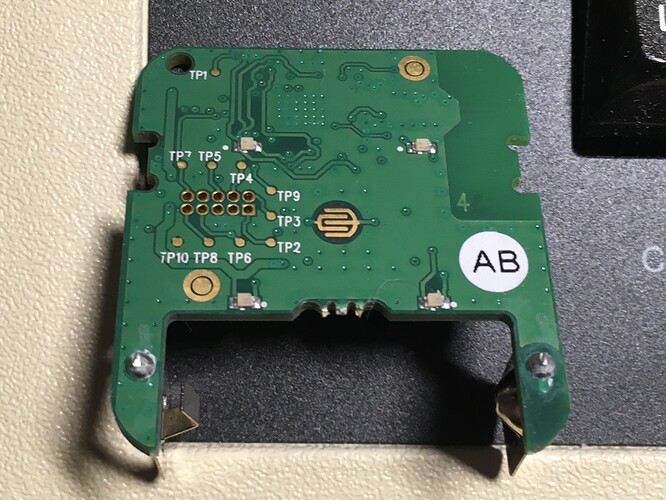 Who knows what the US model numbers are (suppose Google may well know) but we have '800' for starters and then '900' for the last manufacturing run of UK plugs done by British Gas.

In my inventory I have the following:

I have one of these Iris Power Meter devices that never got to be used. Any hope for it?

Wasn't this an Iris bridge to some utility company on the west coast somewhere? If so, I'd say it's worthless with the demise of the Iris platform.

I have a zigbee power meter and I bet this device could communicate with it. I have added a rainforest zigbee display in my house that can communicate with my meter. Just wouldn't surprise me if this wouldn't have also worked before iris croaked.

@birdslikewires So far I really like these drivers. I'm testing out the contact sensor and motion sensor ones. The temperature unfortunately is being reported in Celcius. Is there any way this could be a configurable choice to be able to select Fahrenheit?

The temperature unfortunately is being reported in Celcius. Is there any way this could be a configurable choice to be able to select Fahrenheit?

You mean the temperature is being correctly reported in Celcius, surely?

These drivers are going to get a refresh shortly, I'm just currently burning my free time on a driver for some relay modules I rely upon. If I get chance I'll throw the Fahrenheit conversion onto the contact and motion sensors before refreshing them properly. You won't need to do anything except upgrade the driver, it'll read your hub preferences and report the correct scale.

I love the AlertMe Iris v1 stuff I have. I buy more whenever I find it. I wish someone would buy the rights to make the presence fobs again. There isn't anything out there like them and lots of mine have taken a beating over the years and finally got smashed, broken or just shaken to death on key rings. But I've had them since Lowes came out with the Iris stuff.

So, here's an interesting question for y'all who know about drivers: I have an Iris Senior Pendant and was thrilled to see that Hubitat has a driver for it. I figured I could use it for presence and use it's one button to disarm HSM. And it kind of works...

Well, actually, when I selected the senior pendant driver it seemed to lock up my hub. (only tried it once though) So I switched to the Iris V1 fob driver, and now it reports presence well, but throws some sort of constant error. Even though the fob is recognized as present, and it registers the button push on the device page, it does not execute the rules that go with button push 1.

Does anyone know if there has been discussion around this device? If anyone wanted to fiddle with it, I could mail you one...