I have been confused for a while now about the update process and in particular what is documented when you either click on the red notification that tells you an update is available or you go Settings>Check for Updates. Today I realized why this documentation has confused me so much in the past. The description of changes is not complete and since there is no link to the actual release notes I have always assumed that what the hub is telling me is the purported changes to the platform that my Hubitat Elevation wants me to update to. That is an incorrect assumption.

Feel free to tell me that the assumption I made was not appropriate based on something. I'd love to hear it. But otherwise I cannot understand why the platform update process completely disregards and does not disclose all of the changes that the developers have indicated as relevant enough to post on the community forum.

I didn't do a line by line comparison but I'm sure that the platform upgrade description for the current update to 2.2.9.129 is the same as the initial release notes for platform update 2.2.9. Not the release notes and the subsequent post but just the original announcement. So why in this case are they telling me all about the updates to the platform but not the updates to the platform that my C-7 wants me to update to (e.g., 2.2.9.129 which includes the apparent release today)? For the avoidance of doubt, I did check the end of the text included on the update screen (xxx/hub/platformUpdate) and the last line says " * Chromecast reconnect and status poller tweaks." but that is not the final word on the changes to " New Version Available: 2.2.9.129" which is prominent on the update screen. 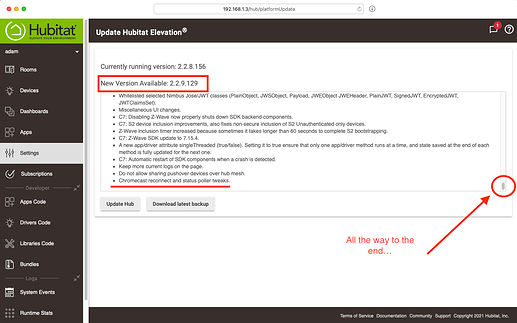 I didn't do a line by line comparison but I'm sure that the platform upgrade description for the current update to 2.2.9.129 is the same as the initial release notes for platform update 2.2.9. Not the release notes and the subsequent post but just the original announcement. So why in this case are they telling me all about the updates to the platform but not the updates to the platform that my C-7 wants me to update to (e.g., 2.2.9.129 which includes the apparent release today)?

The individual hot fix release notes are shown here in the community.

We will endeavor to do a better job at ensuring the main release notes reflect everything. For example, there was a new app feature in 2.2.9.129 that was not mentioned in the 2.2.9.128 release notes, and it should have been. But the bug fixes in 2.2.9 would not make it into those notes, because those fixes are specific to a hub already updated to 2.2.9.128, not one updating from 2.2.8 as you show above.

We could always do a better job at documentation and release notes. BTW. your screenshot does show the complete release notes for 2.2.9, not an abbreviation.

Thank you. I appreciate your response and acknowledgement.

I'm not completely sure that my concern was fully addressed though. My concern is that the changes to 2.2.9.129 that are announced in post two of the release notes announcement are not included in the platform update description that my hub showed me. I understand that my hub was not on the most current version prior to the release of 2.2.9.129 and I know that it would be impracticable to attempt to note all changes from one hub's particular platform version to the latest platform update that a hub is attempting to update to.

It is the above to which I am referring.

BTW. your screenshot does show the complete release notes for 2.2.9, not an abbreviation.

I have gone back and looked at the platform update description that my hub is giving me relative to upgrading to version 2.2.9.129 and none of the items quoted above are included in that description. Again, this might be a common practice amongst the developer community or even wider than that but I am not of that world so if such is the case I would appreciate if the platform update description that the hub provides explicitly notes that the description provided is not purported to include changes that were relevant enough to be described in a subsequent post to the release notes on this forum. I get that hot fixes for bugs or any other update that isn't specifically called to users' attention in the forum are not as relevant to some or most users. But if the updates make the forum then they seem relevant enough that someone thought it necessary to list them so that is where my concern remains.

Was this an accidental oversight or is it a common practice of which I am not aware?

none of the items quoted above are included in that description

So this is not an accidental oversight. And further to that, we do not generally update the release notes visible on the update page to include hot fixes, again, because the lion's share of hot fixes pertain to things since the primary release, not since the prior release (2.2.8).

Beyond all of this, we do our best at the release notes, but this is a large platform with a lot of moving parts. There will always be changes made that don't rise to the release notes. And there will alway be omissions and mistakes. Your use of the word 'disclosure' is troubling. We are not 'disclosing' anything for which a 'failure to disclose' should be a problem. Your emphasis in your two posts suggest that you are putting way too much weight on the accuracy and content of release notes.

It’s very easy to setup email notifications when the forum sub-category dedicated to firmware releases gets a new post. That would allow you to stay up to date on the changes associated with each individual hotfix.

I subscribe to the announcements and release notes categories. This way I get an email and alert in Discourse when a new post is made in these employee only categories. [image]

I couldn't care less what the changes are personally. I assume they know their product and update what needs to be updated. Windows or Android or anything else generally don't tell me much about their updates. Lifes too long to sweat the small stuff. Go with the flow and everything will probably hopefully more than likely be just fine.