Performance with Lots of Devices

I am continuing to build out my setup with mostly Z-Wave devices, but I have now noticed that things get quite slow and I am wondering whether that is down to the number of devices I added. (I now have 52 decides total, so not a huge list, but it is bigger than it once was. It's mostly light switches, outlets, temperature sensors).

Often, when I try to control a switch through a dashboard, it takes 30 seconds to react. Similarly, the status of the devices (like whether a switch is on or off) takes a long time to display right, or sometimes doesn't display right anymore. Also, I noticed that some of the rules I have set up do not seem to reliably switch lights on and off anymore.

Is there a specific limit for number of devices I should be aware of? Is anyone else having the same problem?

Can you share a screen capture of your Z-Wave Details? Do you have any devices in that list that have a blank route? Often, issues like yours are due to one or many ghost devices generated during inclusion.

There is a theoretical limit of something like 250 devices, but in reality I don't think that would be a best practice to get close to that.

At 52 devices, you shouldn't be having issues. I have more than that and zero delays or slowdowns.

As mentioned above, please post a screenshot of your Z-wave details. It will help us to see if there is some common issues.

Do you have the latest Hubitat firmware installed?

I do indeed have one device with an empty route. It's a real device though. But it is also one that seems to respond slowly. I should also add that it is a device that is physically relatively far from other devices, since it is in the back yard (although I have 2 that are further away, and they have no problem).

I am curious: What would cause a route to all of a sudden be empty, even though there were no changes to the setup (I haven't added devices in a while when this problem started)?

I have tried to repair the device, but it doesn't seem to be responding. Which is strange, because it does function most of the time (although often very slowly).

I don't see anything unusual in the logs, other than when I just ran the repair attempt. Doing that, I got some warnings about the network being unresponsive.

As far as the stats go: I have a Z-Wave poller running, and that is the only thing that stands out as busy. Second is a motion detector in a busy area, so that gets tripped a lot, but that is to be expected. So, nothing real unusual there.

Thanks for you responses!

Doing that, I got some warnings about the network being unresponsive.

Please post screenshots of your Z-wave details page. Include all the columns so we can analyze the data.

I do indeed have one device with an empty route. It's a real device though. But it is also one that seems to respond slowly.

That is likely either a ghost node, or one with such a weak signal that it is causing mesh issues. Distance is sorta irrelevant, you can have a weak signal and it is sitting across the room from the hub yet another device with a strong signal might be across the house and be fine. Again, your Z-wave details screenshot would be helpful.

The device in question is a switchable outlet (one that you plug in on a short cable... NOT one that is built into a wall box). 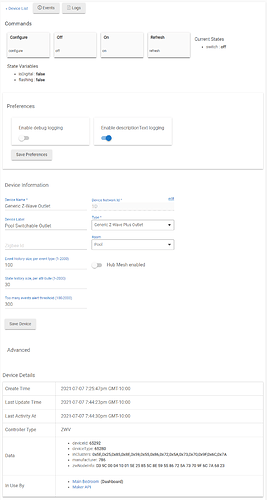 This, in itself, is a little odd. The list of where it is in-use is incorrect. Also it shows its current state as off, which is also wrong (it is currently on).

Can you please show us your Z-Wave list after that one? It's likely that one of the next devices in the list is actually the outlet and what you posted is the ghost.

Note: I force-removed the device. Now, I have this entry in my z-wave details:

More specifically, do you have the latest "Z-Wave" interface firmware installed.

This is installed separately from the main Hubitat Hub firmware and is easily overlooked. Check your "Settings" -> "Z-Wave Details" page and see if there is a button to update the firmware. IF there is no firmware update button, then you have the latest.

I used to have the problem you described, but it decreased substantially by updating the Z-wave interface firmware.

Note that sometimes it takes more than one attempt to get this firmware to install. I've found it installs most reliably after a Hub power down / unplug for a moment / reboot.

Note: I force-removed the device. Now, I have this entry in my z-wave details:

You should have excluded it. At this point turn that switch off (actually disconnect power to it) then reboot the hub via power cycle (shut it down and unplug it at the wall (not the hub) for 5 mins and power back up. Cilck refresh on the line then when it comes up click remove.,

Next can you post your ENTIRE z-wave table so we can look at the rest of it? These partial shots aren't helping us help you.