I'm a long time home automation user starting with X10 stuff back in the day to my present pretty complicated ecosystem driven mostly by Homeseer. For multiple reasons I am moving away from all the custom and complicated to a simpler hopefully more robust (tired of app crashes and reboots) platform. Just ordered my controller and hope to play with it this weekend. Currently I have about 100 Zwave devices, RS232 stuff, IR, DSC security interfaced, garage doors, alexa, etc etc etc. Wish me luck!

Welcome to Hubitat, and good luck!

Before you add a single device, update the z-wave radio firmware. Register your hub, and then go to:

If there is no update button, then the update has already been applied.

The improvement in z-wave experience is quite dramatic!

1: If at any time you have a failed z-wave pairing, STOP. Power down the device, then check your z-wave details page for ghosts (these will have nothing in the routing column) These need to be removed before continuing. Power up and factory reset the device and attempt pairing again.

4: Do not pair Hue bulbs (or any other zll based bulbs like cree etc) to hubitat if you have other zigbee sensors. Zll bulbs make very bad repeaters/messengers. The should be isolated on a seperate hub. Either a Hue bridge or another hubitat (then use hub mesh to control). The exception to this is Sengled bulbs (they do not repeat) or zigbee 3.0 bulbs. Though at this stage of the game, Lifx bulbs are superior in every way in terms of speed, color acuracy, and brightness.

5: We're all here to help. Never fear asking questions. It's a great community.

Welcome to the Hubitat forums!

My general advice is to start slow, and use the least complicated app for the job. There is Rule Machine which everyone seems eager to try out at first. It is a very powerful and complicated way to do things and probably the wrong way to begin. Instead try Basic Rules app, Simple Automations, or for a more intermediate solution Motion Lighting app.

Their Youtube channel has many good videos, and in particular there is a fairly recent one that is very relevant to your situation. 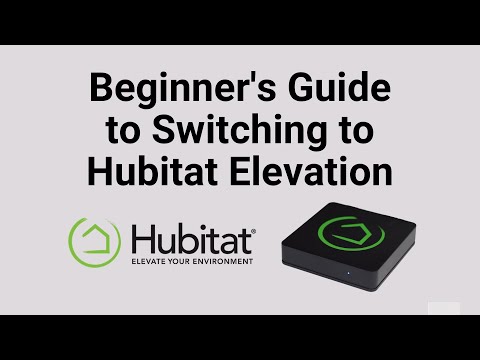 Good luck, and don't hesitate to visit the forums if you have any questions at all.

Welcome. Like you, I got started with Homeseer back in the X10 days. I kept a Pi version running until a couple of years ago for a few things, even though I had switched to Insteon and the ISY for a couple of houses, and then Z-wave with ISY as the initial system in the current home property, before switching to Hubitat going on two years ago. Very happy with it! As others have said, don't try to move everything over all at once, in a weekend binge. More than other systems, I find letting the z-wave system figure things out slowly works well with Hubitat, as routes get figured out by the z-wave radio.

As for Rule Manager, it's not nearly as intuitive as Homeseer Events, but it is very powerful once you understand it. Just expect to experience a bit of a learning curve as that happens (another good reason to go slow on the switchover).

As for reboots, I have four hubs across four buildings (two properties) and in two years, I think I might have felt the need to do a reboot once in each of two hubs, and one of those was probably unnecessary. Only once has a hub just "locked up" and that seemed to be caused by a bad z-wave device that was spewing out traffic. When I left the ISY community (in a bit of a disgusted huff at the company and forum, not the device itself), I was afraid I'd miss the ISY's reliability, which was great. That hasn't happened at all! Hubitat has been rock solid for me, with not even a fraction of the reboots and problems I had with Homeseer. It seems to be on par with the ISY, which is saying a lot.

Finally, the community here is very helpful and reminds me of the old Homeseer forum of maybe the 2005-ish era in terms of helpfulness (really good). Dramatically better than the fan boy attitude one finds on many of these forums, although there's a little bit of that creeping in as the user base grows. Overall, I'm extremely happy that I made the switch, and hope you are, as well.

I became very frustrated early on and most of my frustration stemmed from Z-Wave issues. There have been some significant updates as mentioned above so really do that first.

I remember you on the HS forum! I'm thymer over there. I not a coder so a little concerned about the rule manager but will figure it out. I've gotten to the stage in life where I'm not spending as much time adding and just trying to keep things stable and working. I'm not running speaker cable to all the rooms in the new house, going to lean on Alexa devices for that. Also not running hard cabled motion sensors for room occupancy this time as I have better luck these days with zwave battery devices. Super interested to see what Zigbee offers vs. Zwave too!

I not a coder so a little concerned about the rule manager but will figure it out. I'

That is why you should start with the simpler and more user friendly Basic Rules app. For most purposes, you don't need the more complicated Rule Machine.

Super interested to see what Zigbee offers vs. Zwave too!

My general advice is to use Zigbee for sensors, and Zwave for switches.

It is fine to mix and match protocols, I would not stick to just any one thing. The only thing that you have to worry about is having enough of each protocol to have a good mesh.

Welcome. Many folks have already given great advice. Keep in mind not all of your devices will connect directly to HE without some add-ons.
Z-wave- mostly fine, check the compatible devices wiki
RS-232-there are community created add-ons that can bring in serial devices, one is "hubduino"
IR- broadlink add-on or Remotec makes a z-wave to IR device

If you want the absolute broadest support, spin up HA on a Pi and use the community integration. Not necessary at all, but who the hell cares about necessity, it's about the tinkering (and driving my wife nuts)

I predict you're gonna love it here.

I find that Zigbee sensors are worth a try, but they do tend to drop off the network. I currently use them only in one building/hub, and to be fair the distance may be too great. I'll buy a couple of repeaters (maybe the Ikea ones) and give those a try to see if they help. The lack of Zigbee switches and such to serve as repeaters in that building can't be helping things. Personally, I haven't found zigbee switches that thrill me. I also use Z-wave repeaters (Aeotec 6 series and more recently Ring) in two buildings and that has given me an amazingly solid z-wave system. In the building with the Zigbee sensors I use Lutron Caseta with a Lutron Pro hub tied into the Hubitat hub, which is likely what I'll use going forward, everywhere, simply because it's so reliable. I really like being able to mix and match signalling platforms with Hubitat, just as one could do with Homeseer.

As I thought about it, the only thing two things I miss from Homeseer are 1) their Events engine, which I still think is the best and most intuitive in the industry, and far simpler than Rule Manager for Hubitat while being just as powerful. And 2) the Homeseer plugin "library", that allows one to search for, and often try for free, a plugin that serves some particular purpose. I really dislike having to find apps/drivers for Hubitat via Github. Hubitat Package Manager helps a lot, but many drivers aren't available through it. Still, once you do find, install, and configure apps/drivers and get your system set up, the stability of Hubitat is dramatically better than Homeseer, in my experience. I just find that I don't "fiddle" with the system as often simply because doing so isn't as easy. Them again, I don't have to!

I have found using a companion server running Node-RED (actually right now testing Home Assistant with the Node-RED addon) to be a great front end rules controller for HE. Node-RED is a visual flow based system that makes it easy to incorporate lots of things not necessarily HE related. Very powerful and helps reduce overhead on my HE hubs themselves (I have 3). The visual "style" is not for everyone though..

Have you looked at the built in basic rules and simple motion and lighting apps? You can do 99% of what you want in those.