Moving on From Wink 2 to Smaller and Better Hubitat

Wink is just not getting enough attention by their own company and I am fed up with their whatever it is that is going on. Was debating hard between SmartThings and Hubitat and finally came to the conclusion that Hubitat is the future. Fortunately, I am decently tech savvy but I got lazy through the easy and relied on my Wink hub which is just few tap/click away from adding devices. Moved into a new house and had to leave all my Caseta switches when old house was sold unfortunately. I am thinking to start over fresh again. I currently only have 4 ecobees configured into 4 different zones, myQ garage door opener, and Schlage Connect for front door and back door. I am looking for suggestion for some custom apps for each one of these current devices that I have if there are any and also what should be something next for me to get? Thank everyone in advance!!

I currently only have 4 ecobees configured into 4 different zones, myQ garage door opener, and Schlage Connect for front door and back door.

For the ecobee thermostats, I'd recommend Universal ecobee suite from @storageanarchy. Here's the announcement from him on community.hubitat.com. I find it to be considerably more versatile than the built-in ecobee app.

For the Schlage locks, I'd recommend using the built-in app Lock Code Manager. I'd also recommend that you have a few z-wave+ range extenders around your house. It will make your z-wave devices, but especially Schlage locks, work much better with Hubitat. There are numerous threads on community.hubitat.com where @waynespringer79, myself and others have commented on the dramatic difference range extenders have made to our z-wave locks with Hubitat.

For the MyQ, there are several integrations. Here's one that I use.

If you get Caseta dimmers/switches, you will need to get a Caseta Pro Bridge 2 (L-BDGPRO2-WH) for them to work with Hubitat.

Welcome! I am going thru similar process you are, trying to switch over from 2 Wink hub 2s. Finding it somewhat challenging. Say goodbye to the nice Wink color wheel for lights. This was most disappointing for me. Anyway, check out DIY Smarthome guy on YouTube. Excellent videos for Hubitat. Including Schlage locks. Good luck! Know I'm going to need it!

I came from Wink as well. Things work much differently in Hubitat than in Wink. For example, with Wink you didn't have to pick a driver, there was no dashboard to build, you couldn't install user apps, and the "robots" are very crude compared to Hubitat's Rule Machine. I think it is normal to feel a bit disoriented at first when making such a radical change, I know I did.

There are lots of ways to handle things in Hubitat, which is one of the hard parts. I didn't initially use Lock Code Manager, for example. I simply excluded the locks from Wink, paired them with Hubitat, and they worked. I couldn't manage the codes in Hubitat until I deleted and re-added the codes, so eventually I did that and added Lock Code Manager at that time.

Same for other things like motion activated lighting. You could do that through Motion Lighting (built in app), using Rule Machine, or via a user added app someone wrote (I have seen at least a couple user apps for this).

My advice is to try things one way, and if it doesn't work or doesn't make sense try a different app. Go slow, and don't try to do too much at a time. I have had Hubitat since early April, and it probably took a good week of work to have a grasp on how to add devices, make a dashboard, add user apps/drivers and a few other rudimentary things. It took maybe close to a month to really know my way around things and be comfortable with how most everything works. I am just now diving into deeper automations and trying to learn and understand Rule Machine.

Of course you can always post on here and someone will help. You will love Hubitat compared to how Wink worked.

I rely on Leviton Outlets, Dimmers, and Switches as Z-Wave repeaters. If you like simple Decora style devices they're great. I have one in almost every room of my house. Devices like locks and motion sensors are rock solid on my mesh. They also install fine in outside enclosures to run Holiday lights and my pool light.

Any recommendations for the z-wave extenders?

If I use Leviton products and they act as repeaters, would I still need extenders?

This just came to my mind, but how does Hubitat handle multiple users? We currently have 6 people in our house and how would the away and home mode work with that? Thanks again!!

If I use Leviton products and they act as repeaters, would I still need extenders?

I believe I've read on here that people using Leviton mains powered devices do have similar positive results as those of us using the Aeotecs......you will just need to check and make sure those devices support "beaming" that seems to be the main need.

We currently have 6 people in our house and how would the away and home mode work with that?

In the portal.hubtat.com click on the hub you are linking, you will have each user create their own account 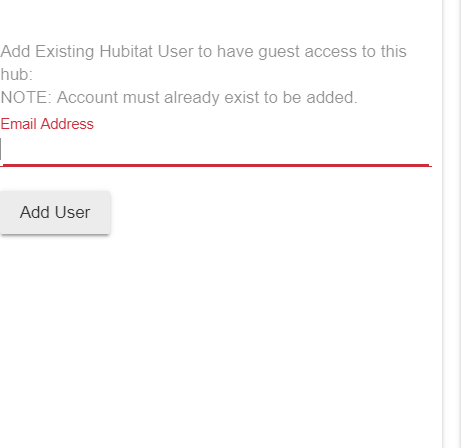 and then link their accounts to the hub you want to control with their home/away/etc.

Each powered device will repeat, as you spread them around your property you're extending the range of your z-wave mesh. The nice thing about Z-Wave is you can pair anywhere in range of the mesh. You don't have to put them in range of the hub, which is important when installing wired switches and plugs.

The topics of presence and modes is an entirely different topic. There are many ways to manage them both. I'm probably not the guy to advise on either. I don't use an away mode.

Each powered device will repeat, as you spread them around your property you're extending the range of your z-wave mesh.

This is true, however the zwave signal in the C-5 hubs is significantly weaker compared to that of most platforms they are migrating from, with securely paired devices (locks/garage doors) MANY users have numerous issues when trying to pair these devices no matter how many "repeaters" they have. As those "typical" repeaters are repeating the weaker signal and is only really noticeable on those devices I mentioned above as numerous dropped communication issues occur.

The devices recommended to @b00st4ddicted not only repeat the signal but they also AMPLIFY the signal thereby eliminating the dropped communication issues, and AMPLIFYING your overall zwave mesh signal and range

You guys are all awesome for the detailed replies. I forgot to mention that I have Ring Alarm and Ring Doorbell Pro. Are these native for Hubitat? If not, it's not a big deal, Ring app is pretty well made and I am ok with using it, but how about the door contact sensor from Ring Alarm? Can these be integrated into Hubitat? Thanks!

They are not "native", I don't have them but search the forum for them users may/may not have gotten them to work.

The topics of presence and modes is an entirely different topic. There are many ways to manage them both. I'm probably not the guy to advise on either. I don't use an away mode.

I don't use home/away modes either. This is the one big problem yet to be solved in the home automation space. If you rely on phone presence, there are lots of things that can and do go wrong. Other solutions are lacking.

The Hubitat app works OK for presence, with the limitations listed above. I used a combined presence app that like the name implies, takes GPS and WiFi and "adds them up" to try and deduce if someone is home.

I second this recommendation.

P.S. I moved here from Wink.

Great explanation of why home/away modes are not a good idea!! I tried geofencing and reply on phone several different times and none of those times are accurate at all! The combined presence app, is that the actual name of the app?

The combined presence app, is that the actual name of the app?

There are three combined presence apps I am aware of. There are probably more if you dig around on the forum.

They all have differences and I ended up trying all 3 of these. They all worked fine, but the jwetzel version fit my needs the best.

Thanks for the suggestion! Is this with the paid plan or the free plan?

I use the free one