I'm just looking for some advice here for motion-based lighting controls for my basement man cave. I just got a motion sensor and started out with a set of manual Rule Machine rules, but just jumped into the Motion and Mode Lighting app since it seems like it may have the functionality I'm looking for.

So here's the situation:

I have a Lutron RR2 system that controls various switches, dimmers, and scenes in my basement. I put the motion sensor where it observes the entrance to the basement (stair landing).

What I want to do:

I've got the first part (turning on lights and off again with no motion) but I'm a bit stumped on what to do next to get the override working for scenes and the "exit room" scenario. It seems like the options in the app should allow me to do it, but not really sure of the best approach.

There are certainly multiple different ways to do this. I am a big fan of RM, so what I would do is create a rule that, when the button is pressed, it would pause the rule that is triggered by the sensor. I know this works for other RM rules, simple lighting and such. Not sure about Motion lighting. A wait for a few minutes could be setup to then activate the rule again.

Thanks. I'll play around with that. That's essentially what I had set up in my first RM-only implementation. I'll see if I can get an RM-based timer delay to work with the Motion app.

I am a big fan of Rule Machine, but an even bigger fan of overly simplifying things where possible

UNLESS a scene is activated

You can accomplish this in Motion Lighting by using "Switch to disable turning off" under "Options for Additional Sensors, Lights-Off and Off". Select the scene from the menu (or use a variable/virtual switch).

If "Basement Off" button is selected on keypad, turn off lights and disable motion sensing activation for x minutes to allow someone to exit the room without turning back on the lights by activating the sensor.

I would do this in a separate rule (Basic Rule) to turn off the light with delay long enough to avoid the motion sensor retriggering.

I think this is exactly what I need. Thanks @Sebastien and @bobbyD for the advice.

I currently have two RM rules: one for disabling on scene selection and one for setting a delay to exit the room. This seems to work reasonably well, but I'm going to try using the Motion Lighting built-in feature as suggested, @Sebastien.

I'll report back once I've tested everything.

You can accomplish this in Motion Lighting by using "Switch to disable turning off" under "Options for Additional Sensors, Lights-Off and Off". Select the scene from the menu (or use a variable/virtual switch).

It looks like I found a couple of gotchas with this one:

At any rate, I think I've got it working reasonably well now in conjunction with the two RM rules - one to delay activation on exiting the room and one to pause motion light activation when a scene is set. I just need to play around with it some more to dial it in, I think.

One quirk I've noticed: when I turn off all lights manually (and trigger the auto-delay) and then reenter the room after the delay has expired (and rule reactivated), it doesn't seem to fire right away. But if the sensor shows inactivity, then activity again after that, it will trigger. A bit odd. I need to do a bit more testing on this. Otherwise, it works pretty well.

My two "helper" rules are below if interested. There's probably a more efficient way to do this, but I've only recently started tapping into the power of RM... and I'm already up to 26 rules! 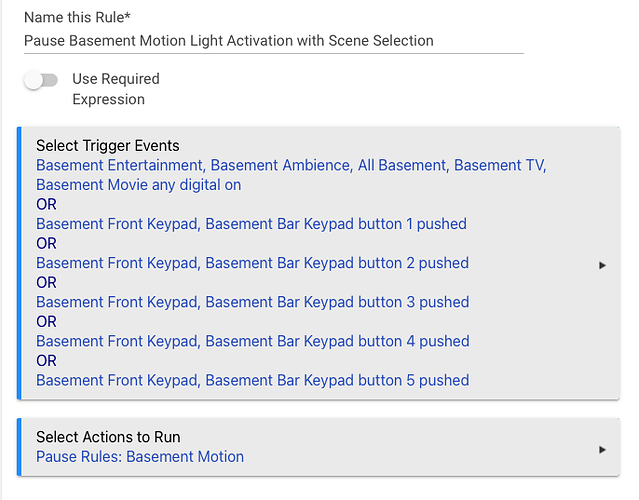 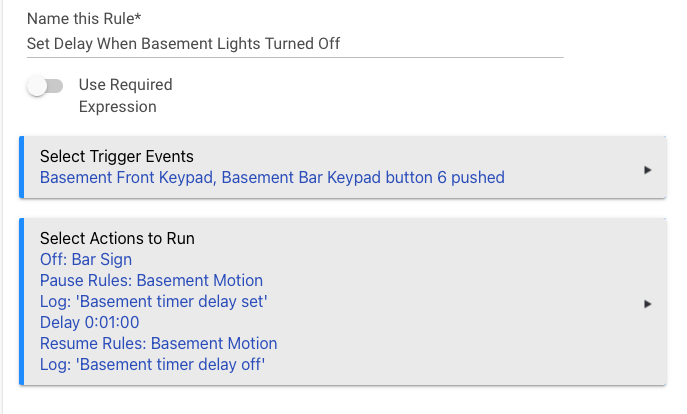 But if the sensor shows inactivity, then activity again after that, it will trigger.

That is the way it works unfortunately, as it is unable to recognize the motion until it first becomes inactive.

I would recommend changing the “Set Delay When Basement Lights Turned Off”’s 1 minute delay to a 1 minute wait. A delay will continue no matter what where a wait will cancel the rest of the rule if it is run a second time. So if you press the button twice, it will resume the rule twice. Should be okay in this case, but in others, it can have unintended consequences…