With years, I managed to use a lot of modbus devices (RTU & TCP), mostly controlled by 2 industrial plc's (Semaphore) and other slaves/masters.
I'm kind of an old fashioned guy, so don't really like my home controlled through cloud and/or voice assistants (you know them all for sure). my setting is principally wired. I'm really not into jabbering to my lights...
I just purchased Hubitat (not yet received...) because I purchased some Lutron Caseta switches and hub and I saw some reviews saying that Hubitat and Lutron Caseta can work together.

I don't need obligatory to control (all) my modbus devices with Hubitat but this solution could be nice. I tested a lot of software solutions (Jeedom, Homeseer, etc) to integrate modbus devices but I want also to separate security functions, control functions (solar, geothermal, electricity metering) and living functions (lights, music, confort) without going absolutely all-in-one.

So my question: do you have in your working boxes a (future) modbus driver able to connect modbus devices to Hubitat ? If not, is it possible to build it without going crazy ? Is It feasible on our side (what kind of programming) ? Or should I just stick on my Lutron and some Z-wave units ?

I know that modbus is not really security-minded, but I think that a wired modbus ring running into a local (separated) network is probably safer than any wireless connected cloud device. I'm maybe mistaken but I don't think that a random guy will go into my garden to cut some wires and wireshark a man-In-the-middle attack to my modbus devices... A unknown attacker from a far country will probably try to attack poorly protected IOT cams through internet (remember Mirai). Am I wrong ?

Last but not least, excuse my broken english, I'm mostly french speaking.
Btw, I'm an IT guy, so feel free to talk technical with me.
Mike

I just purchased Hubitat (not yet received...) because I purchased some Lutron Caseta switches and hub and I saw some reviews saying that Hubitat and Lutron Caseta can work together.

FYI, you will need the Lutron Caseta Bridge Pro (L-BDGPRO2-WH) to use Caseta dimmers/switches with Hubitat.

I know nothing of modbus integration, so I can't address that, but there are plenty of more knowledgeable people here who can. I just wanted to clarify what you'll need to use your Caseta dimmers with Hubitat.

Edit - Welcome. This is a very nice home automation platform with a great community.

I have never heard of anyone using ModbusTCP (or Modbus Serial) for home automation with Hubitat (or SmartThings.) If you want to integrate the two systems, I believe you may need to use a man-in-the-middle bridge device, like a Raspberry Pi (or similar), running something that can be used to talk to both systems. A quick search shows a ModbusTCP client for Node Red exists. There are quite a few users that have implemented Node Red as a means to integrate Hubitat (via the MakerAPI and Events webSocket) with other systems. I hope this at least gives you some ideas of what is possible.

This could/would be true for WiFi, but just so you understand a ZigBee or z-wave + wireless device is only connected to the hub and not to the cloud so if all you contacts were these you would be OK

Oddly enough my friend uses it with his DIY stuff.
But in fairness we come from industrial automation.

That stuff is straight out of the dark ages.

As an industrial automation professional myself, I use modbus all the time - both serial and TCP.

Anyway, if I were going to integrate a modbus device with Hubitat I would either:

I am a little biased, though. When I first setup Node-Red I was pulling/pushing data into Hubitat in <5 minutes (including creating the Node-Red docker container). While I've written a number of Hubitat device drivers, I can't say I could do one as fast as pushing in data via Node-Red.

I plan on buying a new house in about 8 year. Can you write a driver in that time?

Because my current house I use zigbee and Z-wave. And in my next house I plan on doing everything over cables. I really really hate wireless stuff. That's just me

Hard-wired does work great. I have a lot of Cat5 cabling in my house. It's all great until lightning strikes in the nearby area. I lost network ports on multiple devices and completely fried a few network switches. As you might surmise, none of my wireless devices were impacted at all!

So, you say "Yea, but what are the odds of a lightning strike nearby?" I thought so as well until it happened a second time ~2 years later.

So, you say "Yea, but what are the odds of a lightning strike nearby?" I thought so as well until it happened a second time ~2 years later.

The risk is higher along the Gulf coast, but especially in Florida.

Nothing will protect against a direct lightning strike, but I hope I'll be protected against surges caused by distant strikes. 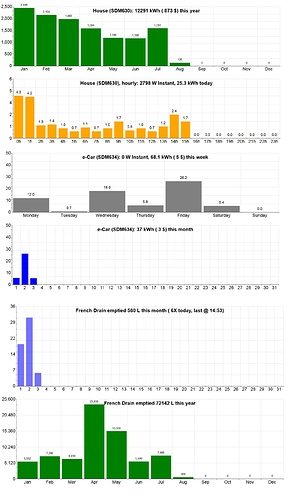 Hi Jason,
thank you for your reply. I'll probably stick to Node-Red. My plc are doing their jobs (controlling) and I'll retrieve data from the plc's and will send them slowly to Hubitat. I need to do that because I'm always very short in memory with my plc and I use it mainly for coding the rules, leaving a small amount of memory for display. For now I built some html pages with the data and upload them regularly. And I have mostly no need to change those settings, I have a geothermal unit, the thermostat has one setting: 22 celsius all the time. Heating in the winter, Cooling in the summer.