Hey, all. I have a bunch of Inovelli switches in my house, which all work great. I recently purchased an RGBGenie remote (the one with 4 on/off/dim switches and 2 scene buttons), and am trying to get each of the first 4 switches on the remote to control a different light in my house. Simple stuff. I set up a "Mirror Me" instance with the "Mirror" map so that the 1st switch on the remote will control an Inovelli dimmer.

The first problem I'm having is that the remote doesn't seem to play nicely with other ways of operating the switch. If I turn the light on and off from the remote, it's fine. If I turn it on and off from the Hubitat interface, fine. But if I turn it on via the interface and then try to turn it off via the remote, it won't work. It's as if the remote maintains its own state of what it thinks the light should be, and if it last turned the light off, then it won't turn it off again (even if something else turned it on in the interim).

Did I set it up wrong? Is there a better way to do this than the Mirror app? Is there a way to tell the remote what the light did ("mirror back", so to speak), so it's willing to send the "off" command multiple times in a row? Is this just a failing of the RGBGenie device?

My second problem is that it's very hard to dim the lights from the remote; it can only do on and off. But I have a feeling that if I get the first problem solved and then fiddle with the device parameters, I can get this problem handled. So it's mainly just the first one.

I have the remote and meh, it is very different from the switches we're used to. The remote sleeps... alot. So when you push the power button, it's always going to turn on the lights, so it typically takes me 2 or 3 pushes to turn off the lights, if they were turned on from the HE device page. The guy who sells these is great, give him a call he'll help you(number on RGBgenie manual) understand.

The remote, if used alone, works well, but when combined with other switches/commands can get confusing, becuase the remote has unique functionality.

PS- my understanding is that the remote(ZB-5028) is geared towards a mirror of RGBW bulbs, or at least mine is.

In my experience, it isn’t possible to “mirror back” to an end device. In my case the devices are Aurora rotary dimmers. What I did for turning on and off was to delete the mirror app and use Simple Automations to toggle the lights with a button push. Separately I used RM to track the dim level of the Aurora. Obviously you don’t have the same setup, but maybe you will find this helpful.

Thanks, Ken! Can you please explain the "I used RM to track the dim level" part in a bit more detail?

I used dimmer change on the controller as the trigger. The action I think was something like change level and there’s an option to track change. I’ll try to remember to post the rule when I get home in the morning.
Edit: this is the rule 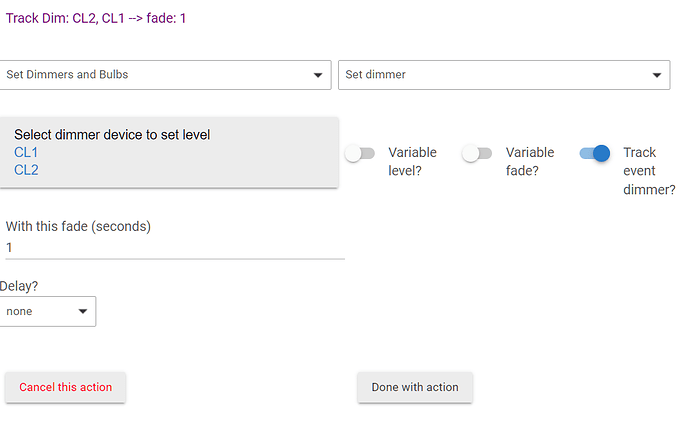 Thank you, Ken! Couldn't find the "Track Dim" without your help. Unfortunately I think this remote just doesn't have enough going on in the device driver to work this way. (It never seems to report a level, for example.) Shame. But your help is appreciated.