Is there any smart device equivalent for this fan / light switch where you only have a single gang box with the red traveler wire? If not, whats the recommended solution. We have 3 like this.. luckily the master has a 3 gang so I can put a fan switch and separate light switch. 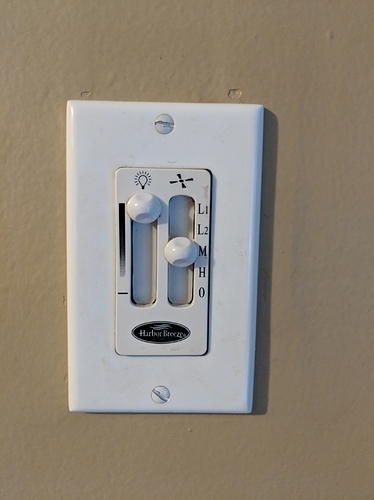 any thoughts would be appreciated!

There's a fan version of the GE C line. I saw a photo back during CES, but it's WiFi, and the ceiling light version hasn't even come out.

Then there's the iDevices Ceiling Fan & Light controller, which also is not out, and is WiFi

Neither of the above are Hubitat compatible, even if you could get them today, so drivers would have to be created. iDevices can be controlled via Homebridge/Hubitat and HomeKit automations, as I'm controlling two if their devices today using that method.

There's Insteon which isn't controllable directly by Hubitat, but you can expose it to HomeKit via Homebridge and then control it from Hubitat by way of Homebridge and HomeKit automation. Several of my devices are Insteon and I control them in this way. But you have to be in the Insteon world (e.g. You need their hub). You then add their Keypad Link for direct control or you could control by any keypad or a pico, but latter is a temperamental, as HomeKit Automations don't always work.

You can use a Hampton Bay Zigbee Fan Controller Driver (with Component Devices) and then use Pico or some other keypad to control both lights and fan, but the Hampton Bay have their issues.

There's a possible solution from Sonoff that is basically the same idea as the Hampton Bay controller, but it's WiFi, instead of Zigbee. However, all of us are still waiting for them to arrive (me included) so there is no confirmation we can even make this work or that it's any good.

As for Z-Wave or Zigbee fan and light controllers in one, I do not know of any. If you add Lutron integration to your setup, you can do a very simple double-gang plate and use a Z-Wave fan controller along side it. Similar to this, but with two obviously, instead of four. If I were to put in a Z-Wave fan controller today, this is exactly what I would do since I already have the Lutron Caséta Pro bridge. You just need to replace the ceiling fan lights with smart bulbs.

great stuff! thanks. On the lutron stuff - is that native in hubitat? I thought I needed a bridge?

not light compatible.. but at least its 4 speed.

You will need the bridge, since Lutron radio is proprietary, but once connected to the hub, the control is greater than what Lutron natively offers and pretty well anything the Hubitat hub can interface with can be controlled with a single or multiple Pico remotes.