I've been using an old deprecated app to control LED notifications on my Inovelli Red dimmmer/switches for a long time. It's called Switch Dashboard. I just started bringing a few new Inovelli Blue devices into the hub and unfortunately, Switch Dashboard isn't designed to work with them (purely a limitation of the app/driver combo).

What are you all using to control LED notifications, if not Switch Dashboard? Yes, I can write individual rules but Switch Dashboard is so much easier. Is there another app I'm not aware of? Thanks!

I’m also a Switch Dashboard user. For my Inovelli Blue Switch, I’ve had to use Rule Machine to control. The ideal scenario would be if @MFornander is still around the community and would be willing and able to update the app. Otherwise, it would be nice if someone could pick-it up to add the Blue switch.

I am unaware of other options, and like you will be keeping my eyes open!

With so much community development on the platform for seemingly everything you can think of, I'm really surprised at the void here. Like Sebastien I'm keeping an eye out...

I thought about writing an app like this but just settled on a rule. I can share that if anyone is interested, though it does mostly depend on custom commands in my Red and now Blue Series drivers (which I've also modified to be largely compatible; with a custom app, there'd probably be mess need for that). Still think about an app from time to time, given that the rule logic gets complicated with more than a fee devices. 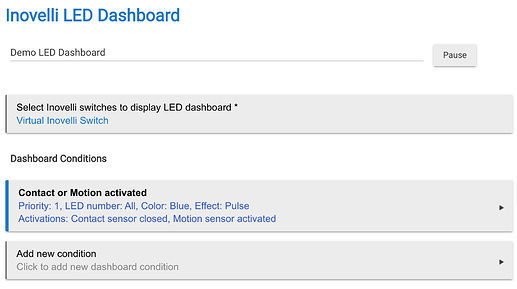 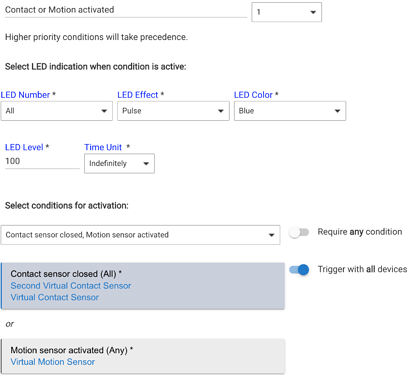 The first alpha code is ready for a little testing. The code is available from hubitat-drivers/LedMiniDashboard at main · bradsjm/hubitat-drivers · GitHub along with some documentation. You will need to install both applications (this is a parent/child type app).

A big thank you, this is what I love about HE. I will dive into it this weekend.

Awesome! Will do some testing and let you know what I find.

FYI - the beta version which has more triggers (button pushes and custom attributes etc.) is likely not going to be backwards compatible with the alpha configuration so please don't spend hours configuring things until it stabilizes.

The beta version is now out. A lot of changes are under the hood and unfortunately I had to change the configuration schema so it is not compatible with the alpha release configuration however there are some new capabilities and the new architecture allows for more capabilities in future.

I'm just digging into this now. Does this only support Blue series switches? My Red series switches are not showing up as available to add to the dashboard.

I'm just digging into this now. Does this only support Blue series switches?

Yes at present. However I do plan on adding Red series support too. However the original version does have Red support in the meantime.

Got it so for now I can just run both at the same time? That shouldn't be an issue I assume, thanks

No problem running both, I don’t have Red myself but it will just be for convenience when it supports both not to have to have both apps.

Perhaps I'm doing something wrong, but I cannot get the default (solid blue) LED state to return once an event has ended. I am sure the APP sees the event has ended because lower priority events will overwrite. ie. Priority 9 is engaged (solid red) by opening the garage door. Once the garage door closes the switch should return to solid blue but does not. And if I activate a priority 8 event by unlocking a door (solid yellow), the switch goes from red to yellow, but never back to blue.

Does this app automatically return to the default state once an event has ended, or rely only on the timer?

Like the original app, I think you are missing an explicit condition for when the event is over.

For example, condition set for all doors are closed should be set with an effect of “stop” with a low priority. Without an explicit condition, nothing will change.

Got it. I don't have a stop expression set up in my other dashboard app, it seems to do it automatically. However requiring it may be a better solution for more advanced dashboards. Thanks!

You can set a timeout or do an explicit stop, it does allow for more control but I'm thinking of adding a toggle option that can automatically stop (for less complex scenarios)