Hello. I’m new to home automation. My Hubitat will arrive in a few days. I’d like to start with garage door and lights automation.

I have 2 of them and planning to implement this solution Current Recommend Garage Door Opener/Closer youtube video posted by @iskren.p.petkov

What is the best place to buy all pieces needed for this project? In video price for peanut plug is $10. Lowest price that I found at amazon is $15. Link to Door/window switch posted at YouTube is no longer available. What will you suggest to purchase and where?

Light switch
After reading https://community.hubitat.com/t/best-switches-and-dimmers-reliability-connectivity-most-important/9598/2 for light switch I decided to go with GE/Jasco light switch. I found this from amazon GE 46201 Enbrighten Z-Wave Plus Smart Light https://www.amazon.com/dp/B07RRBT6W5/ref=cm_sw_r_cp_api_i_5bU2DbBXVGG7F Is a good one?

So depending on your garage open/close sensors can have problems, my garage door and rails were magnetic and having my contact sensor madly switching between open and close.

Prices are different than in the video. Tilt sensors are on sale now:

@helene7t7 thanks, will take a look!

Thank you for the questions @Strom. Best of luck with the home automation. It will make you feel definitely empowered and feeling that sky is the limit when it comes to it. Of course it comes with its own set of challenges.
First here is some advice on setups/option:

Let me know if you have any other questions

I would disagree that "zigbee is better than z-wave". I think zigbee devices tend to respond a bit faster, which is very important for motion sensors. Zigbee has a potential weakness of having frequencies that overlap WiFi frequencies.

If you are going to run any number of community apps, you might want to consider the concept of a "sandbox" hub where you run your community apps and another hub with just devices connected and "Official" apps. Others may comment on this approach.

I don't have a garage so I can't offer advice there.

That's my list of factoids.. but not even close to exhaustive

If you have a bad mesh, you will be much happier with Zigbee because you'll be re-pairing often and that is so much more satisfying with Zigbee. Building an adequate ZWave mesh is a little easier if you're looking to swap wall switches, dimmers and outlets. They are AC powered and you can't unplug them,

I have an adequate ZWave mesh built up over years of adding devices every few weeks or months. I kept away from Zigbee until I just couldn't wait any longer for a canopy Fan/Light and had to get 4 of the Hampton Bay Zigbee Fan Controller. Sticking any radio inside a metal bowl (canopy) is a horrible idea and the Community recommends 1 or more repeaters per fan, It's not like the Hampton Bay Zigbee Fan Controller are cheap, but adding repeaters makes them pretty expensive.

I have one Zigbee network in my home, and building out the mesh for the Hampton Bay Zigbee Fan Controllers has given me a good mesh, that allows me to add in Zigbee battery devices, like motion sensors.

I just did the garage opener. I used a 12 volt relay and an old 9v ac/dc converter. I installed a contact sensor on a hinge on the garage door. So when the garage door opens, the hinge falls to show the sensor open "Door Open". When it is closed, the sensor makes contact and shows closed. 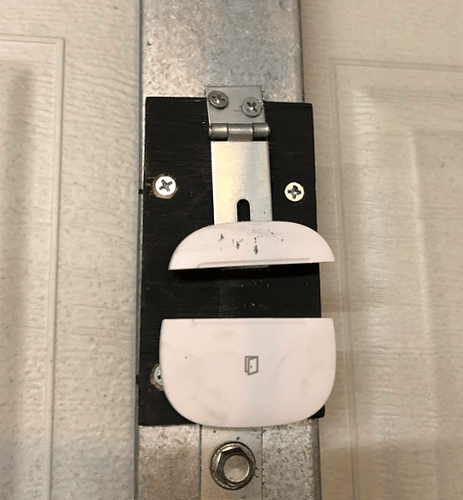 @dago5252 just so you know, the MP sensor is capable of being a garage door sensor without the magnet. You can use the three axis sensor to detect door open/close. There are settings on the device page for this specific use case.

I did not know that. LOL, I went through some trouble to get it mounted and I don't like the way it looks.

@dago5252 I actually thought it was a pretty ingenious way to mount it. I actually considered not saying anything because what you had, probably worked well.

I have a GDO and although I do not use a MP sensor in the garage, I have thought of using one. Since this can report an angle, it could be used to positively determine when the door was open.

Always good to learn. I am still working my around the automation world. I had to put a piece of wood behind the sensor because the magnet would stick to the door frame. I will probably leave it for now and change it later.

Thanks for the tip!!