I have some Inovelli Z-Wave Smart Scene Dimmer S2's installed but I am not using any of the advanced features.

How are you using the advanced features like energy monitoring and the led notification bar?

I have one controlling 6 motion-sensing but otherwise dumb Sengled floodlights. It occurred to me that I could use the energy monitor and led bar to notify me when the floodlights are triggered on by motion outside.

What else are you doing with the advanced features of these dimmers?

I use the notifications to alert me anytime my rollup garage door is open by the chasing red pattern. Also, if any of my exterior doors are open after 8pm.
I use the multi-tap functionality with the button controller app to create scenes like turn on all lights in the living area to certain brightness, or turn off other random devices around the house.

I'm not using energy/power monitoring at all; in fact, I have it disabled via the device/driver preferences. If you aren't using it, either, I'd encourage you to do the same--it will cut down on unnecessary Z-Wave network traffic (and, in turn, events on the hub). Probably not a big deal for a switch/dimmer where the usage isn't likely to fluctuate much (and still not something that should theoretically be a problem), but still something I like to avoid when I can. I'm really not sure what use most people have for metering with these devices, though if you have the switch (not dimmer--don't do that) connected to an outlet and are curious about the use of a device connected to it (maybe a fan or computer monitor or who knows what) and can think of some way to automate something else based on that...

I do use energy monitoring on a couple smart plugs: my washing machine to let me know when it's done and a dehumidifier for me to see history of how often it's likely to have been in "dehumidifying" mode, which I can infer from the power. These are both on "heavy duty" smart plugs marketed for this purpose, which I'm not sure this particular switch is rated to handle or why you'd have either of these devices on switched circuits in the first place. I've also heard of people use tricks like having power-metering switches on the circuit for an outdoor light with a "dumb" motion sensor and using the power readings from the switch to infer when motion was detected without needing to actually use a "smart" outdoor sensor--a creative workaround to basically get that motion detection into the "smart" world. But unlike when I saw people recommending that, there are now more smart motion sensors available marketed for outdoor use--though I suppose it's still not a bad use if you already have this setup.

The LED notification bar is something I've got use out of. I have mine flash specific colors/patterns when motion is detected at my front or back door (scary if it's in the middle of the night, but otherwise helpful to know when the mail comes or a delivery driver or neighbor is at my door, for example, without needing to rely on the doorbell). I know other people use it to show status like unlocked doors or open garages. You can probably think of other things you'd like to know, and you can use it with pretty much anything that you have in Hubitat, so I think it's pretty neat and flexible.

I also have the "regular" LED bar (not the "notification" parameter) change based on my hub's mode. This gives me an easy way to see the current mode and to know what to expect my lights (and other automations, but it's mostly lights that are affected) to do based on the current mode--e.g., if it's late enough that "evening mode" kicked in and they should be turning on as I move around the house. During night mode I set them to a dim red, both to let me know it's night mode and so the one in my bedroom isn't excessively bright.

Just a few ideas that might get you started (or stopped, in the case of power if you don't need it like me).

How are you using the advanced features like energy monitoring and the led notification bar?

Like @timrudd12 and @bertabcd1234, I have the same setup with the garage door (MyQ) and Schlage locks and also use the multi-tap functionality for just about everything.

I shared this in another thread, but it's definitely my favorite now that the lightstrip is out:

Basically, I set it up on most switches to have the config button send a scene command to turn on various scenes and act like a, "favorites" button.

Here are a couple of other popular use-cases for notifications that I've heard over the years:

I also have mostly Inovelli Red Dimmers with my C7 hub and want to turn off the energy reports. (In fact, I want to turn off all non-essential reporting to minimize hub traffic). But I'm not sure how to do that. I see we have param 19 that says:

It seems that param 19 for a Red Dimmer is Param 29 for a Fan+Light, right?

BTW, I also have 5 Black series and I don't have a Param 19 or anything like energy monitoring. Do they not report the energy used ever or is there some other way to turn that off for them?

As an experiment I tried setting 19 to 0 for the Red Dimmers and 29 to 0 for the Fan+Light. I see I am still getting a bunch of messages getting sent. Here is a group that came in for a Fan+Light:

Are those necessary or is a way to get those to stop being sent as well?

What firmware are you using? There was an update to either the switch or dimmer or maybe both that fixed a value of 0 not disabling the report, which to answer your question, is also what it's supposed to do.

My Fan+Lights are using firmware 1.36.

I don't have a laptop that I can attach a Z-Wave stick to as so many have suggested and/or the soldering skills to go into the hub and attach my own antenna.

As you'll see from the below, even though there was a warning that logging was being disabled it is still reporting in every 10 minutes:

Here are my param settings for it:

I'll chime in...I use the LED color bar to signal if the security system is armed.

This way, if you are walking through the house you can see that the LED bars are Red on all of the dimmers and know that the alarm is set...don't open a door as you will wake up the whole house and get a call from ADT! (I have Hubitat programmed to turn on specific lights when the alarm goes off and announce "Burglar Alarm" through all of the Sonos speakers...this way, I don't have to carry my flashlight AND my gun to look for the bad guy...just my gun.)

BTW, I also tried going the other way and maximized the values for 18, 19 and 20 (the bottom 3 lines of the log report below) but as you'll see, I'm still getting the reports in every 10 minutes.

I suspect your issue is unrelated to the preference or undelying Z-Wave parameter, as your logs clearly indiciate that the refresh() command is being called, followed shortly by a few Z-Wave reports you'd expect to get in response to that (two of which are a MeterReport, which are things like power, voltage, etc., though I don't remember which is exactly which). That will always happen when you ask for a report, which refresh() in your driver is likely doing (it does depend on which driver you're using, but it looks a lot like Inovelli's, and that is what theirs does--and proably what most do).

So, the solution is to find out what's periodically calling refresh() on this device, then either stop that if you want to or deal with this oddity if you don't. Every 10 minutes probably isn't going to hammer your Z-Wave mesh like truly frequent reporting does, but if you don't need it, you might as well try to stop it.

I don't need it. And any one report is no big deal. But when I'm in the "All" setting of the live logs I see a whole bunch of my devices all report in at virtually the same time. If I could get them to spread out more that would be better. I'm going to try to see if I change a setting for one in the group, wait a minute and then change a setting for another one in the group if that will spread them out.

So far I'm not having much, if any, luck in trying to spread them out. I'm posting a couple of screen shots of the flood I'm getting every 10 minutes. As you'll see, because of the number of devices that are getting refreshed at once the it looks like these reports dominated the traffic from 3:24:08 until 3:24:58. I'm wondering if I press a switch right in the middle of one of these message storms if that is causing my inordinate delays.

Is there any known way to spread them out? I see I have 2-3 of these bunched refreshes. Is there any known way to spread them out? I see I have 2-3 of these bunched refreshes.

The driver shouldn't be refreshing itself. (I don't use Inovelli's driver; I wrote my own, but this seems like odd behavior for any driver.) My assumption is that you have the device in use by some app, and the solution would be to either stop the app from doing a refresh (this really shouldn't be necessary in the first place) or modify the app to spread things out, but it's hard to say more without more information about what's causing these. You should be able to figure it out with the "In use by" section on the device page (or if you really think it's the driver/device itself, check "Scheduled Jobs" on the device page to see if anything looks suspicious). 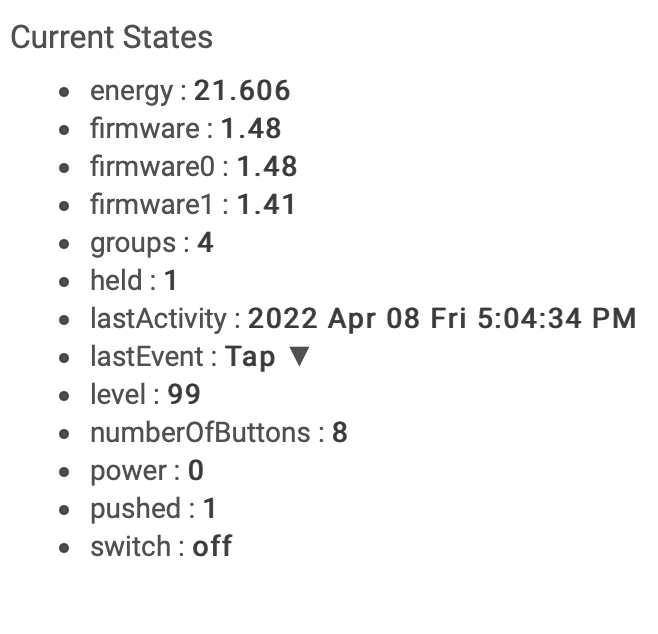 My wife's closet, is being used by Amazon Echo, Google Home, Hubitat Dashboard and a simple button controller app to turn it on to 100% with a 1 pushed (turn on) or turned on to 25% with a 7 push (the Config button).

It also says that no scheduled jobs are set.

Does that give you any idea and how/why the Refresh is being sent?

It also says that no scheduled jobs are set.

Does that give you any idea and how/why the Refresh is being sent?

No, other than that it's not the driver (as expected) because there are no scheduled jobs there.

It should be noted that this only shows things scheduled by the driver. An app that has a scheduled event that happens to involve the device will not show its scheduled jobs here; those will be with the app. Given the regularity, it certainly seems like this is a schedule, but I suppose something manual could also be doing the same.

Assuming that is all correct, one of the apps in that list must be doing it. I can't imagine that Button Controller or Dashboard would do it and I don't know that the Alexa Skill or Google Home integrations would either, though I can't say for sure. So I don't really have any good guesses. There is a hub-wide "Scheduled Jobs" list on the "Logs" page now that might help you make better guesses, or you could try disabling those apps one-by-one to see if it helps you figure anything out.

If you have more than one hub and are using Hub Mesh, then you'd want to do the same on the other hub(s), too.