Getting these installed today ((UNBOXED) Z-Wave Dimmer Switch (Red Series)) but confused about which drivers I should be using. Instal will be in a 3-way config.

I believe this is the one you're looking for: Hubitat/Drivers/inovelli-dimmer-red-series-lzw31-sn.src at master · InovelliUSA/Hubitat · GitHub

If not you can back up a level and you'll see them all in that repository.

@chefgoot - Thanks. So I should not be using the built-in drivers from Hubitat, right?

I should not be using the built-in drivers from Hubitat, right

Correct. I just installed one yesterday.

Inovelli developed drivers are part of Hubitat Package Manager. Install the drivers before including the switches/dimmers.

Correct. I just installed one yesterday.

Inovelli developed drivers are part of Hubitat Package Manager. Install the drivers before including the switches/dimmers.

Hmm - I got the source from the link above and used that to create the driver (the "Import" did not work, so I had to copy/paste). Should I have used the package manager? It appears that it is still in "beta" and doesn't come up in the built-in app search...

Should I have used the package manager? It appears that it is still in "beta" and doesn't come up in the built-in app search...

If you are using a lot of 3rd party drivers and apps it's one of the best newer apps around. No more checking to see if there is an update, no more copying and pasting code.

It's a little clunky to find new apps or drivers, but they're there. To find the Inovelli drivers, go to Install → Browse by Category→ Control and you'll find them.

If you've already installed an app or driver, you can match them up and then HPM will take over monitoring and installing updates.

If you've already installed an app or driver, you can match them up and then HPM will take over monitoring and installing updates.

Thanks again - I realized after my earlier reply that this was not a built-in app. I've added it and matched the drivers. I also figured out why the "import" was not working - I need to put in the URL to the "raw" code

I realize this is a driver thread, but I didn't want to start a new one, and might as well have all the Dimmer items in one place.

I have an Inovelli Red Dimmer that has been happy for a few months. It has started turning off almost immediately. No changes or automations beyond firmware updates . . . I have replaced the driver with the newer version from a few days ago.
In the event it shows an 'off' and attributes it to digital.

I have done a few of the fixes proposed, such as change all the defaults, save, and then change back and save. I have messed about with a few things trying to get it to stay on.

I have a resistor I purchased with the dimmer somewhere, should I go looking for it? Powering two 15w LED ceiling fixtures. The dimmer reports between 4 and 15 watts on it's usage profile. Non neutral setup. Again, it worked just like a light switch for several months. I haven't messed with anything but the firmware.

No 'smart' lights in the equation. Any ideas? 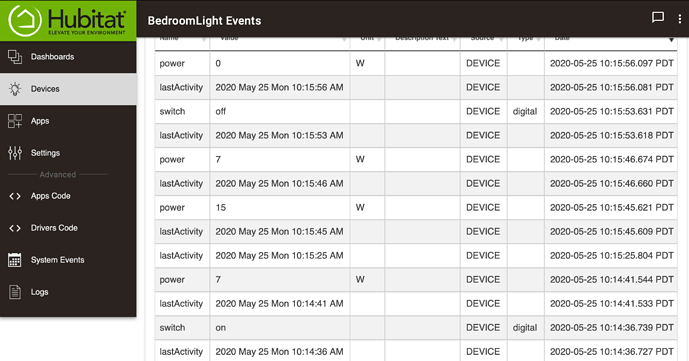 In this case I had turned on using 'on' in the device. but pressing the switch doesn't matter.

For Posterity.
I excluded the device. This did not fix the issue, it continued to turn off after a couple seconds.

At this point it was not turning off. Not sure which was the issue; my bet is on the ground or the lack of neutral.

I have readded the device and it seems to be running.

Info on loads - now that the neutral is hooked up, I get more accurate W measurement, it's around 75 watts, which is what i expected to see, so it isn't a resistor issue.

closed until it happens again