I'm planning to move to Hubitat

That should certainly work OK. Maybe someone else can comment if there is a better way.

Sometimes it's lag, but mostly the reason that leads to my migration is about lacking many needed features.

For the mobile app, it shows the customized dashboard instead of the native app like Smartthings, right?

it shows the customized dashboard instead of the native app like Smartthings, right?

yes, in HE you only provide the app the devices you want it to see. It's not a admin tool, it's a customisable user interface as it should be, if you require.

Like SmartThings before the great "Samsunging" HE is extremely customizable. There are a ton of excellent 3rd party apps and drivers available.

If you have an Android phone this is a very cool 3rd party dashboard for HE..

How is the interactive speed of the dashboard in iOS guys?

I dunno maybe @danabw can chime in - he's part of the cult of Apple I think..

I am not using the HE DB as my setup is more oriented toward automation than remote control. I do have a dashboard that controls my HE devices via a separate system called Node-RED that I can access anywhere via a locally running VPN (WireGuard). The NR DB is more rudimentary than HE's but for my use-case it's fine.

you could also have a dashboard per user

I just recently made the transition, but for reliability reasons. It seemed ST had some sort of system-wide issue weekly, and I had little local issues all the time.

Automation is too simple, doesn't allow me to create complex rules.

Have you tried webcore on ST? It also exists on HE, and it runs locally instead of on someone else's computer.

Can't set permission for each user.

My HE doesn't seem to let me add additional users at all. However, you can assign dashboards to people to limit what they can control. The dashboards can either be in the cloud or local, from the looks of it.

This may still be the case, but dashboards sure are customizable. You can access them inside the app, or with a only a web browser.

I like it so far. I ran into a few devices that don't work with HE, but did with ST. I'd check the compatibility list, or search elsewhere for drivers to prep. I also ended up purchasing a z-wave stick to include some S0 devices without security to increase performance and reduce issues, which was recommended by another user.

For using multiple hubs, is it possible to let devices from a hub to interact with devices of another hub?

There's an app for that; I haven't tried it. I just transitioned one or two rooms at a time.

Regarding creating rules, is it possible to create a rule to send a push notification to a specific member when a trigger is activated?

It looks like I can, but I only have one device attached at the moment. You can for sure do this with pushover, if you can use the native app in this way.

The new ST mobile app too slow? Really? If I had to criticize the new app, speed would not be high on the list.

For me, it's slower for me than using a web browser to control HE. We are in agreement; the app speed doesn't seem to be an issue in ST. For me, adding a scene shortcut on the android launcher reduced any speed concern (so you don't have to open the apps at all).

Overall, I'm happy with my purchase. The grass wasn't always green during the transition, so plan on a little transition woes.

I use Apple devices (iPad and iPhone) and I find it extremely fast. I would say maybe somewhere between 100 and 300ms from press to click (light turning on)...

I use the dashboard on iPhone and iPad and it's pretty zippy.

maybe @danabw can chime in - he's part of the cult of Apple I think..

Oh Nooooooo...I remember standing in line to purchase my first smartphone, and it was a Motorola Droid v1.

I have a couple i-devices (iphone and ipad), but really only use Android.

When I moved from ST to HE I used HubConnect to ease the transition. HubConnect allows you to control devices paired to your ST hub from your HE hub. As I built my HE automations I used HE groups instead of individual devices. That way when I moved devices from ST to HE I just added them to the group and I didn't have to mess around with a whole bunch of automations.

Many folks (me included) do not add zigbee bulbs directly to HE but rather use a secondary hub (in my case Phillips) on a different channel to control zigbee bulbs. Zigbee bulbs tend to cause havoc because they will repeat ZLL OK but don't do a great job on ZHA. There's really nice integration between HE and Hue.

Here's one of my dashboards...taken from a browser not a mobile device but basically the same thing. I'm colorblind so mine tend to be less colorful than others 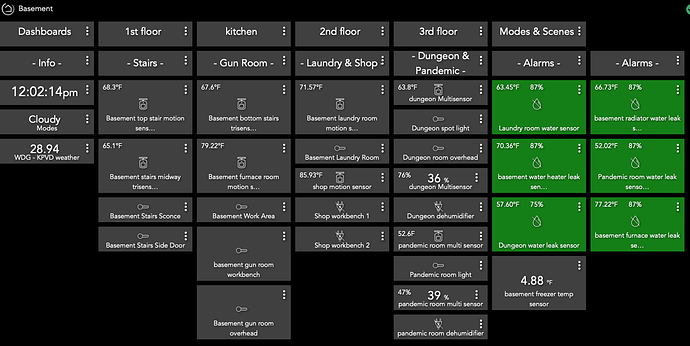 You are so fickle.

The only issue with a slow migration is that during the transfer you can cause ST hub issues as you remove more and more devices. If going this approach I like to add a couple of repeaters to HE at the beginning radiating outward then from the old hub working starting farthest away start excluding then including devices working inward.

I owned an Apple Lisa when I was in college. That's hard-core Apple cult material.

I fried an Apple ][ on my very first programming job by plugging in the printer card backwards.. very sparky. Have avoided most things Apple until recently still somewhat traumatized...

If you want to use a dashboard on Apple, I can recommend an approach that I just completed for a client.
I used the following user developed bridge to send the Hubitat data to HomeBridge (which runs on a Raspberry PI:

[RELEASE] Homebridge Hubitat v2.0 I'm happy to release the new version of my homebridge-hubitat-tonesto7 Upgrade Notice: Due to the changes in the plugin API (switching from legacy to dynamic) you can not directly update the plugin, you will need to add as a new accessory and setup your devices/automations/scenes again. On a positive note, you can use the same Hubitat app instance as long as you update it to the latest code. Changes Plugin [NEW] Completely rewrote the entire plugin from the…


That sends the data over to a mounted IPad at the site.
The Homekit application on that IPad then allows all the members of the family to share devices.
(This uses a Raspberry PI that I was using anyway, in order to do Hubitat text message and Hubitat email notifications.)
After setup, this works very seamlessly.

Other people here use the MakerAPI to send data over to HomeBridge and then to Apple:

This new plugin does not rely on the "Homebridge App" in Hubitat and utilizes the MakerAPI and it's event stream to communicate with Hubitat. A few caveats upfront: You will have to redo all of your room assignments in the Home App on your phone Installation: 1. Hubitat MakerAPI App Configuration Under the Hubitat Web Interface, Click on Apps in the left side menu. Click on the button +Add Built-In App Select Maker API from the list of apps Enable Allow Access via Local IP Address T…

....there are lot's of alternatives.... due to the inherent flexibility of the Hubitat platform

I resemble that remark. I started my migration right before Christmas and had no major issues transitioning Zigbee devices.
Z-Wave has been a ride, since I found that some of my older (hardwired) devices will only exclude from SmartThings if they are within a few feet of the hub. 5 devices (+ 3 repeaters) remain on SmartThings. Amazingly, they still work, although they take incredibly tortuous paths. One device claims that it is routed through the same repeater twice!