HSM flashes lights for how long?

Trying to add the "Flash" capability to a driver for use with HSM, need some more info.

This is sort of a two part question. First, the "Flash" capability, the flash command makes the lights flash at X rate. But what is the expectation of how/when to make the lights STOP flashing? Should the driver have a set time? Does the user need to send the flash command again (or on/off manually) to make it stop?

The only post I could find about this was a user where their lights flashed indefinitely after setting it up in HSM, but it was a few years ago so whatever happened may be fixed by now.

This is all I could find about the capability which I think is relatively new? 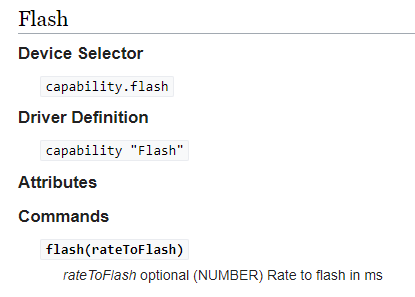 First, the "Flash" capability, the flash command makes the lights flash at X rate. But what is the expectation of how/when to make the lights STOP flashing? Should the driver have a set time? Does the user need to send the flash command again (or on/off manually) to make it stop?

I think the intent is indefinite until the user stops it somehow. Since there is no explicit command, I've done what I can find as apparent convention. We know that for the Generic Z-Wave Central Scene Dimmer, whose code was provided as an example, these commands are on(), off(), or setLevel(). For color/CT-capable devices, I assume this might also include setColor() and friends plus setColorTemperature(), though convention is not as clear there.

However, some devices have a native flash(-ish?) support an an inherent or perhaps settable but not indefinite timeout. Hue bulbs, and probably many other Zigbee bulbs, are one example (the lalert effect on Hue bulbs, which I assume might stand for "long alert" or something to distinguish it from the single-flash alert effect, which I think corresponds to the Zigbee Identify feature as you might get when tapping a bulb in the Hue app to figure out which one it is). It's something like 20 or 30 cycles, and that's it.

So, maybe it really just depends on the device. Definitely unclear, in any case, as you mention.

If the device is capable, I'd say indefinite is probably the expectation generally, though.

(Also, the capability that standardized this command is relatively new, but the command has been around a while as a common custom command for some time. I didn't realize that parameter became required, though!)

Yeah I was going to make it stop if any other sort of on/off type commands are done. Also if you send the flash command again while its going I have it stopping, but maybe that is not good. I think I am going to add a safety timeout as well to prevent it going for forever unintentionally. Maybe 30 seconds or maybe calculate 20 cycles based on the rate being used.

Really need to know what HSM does I guess. Also HSM standard rules only allow you to pick a device with "Flash" but custom rules allow you to pick any switch. So I don't even know if both of those do the same thing or not...? Was hoping I did not have to create and then trigger HSM alerts just to figure out how it works.

I have a special request to have it work with HSM, so don't want it to get all setup and then the lights flash forever and don't stop!

Had to do testing to answer my own question. For both the built in and custom alerts it appears that HSM just fires off the Flash command when the alert goes off. The only way it stops is if you "Cancel Alerts" in HSM. When you cancel the alerts it just sends an "on" command to the device. So apparently turning the device on is the expected way to make it stop.

I guess I will take the feature to press the button a second time to cancel out, just leave it with on on/off, and also a built in 30 cycle timer (or 4 minutes whatever is higher) as a backup so it does not just run forever and kill your zwave mesh.