I bought this Zigbee switches

but without succes to work in HE. I sniffered comunnication with Tuya Hub. 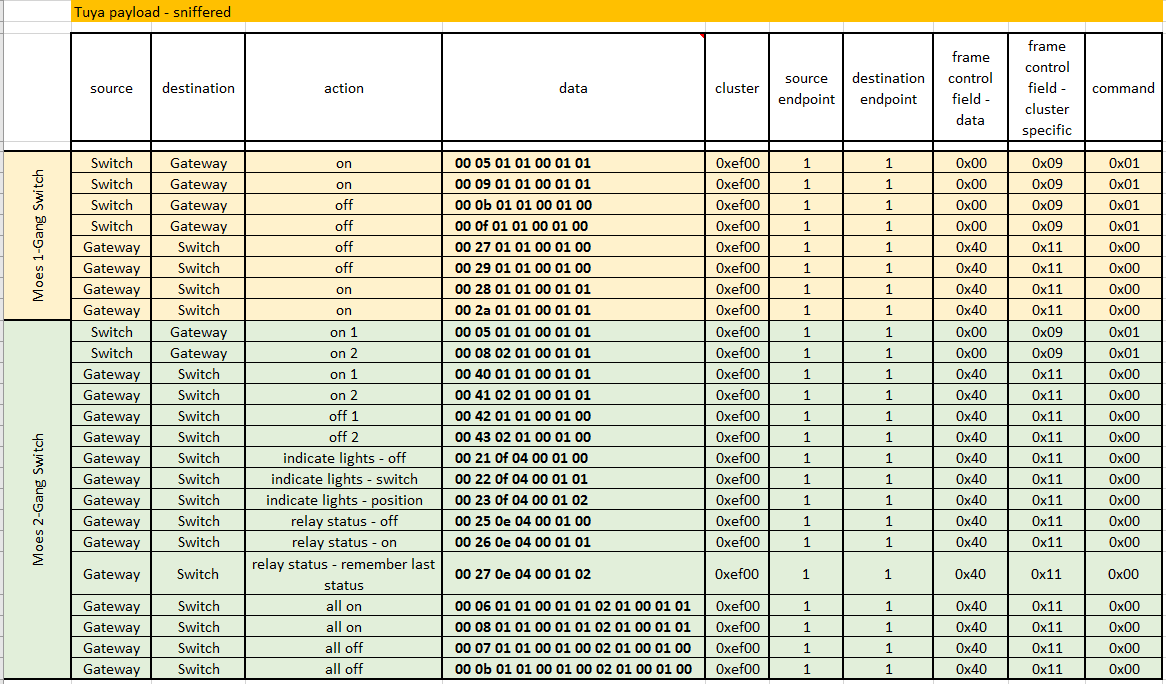 Can anyone help with drivers for this weird EF00 cluster? I didnt find anything usefull.

Hello!
I was able to make work a Moes 1 Gang Switch with:

The generic Zigbee Switch Driver did not worked for me, then tried the @markus expanded driver : Zigbee - Generic Switch (with Presence)
https://raw.githubusercontent.com/markus-li/Hubitat/development/drivers/expanded/zigbee-generic-switch-expanded.groovy

This gave me some errors related to the groovy random function , and did not worked as expected: after solving the error, I could turn on /off the switch from Hubitat but manual operation on the device did not reflected on the dashboard properly, especially the 'On' status.

Noticed from the logs that 'On' event update was received but also the switch reported additional status payloads with off command and another unknown command which turned off the dashboard tile after the on command event received from the manual switch operation .

Your sniffer was very useful to note that genuine 'On/Off' commands reported from the switch to the gateway have '01' on the forth payload data!!, so implemented a workarround which is working for me, modifying the code of @markus ( all credits to markus!, maybe he can do some adjustments to his code with a better solution for this case).

The modified driver code is on the link bellow:
https://github.com/rbertolig/Hubitat/blob/release/drivers/expanded/zigbee-generic-switch-expanded.groovy

Need some tweaks but everything is working now

Hi!
Thanks for the driver!, installed and setup the device using it, but could not make it work.

I can turn on/off from the device page, but cannot operate the device from the dashboard, neither see the device status is updated on dashboard after the manual operation on the switch side.

Initialized the device manually with the corresponding button on the device page but error and behaviour remains.

Are you tried latest 1.31 driver? Yesterday was driver updated and fixed this issue.